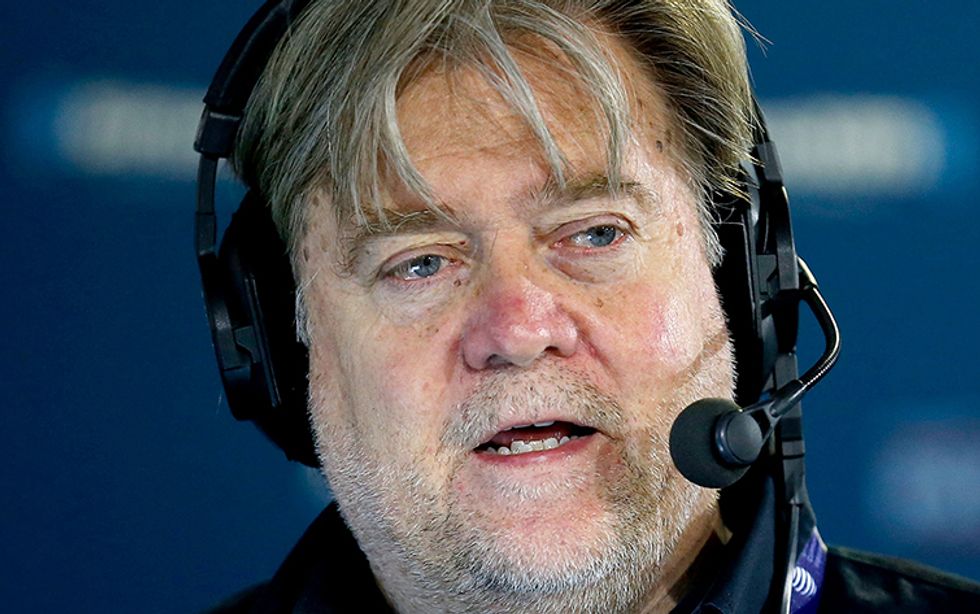 Add this to your "Wow, how surprising" files: Steve Bannon, Donald Trump's chief political advisor, is a big fan of a frankly racist novel, The Camp of the Saints, a dystopian what-if depiction of Europe being overwhelmed by a literal invasion of dirty brown people who take over and ruin civilization, because that's simply how immigration works. The 1973 novel by Jean Raspail has become something of a touchstone on the right, even getting respectful reviews in "respectable" conservative outlets like National Review, which found ominous parallels between Raspail's vision of scary brown people taking over Europe and the arrival of thousands of unaccompanied Central American refugee children in 2014.

You see, since the right pretends The Camp of the Saints is about the dangers of unrestricted immigration, not a tale of racial anxiety, the book has found a niche with conservatives who can praise it as a story of "cultural," not racial, peril. It probably helps that Raspail is French, and therefore espouses a sophisticated Continental form of racism. And for all we know, it may actually be more "literary" than The Turner Diaries, which doesn't pretend to be anything than a neo-Nazi recruiting pamphlet in pulp novel form. The Southern Poverty Law Center warned in 2001 that Raspail's novel was becoming popular with American rightists who would never openly embrace the hick racism of The Turner Diaries. Not surprisingly, William Pierce, author of The Turner Diaries, praised The Camp of the Saints as "one of the most famous, popular, and important racialist novels." Not sure that's included in the back-cover blurbs.

Raspail himself, now 91, "has long been on an obsessive quest to defend the West's racial and cultural purity," according to Shikha Dalmia in an article from last year on the novel's sudden popularity among some conservatives. She's not a fan, calling the book's story line "so cartoonish that even Mad Max writers would cringe." We read The Turner Diaries ages ago to see just how awful it was (very), but we haven't read Raspail's book-shaped object, so we'll share some of Dalmia's plot synopsis:

The central plot line of the book involves an armada of "kinky-haired, swarthy-skinned, long-despised" Indians who, exhorted by a "turd eating" god-man to get a piece of the "white man's comfort," board a fleet of rickety ships to France, the land of "milk and honey," to escape poverty and illness.

The sojourners are hungry and diseased. But that evidently does nothing to dull their satyr-like sexual appetite since these are people who, in Raspail's telling, "never found sex to be a sin." So their journey becomes one long orgiastic ride as they hump everything in sight. [...]

About a quarter of these "Ganges people" succumb in this journey of "dung and debauch," but the rest arrive on the shores of the beautiful French Riviera on Easter Sunday. Unfortunately, mowing them down (Raspail's preferred response) is not an option for the "fragile Western World" reeling from the Holocaust and wracked with liberal guilt over colonization. Instead, the lily-white French, seeking redemption, dispatch rescue crews to bring these grotesque masses to safety like "a million Christs."

Huh. So far, sounds like every bit as lame a premise as The Turner Diaries, only with immigrant hordes instead of a despotic Jewish-controlled government seizing all the guns, but about equally sophisticated. The white-culture-defending hero of The Camp Of he Saints is, unlike ordinary average guy Earl Turner, a professor named Calgues who loves him some Mozart, so Raspail has given his protagonist a class advantage over the other racist screed. Perfesser White Civilization joins an armed vigilante resistance, but it's too late -- the floods of inferior people swamp Europe and the rest of the white world in short order, raping and killing all the naive European welcoming them with open arms (Raspail wrote about cucks before condemning cucks was cool!), and apparently the novel ends with the death of white culture, minus the deadly revenge fantasies of eventual white triumph in Turner.

HuffPo notes The Camp of the Saints only presents its white characters as fully human, while Raspail lingers in glorious revulsion on images of brown people's essential nastiness:

The Indian armada brings “thousands of wretched creatures” whose very bodies arouse disgust: “Scraggy branches, brown and black … All bare, those fleshless Gandhi-arms.” Poor brown children are spoiled fruit “starting to rot, all wormy inside, or turned so you can’t see the mold.”

The novel is, as HuffPo says, a great favorite of the man described as "Trump's brain"; Bannon referenced it all the time when he was the CEO and top media voice of Dead Breitbart's Home for White Fear:

Just in case you don't watch the vid, a few samples:

“It’s been almost a Camp of the Saints-type invasion into Central and then Western and Northern Europe,” he said in October 2015.

“The whole thing in Europe is all about immigration,” he said in January 2016. “It’s a global issue today — this kind of global Camp of the Saints.”

“It’s not a migration,” he said later that January. “It’s really an invasion. I call it the Camp of the Saints.”

For once, we're sort of glad Donald Trump doesn't read, though with Bannon using The Camp of the Saints as his guide to immigration issues, we doubt there's any difference. Though it would be bitter fun to hear Trump praising the novel during a press conference and then being surprised anyone had a problem with it.

How awful is this novel? Linda Chavez, the very anti-immigration conservative who worked in the Reagan and Bush I administrations, read the thing when it was published in the '70s in its first American version, and describes Camp as "really shockingly racist,” adding in comments to HuffPo, "and to have the counselor to the president see this as one of his touchstones, I think, says volumes about his attitude." Chavez served for a while in the late '80s as president of the group U.S. English, which pushed for designating English as the official language, but left the group in disgust after learning much of the group's funding came from a pro-eugenics group and from Cordelia Scaife May, who helped publish American editions of Camp of the Saints. She recalled seeing staffers carrying the book around the offices, which was a dead giveaway U.S. English was no place for a nice conservative who simply wants to cut taxes on rich people and preserve a Republican majority, but not go into full-on ethnic cleansing. The HuffPo piece closes with Chavez warning that Bannon's influence on Trump on matters of immigration and race is "extremely dangerous”:

She said Trump’s immigration moves are “a kind of purging of America of anything but our Northern European roots.” Bannon, she added, “wants to make America white again.”

Huh. Trump supporters will no doubt wonder why Chavez would say that like it's a bad thing.