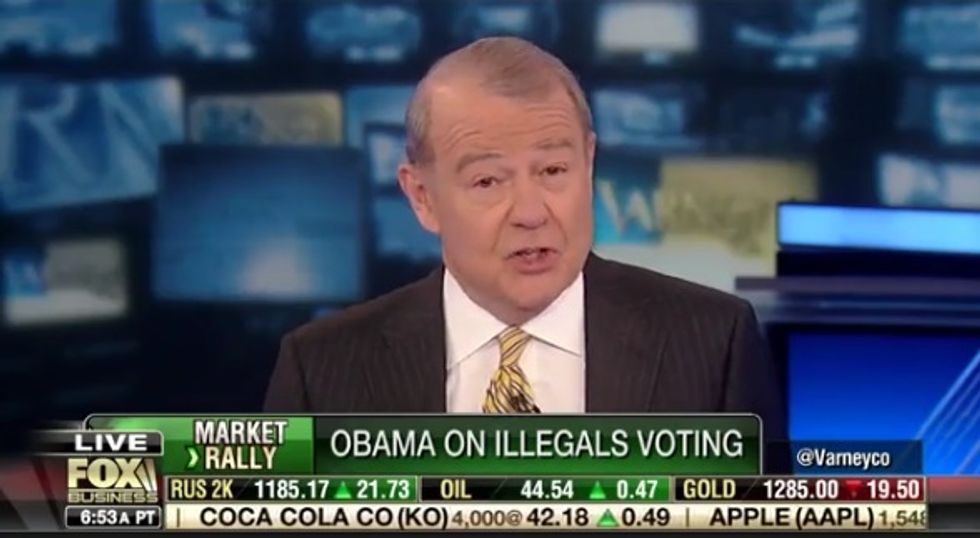 Fox Business's lying crapsack Stuart Varney is very upset the lamestream media has not picked up his lying crapsack of a story about how Barack Obama is encouraging undocumented immigrants to go ahead and vote, because shouldn't that be a huge story, the President of the United States encouraging illegal voting by illegal aliens????? It would indeed be a very shocking story if Barack Obama had actually said that! Except of course for how Obama said nothing of the sort, and the lying crapsacks at Fox Business instead edited some video to make it look like Obama was telling those terrible illegals to go out and vote.

The heavily edited video up is up top; in it, Varney pretends to be astonished the president “appears to encourage illegals to vote, and he promises no repercussions if they do,” and chides other media for failing to run with Varney's lying crapsackery. The reality, via Alex Griswold at Mediaite, is considerably less shocking, possibly because Barack Obama is not as stupid as Fox Business viewers. Let's play compare and contrast! In the clip, here's how the interview goes:

Interviewer Gina Rodriguez: Many of the millennials, Dreamers, undocumented citizens — and I call them citizens because they contribute to this country — are fearful of voting. So if I vote, will immigration know where I live? Will they come for my family and deport us?

Barack Obama: OBAMA: Not true… The sanctity of the vote is strictly confidential…

But in reality, there were a few words taken out, if you can believe that, which of course you can because you are well aware Stuart Varney and his crew at Fox Business are a bunch of lying crapsacks. Here's the full transcript, with the deleted words bolded:

Rodriguez: Many of the millennials, Dreamers, undocumented citizens -- and I call them citizens because they contribute to this country -- are fearful of voting. So if I vote, will immigration know where I live? Will they come for my family and deport us?

Obama: Not true. And the reason is, first of all, when you vote, you are a citizen yourself. And there is not a situation where the voting rolls somehow are transferred over and people start investigating, etc. The sanctity of the vote is strictly confidential in terms of who you voted for. If you have a family member who maybe is undocumented, then you have an even greater reason to vote.

Gosh! Someone who is not a lying crapsack can probably tell, through the magic of having all the words, that Obama is talking about legal voters who are citizens voting legally, as citizens do. That is somewhat different! Now, maybe Mr. Obama should have corrected Ms. Rodriguez on her own fanciful standard for "citizenship," because "contributing to this country" is not what makes a person a citizen. Were that the case, a lot of people who were born here or naturalized would have their citizenship revoked, like maybe the lying crapsacks at Fox Business Network, who have actively made America worse (that would include naturalized citizen and lying crapsack Stuart Varney, whose vote counts just the same as a truthful non-crapsack-American's).

In addition, Griswold notes, Fox Business left out an additional section of the interview where Obama went on to specifically encourage "Latino citizens" to vote to protect the interests of undocumented relatives "who may not have a voice, who can’t legally vote." So, yes, he's guilty of telling relatives of noncitizens to vote.

Which is still legal, for now, at least until that "Taco trucks on every corner" guy is appointed head of Homeland Security.

Our friends at Crooks & Liars say this complete fabrication should lead to Fox Business having its "broadcast licenses suspended immediately," but there's a teensy problem with that idea: as a cable channel, Fox Business Network isn't subject to FCC regulations at all. It doesn't have a broadcasting license to suspend. It should be shunned by consumers and advertisers, but that seems unlikely. Somebody's keeping the gold and silver exchanges in business. And buying a load of crap from Fox Business Network, to boot.