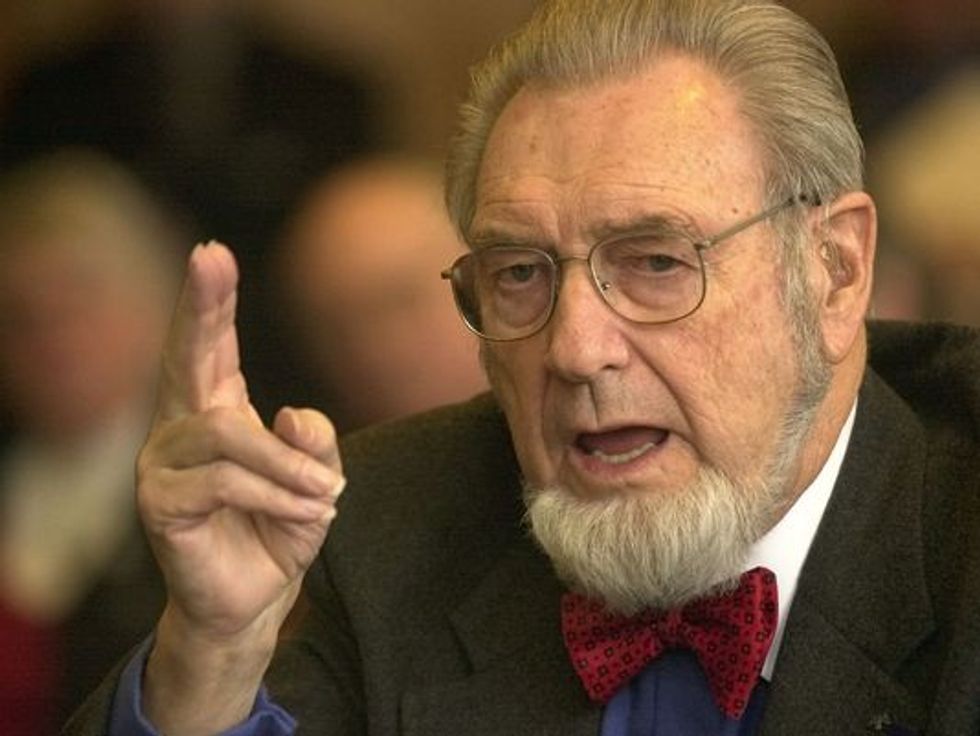 C. Everett Koop, the Surgeon General whose anti-abortion stance appeared to be a feather in the Religious Right's cap when Ronald Reagan appointed him in 1981, but whose subsequent career as a crusader for science-based policy turned out to be a big black eye for the tobacco industry and gay-haters,died yesterday at the age of 96. Let's take a few minutes to remember a man whose insistence on putting science ahead of ideology surprised the liberals who initially opposed him and flummoxed the Culture Warriors who eventually came to consider him a traitor.

You'll want to read the NY Times obit for the Big Picture stuff; we're going to spend a little time here with this lovely remembrance by Michael Specter for the New Yorker. Specter notes that Reagan's appointment of Koop looked, at first, like a triumph of political hackery over competence: the guy had written a "strident 1979 manifesto, Whatever Happened to the Human Race?, [that ] helped establish the evangelical base for America’s anti-abortion movement." Worse, Koop had virtually no experience in public health or setting policy. The Religious Right was delighted that one of their own was going to be in at least a symbolically significant role, and Democrats were just as worried for the same reason. Jesse Helms led the cheering for Koop, and Henry Waxman "called him 'scary' and 'intolerant.'"

The year-long fight over Koop's confirmation was a preliminary skirmish in the Culture Wars, and helped set the stage for the all out fuck-tussels over confirmation that finally became business as usual with Reagan's 1987 nomination of the late Roberk Bork to the Supreme Court. As Specter says, Koop ended up subverting just about everyone's expectations of him:

Koop turned out to be a scientist who believed in data at least as deeply as he believed in God. And he proceeded to alienate nearly every supporter he had on the religious and political right. To fight the growing epidemic of AIDS, Koop recommended a program of compulsory sex education in schools, and argued that, by the time they reached third grade, children should be taught how to use condoms. He did not consider homosexuality morally acceptable -- and he never changed his view about that. But he understood that viruses have no religion or sexual orientation and that H.I.V. was a virus. He campaigned vigorously against smoking in public spaces, saying that tobacco should be eliminated from American society by 2000. He was the first public official to state categorically that second-hand smoke causes cancer. Tobacco companies -- and Jesse Helms, their biggest congressional ally -- could hardly believe Koop’s treachery.

On abortion, the issue that Reagan and Koop agreed on most completely -- Koop "had compared abortion to the killing of Jews at Auschwitz" -- the Believer in Koop once again conceded to the scientist. Assigned to prepare a report on psychological consequences of abortion, Koop

took to the road and met with hundreds of activists on both sides of the issue and reviewed hundreds of scientific publications. Then, for a while, there was silence. One day a member of his staff called me and said that Koop had decided to issue no report.

“Huh?” I said. “How can that be?” Simple, I was told. Koop was unable to say whether, with any scientific certainty, an abortion was always more damaging than the alternative. He refused to issue the report, because, as he told the President, there weren’t enough data to support either “the preconceived notions of those pro life or those pro choice.”

Should Koop have at least issued that equivocal report? Probably. Should he have been even quicker to depart from the Reagan policy of silence on the AIDS crisis than he was? Again, probably, but he truly was the only voice in the Reagan Administration who was saying anything at all, and his influence finally brought that deliberate neglect to an end. This was a man who reminded us to be gentle during buttsex, so as to avoid AIDS, and so he may well be some sort of Wonkette Patron Saint.

We can't come up with a better closing than Specter's, so we won't even try:

In this era, during which progress, facts, and science are under unrelenting siege, it is thrilling to remember that even ideologues can love the truth. R.I.P. Dr. Koop.