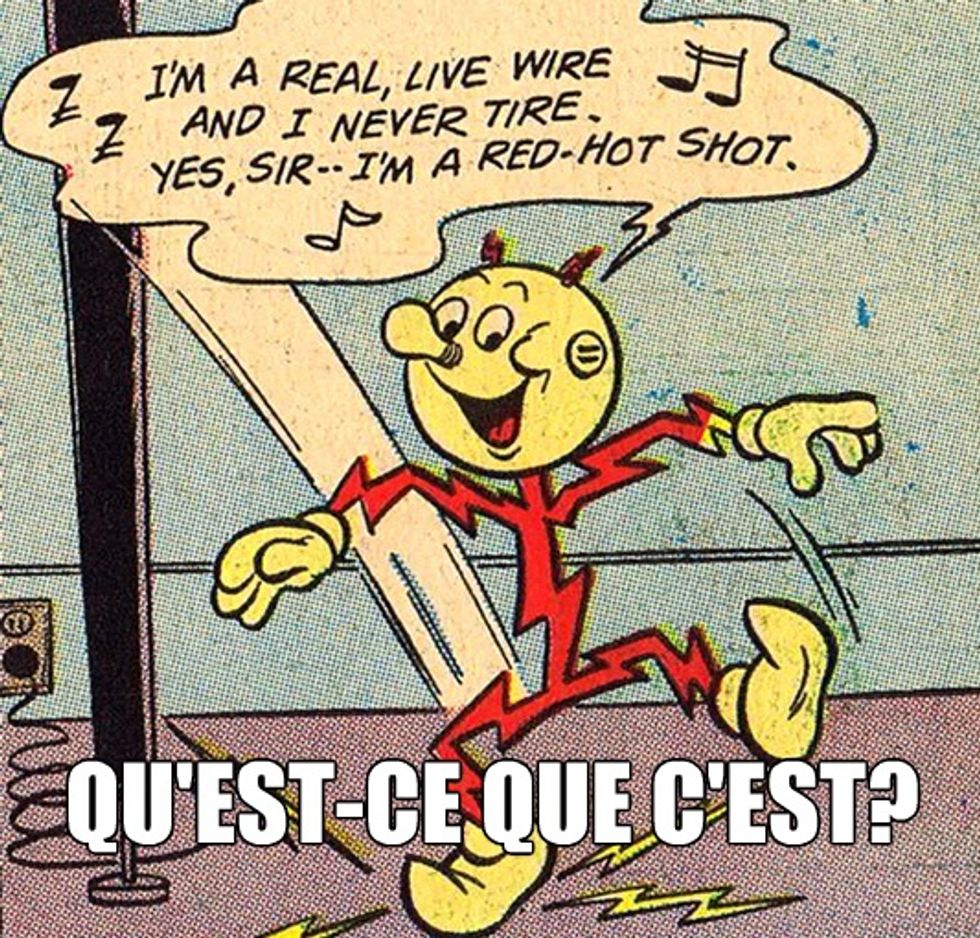 It's been over a month since Hurricane Maria hit Puerto Rico, and three quarters of the island is still without electrical power. After hurricanes hit Houston and Florida, power was restored quickly after hordes of utility workers from a coalition of power companies descended on the areas to erect poles and reconnect lines, but that's not the case in Puerto Rico, which lost almost its entire power grid in the storm. Instead of activating that "mutual aid" arrangement with other utilities, Puerto Rico's territory-owned utility, Puerto Rico Electric Power Authority (PREPA), instead awarded a $300 million contract to an itty-bitty company in Montana, Whitefish Energy, what has been in business less than two years and, at the time of the hurricane, had only two full-time employees. If you're asking "What The Actual Fuck?" you're not alone.

This is not how power gets restored after most natural disasters, as some surprisingly in-depth reporting by the Weather Channel explains:

Typically, immediately after a disaster, the American Public Power Association -- a public utilities trade group -- emcees a conference call with its membership -- 1,100 public utilities across the country -- to get all the needed line workers and bucket trucks to the stricken area as soon as possible under what are called mutual aid agreements. For instance, the public power association facilitated the rapid deployment of many thousands of workers and their equipment to Texas and Florida after hurricanes Harvey and Irma struck.

Not in Puerto Rico! When APPA started talking about getting the usual process in gear, PREPA officials said, nah, we got this, and informed the other utilities of the contract with Whitefish, which has never tackled anything on this scale before. FEMA and the Army Corps of Engineers weren't involved in the decision, either. Industry and government people who've handled disaster recovery are cocking their heads to the side like puzzled Labrador Retrievers and wondering just what the hell is up here:

“The fact that there are so many utilities with experience in this and a huge track record of helping each other out, it is at least odd why [the utility] would go to Whitefish,” said Susan F. Tierney, a former senior official at the Energy Department and state regulatory agencies. “I’m scratching my head wondering how it all adds up.”

Whitefish isn't exactly a big name in the utility world. Prior to getting the Puerto Rico contract, the biggest federal job it had handled was "a $1.3 million deal to replace and upgrade parts of a 4.8-mile transmission line in Arizona," says WaPo. And it had 11 months to get that done. But the company insists it's perfect for the job, since it has experience working in mountainous areas where you can't just drive up in a bucket truck.

It's looking like the selection of Whitefish had very little to do with its particular set of skills, though. Whether this is a matter of corruption or just plain incompetence -- or why not both? -- remains to be seen, but it's looking pretty strange.

PREPA executive director Ricardo Ramos didn't answer WaPo's emails asking why PREPA had gone with Whitefish instead of the usual mutual aid approach, but did tell reporters that Whitefish was simply the first contractor "available to arrive and they were the ones that first accepted terms and conditions for PREPA." He also dismissed concerns about Whitefish's ability to do the job as probably just nasty talk from the company's competitors.

That's slightly different from what Ramos told E&E News, which reports on energy and the environment, earlier this month when he explained Puerto Rico couldn't have afforded the upfront payments or reimbursement guarantees needed for assistance from the mutual aid arrangements:

The day that the Corps of Engineers showed up and offered the assistance, we immediately accepted because we knew that financially it was a better model. The benefit is that I don’t have to spend the remaining dollars that are needed for recuperating the system.

Small problem with that, as noted by Weather.com: The Corps of Engineers says it had absolutely nothing to do with any decisions PREPA made. A PREPA spokesperson also said a $2 million payment to Whitefish for getting subcontractors and equipment to Puerto Rico had been made under the auspices of the Army Corps and FEMA, which keep insisting they aren't involved with the contracts at all. And a spokesperson for APPA, Michael Hyland, told E&E news that while financial arrangements are left up to the utilities that participate in mutual aid arrangements, there hadn't been any mention of PREPA's financial state on any of the calls to Ramos he'd participated in. And yes, like the rest of the territory's government, PREPA is bankrupt and deeply in debt, though that doesn't help explain why the utility would choose a tiny, inexperienced company to give lots of money it doesn't have, either.

Since we're talking about Whitefish, we should also mention a possible red herring -- or maybe it's more than that? Y'see, Whitefish Energy is based in Interior Secretary Ryan Zinke's hometown, Whitefish, Montana. WaPo got the relevant people and their offices on the record about that surely coincidental detail:

[Whitefish] chief executive, Andy Techmanski, and Zinke acknowledge knowing one another — but only, Zinke’s office said in an email, because Whitefish is a small town where “everybody knows everybody.” One of Zinke’s sons “joined a friend who worked a summer job” at one of Techmanski’s construction sites, the email said. [...]

Zinke’s office said he had no role in Whitefish securing the contract for work in Puerto Rico. Techmanski also said Zinke was not involved.

E&E News had already reported that Whitefish appears to have been selected at least in part because PREPA already had the company's phone number on hand. Whitefish was one of the two mainland companies that had submitted bids to do smaller jobs on the island following Hurricane Irma, and with all communications down after the hurricane, a PREPA procurement employee called Whitefish on a satellite phone because the number was on file. Seriously.

WaPo got a sort of confirmation of that, too: No formal bidding process, and the arrangement was made with a phone call. As a result, Whitefish maybe stands to make a whole lot of money, even if it takes a while to get the power restored to the island. Maybe.

Because now Congress is looking into how the contract was awarded, and FEMA and the Corps of Engineers are beginning to issue contracts to other companies as well. Frankly, it's all a big confusing mess, and we can hardly wait for Rachel Maddow to eventually sort it out for us.

Yr Wonkette is supported by reader donations. Please click right here to help us keep our lights on!