Putin Signs Law Allowing Russians To Beat Their Wives Once A Year, Because Traditional Values 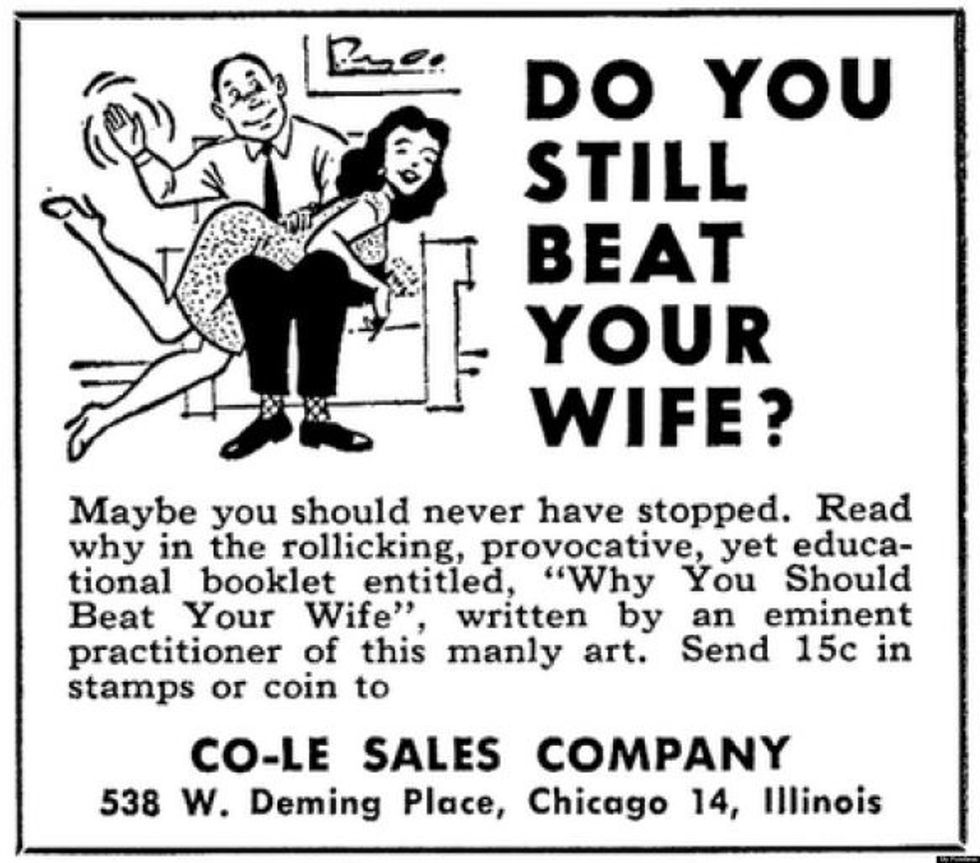 In Russia, according to their own government statistics, approximately 36,000 women are beaten by their husbands every day -- and Vladmir Putin and the Russian Parliament think that number could be a little higher if they try real hard! Thus, on Tuesday, Putin signed a bill that will decriminalize domestic violence so long as it only happens every once in a while. The bill already passed the Russian Parliament with vehement support -- 380-3.

Dubbed a "slapping law," the bill will decriminalize domestic violence incidents, provided they don't occur more than once in a 12-month period and don't result in serious injury.

In cases of repeated assaults, a defendant faces a fine of up to 40,000 rubles ($676), compulsory community service for up to six months, or being held under arrest for up to three months.

The fact that Putin signed this is hardly surprising. Back when the bill was first being discussed, he noted that "We should not go overboard with it (punishment for battery). It's not good, it harms families." Also, you know, he's terrible.

One of the sponsors of the bill is conservative senator Yelena Mizulina, also known for writing up that charming little ban on "gay propaganda." It's seen, largely, as part of a return to "traditional family values" based on the teachings of the Russian Orthodox Church and the "Domostroi" (domestic order) -- a 16th century book prescribing household rules, that was at least partially written by an advisor to Ivan the Terrible. So, you know -- who would not want a return to those times, huh?

(I, for one, have actually been re-reading a lot of my books about Imperial Russia because it is making me feel slightly better about our current situation. Because hey! This may be ridiculous, but you know what was also ridiculous? Three False Dmitris who kept getting assassinated. And also Alexander I who maybe faked his own death to go become a monk!)

The Domostroi includes many nuggets of wisdom, like "A wife which is good, laborious, and silent is a crown to her husband," "If he beats you it means he loves you,” and "Don't pity a youngling while beating him: if you punish him with a rod, he will not die, but become healthier." The book also describes corporal punishment as a blessing that can help you avoid "death of the soul."

In other words, it is super fucked up! But also it's traditional, so let's go back to that, huh?

Now, the way this whole thing is worded, you might think that Russia had a real big problem with domestic violence being over-reported. In fact, one member of Russian Parliament who voted for the bill told CNN that:

"Sometimes in this conflict they use, I don't know, a frying pan, uncooked spaghetti, and so on.

"Frankly speaking what we call home violence is not home violence -- it's sort of a new picture of family relations created by liberal media."

AH! So it is meant to prevent ladies from sending their nice husbands to jail just for tossing some uncooked spaghetti at them! Or hitting them with a frying pan, which as we all know is very gentle. Only the liberal media would oppose something like that, amirite?

But Russia actually has a much bigger problem with police not taking victims of domestic violence seriously. In fact, the AP reports just this past November, a woman called police to report that her husband was attacking her and was told that they could not do anything until he killed her. He did.

Given the way our own government is going these days, and Trump's love and admiration for Putin, we'll probably end up with a similar law ourselves sometimes soon. Hey, Arkansas is already trying to make it legal for your husband to sue you if you have an abortion without his permission, even if he raped you!

After all, it wasn't actually that long ago, relatively speaking, that domestic violence was considered relatively normal here as well.

Except instead of the Domostroi, our leaders will instead cite The Crystals 1962 hit "He Hit Me And It Felt Like A Kiss" (without understanding that it was actually supposed to be Carole King's critique of Little Eva's response to having been beaten by her boyfriend). Hey, not everybody gets "irony." Tell us about it!