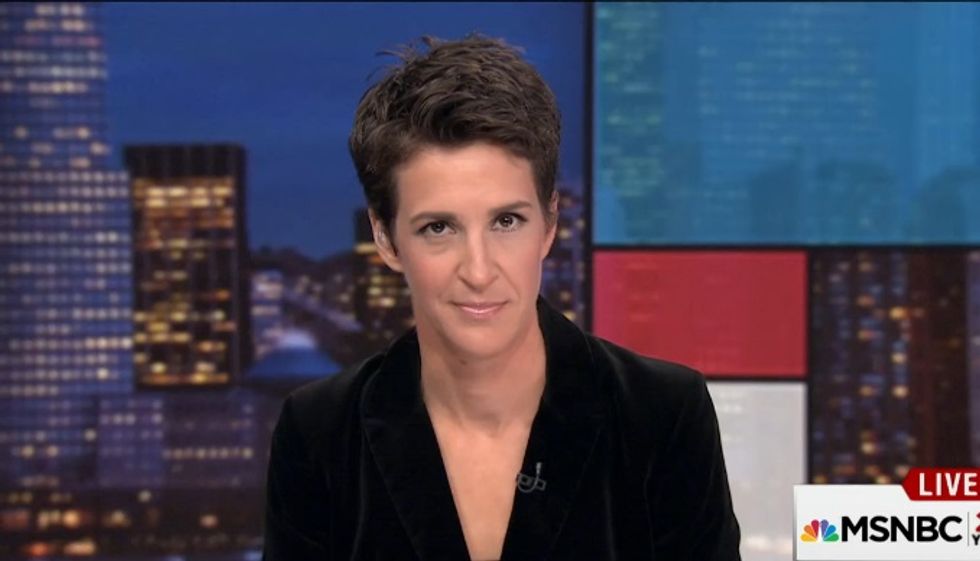 Rachel Maddow has a NEWS.

Oh hello, Rachel Maddow has some news for us, wonder what she is going to talk about! Just kidding, we know what she talked about and it is Trump's 2005 1040 form, or at least the first two pages. Here is the video!

Then Maddow tweeted that what she has is something from Trump's 2005 1040 form. She says this was handed to a reporter (David Cay Johnston), and she does not know why. Also, that could be important to the story!

9:05: Whatever Maddow is about to say, the White House is taking it seriously, by which we mean chasing its own dick around the Oval Office. Yeah yeah yeah, we know they ALWAYS do that, but this is different.

9:08: Rachel Maddow, whom we love, is professor-ing us right now. She is mentioning how Commerce Secretary Wilbur Ross is weirdly tied up in some of Trump's weirdo real estate deals with Russians. Read more about it here, in this nice post we wrote about how "Obama people" hid all kinds of sexxxy intelligence news for people to find, on their way out of the White House.

9:12: Here is some more background on the screwy real estate deal Maddow is talking about, where a Russian oligarch paid Trump an ungodly sum of money for a mansion in Florida. It's interesting!

9:14: God, Rachel we love you. SAY THE WORDS ABOUT WHAT THE THING IS. Or as Jonathan Chait put it:

9:16: We know Trump has gotten many moneys from creepy entanglements with mobster creeps around the world. Here is a thing she just mentioned, about the Azerbaijanis! And here is a thing about Trump's weird connections to Alfa Bank in Russia, and also Deutsche Bank!

9:19: TAXES! Rachel says it's good! Rachel went to commercial! Ugh, everybody go smoke a cigarette, no excitement just yet :(

9:22: OK, so here is a Daily Beast story about it. He made like $150 million that year and paid $38 million in taxes that year, mostly in the form of the Alternative Minimum Tax. By the way, 2005 is the year Trump married Melania, just FYI. Maddow says this tax return just showed up in David Cay Johnston's mailbox, and that basically the White House has verified the return.

Wonder if Melania mailed this stuff to Johnston, just curious, no reason why.

9:26: Rachel Maddow confirmed that she is not #FakeNews, and pinched herself to prove it. Now everybody will pinch Rachel Maddow when they meet her, and she will get SUPER ANNOYED by that.

9:28: David Cay Johnston says we should be open to the possibility that Trump himself leaked this to him. COULD BE MAYBE!

Now will he leak his own Russian Pee Hooker video, not that such a thing could possibly even exist?

We really could see Trump leaking his own tax returns and then using that as a reason to yell at the media, but also to try to control the story. Or it could be Melania. We believe those are the "clients" we are dealing with right now!

Anyway, commercial again, what are you Wankets making for dinner tonight?

9:37: A desperate nation cries out for the pee video:

9:40: So, we are on Team This Actually Is Important, and also Team This Is Just The Beginning, but a timely reminder from Hillary Clinton's press dude:

Don't get distracted! We will figure out the taxes thing in due time, oh yes we will.

9:42: All the Wonkette seekrit chatcave agrees that the laugh David Cay Johnston did a few minutes ago was weird and probably frightened all our dogs.

9:45: Best former congressional tweeter of all time John Dingell, everyone!

For real, while you are all paying attention, LET'S DO TALK about Trump and Paul Ryan's "healthcare" plans, and also that weird story about how Trump did an executive order to "reorganize" the Executive Branch, which to many kinda looks like they mean "destroy" the Executive Branch. Big stuff!

9:52: We sure are glad Dead Breitbart is taking all this in stride:

9:53: David Cay Johnston's website is crashed and Rachel Maddow's website is crashed, but that's OK, you only need one website, and it is called Wonkette. Hey, if you like how we jumped into action and liveblogged Rachel with you, you should give us a lil' donation, as we are ENTIRELY reader-supported! Or a big donation! Or buy some snazzy liberal merchandise!

10:00: OK, we are wrapping up! We will see what this leads to, now won't we? But maybe Trump leaked these two pages to distract us from something else! But Rachel Maddow is smiling like she just did something really big, so maybe that means a hell of a lot more is about to come out.