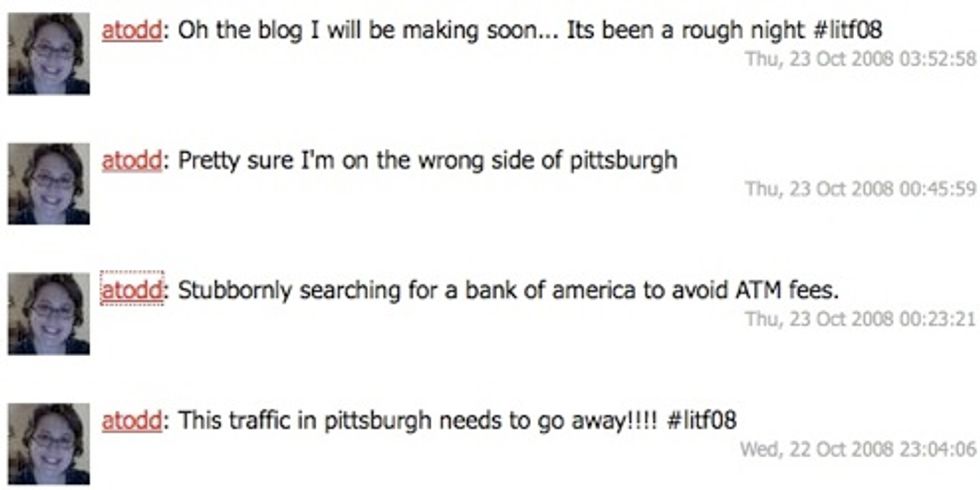 Is this even possible, the lameness of this? Here we have a screenshot of this gal's Twitter feed, on a college Republicans' site called "Life In The Field," presumably about GOP volunteer kids. All 50 of them! Oh and then one of her Twitter buddies says, "i hope @atodd gets caught in her lie."

But other than that, nobody on "Life In The Field" is talking about this Explosive Story! What is up, with that?

Anyway, from the rest of alleged victim Ashley Todd's Twitter page, we learn she got a speeding ticket, and oh boy she is sure sore about those ACORN people trying to register minorities to vote, and then she is just cold twitterin' while driving around, lost, on the "wrong side of Pittsburgh" (where blacks are), and of course she doesn't use her phone to call Bank of America and ask where there's a branch, because why do that? And then oh noes she gets mugged out of view of the bank security cameras, and one of Barack Obama's brothers jumps out of the bushes and, uh, sort of gently indents a backwards "B" on the side of her face, the way you might do such a thing to yourself, using a mirror, if you were a tragic loser trying to get attention -- you know, like that black Tawana Bradley!!!

Is any of this real? Because it smells like the dumbest stunt in two years of incredibly dumb stunts.

UPDATE: The Smoking Gun got screenshots of her main Twitter page before she locked access. Extra intrigue: She first claims she talked her way out of the traffic ticket, then later claims she is seeing a judge (the next day?) because she got a ticket. Maybe two tickets? Who knows, man, who knows.