Racist Assholes Want To Rally In Portland Now, And Wonkette (SIGH) Is With Them, Ugh 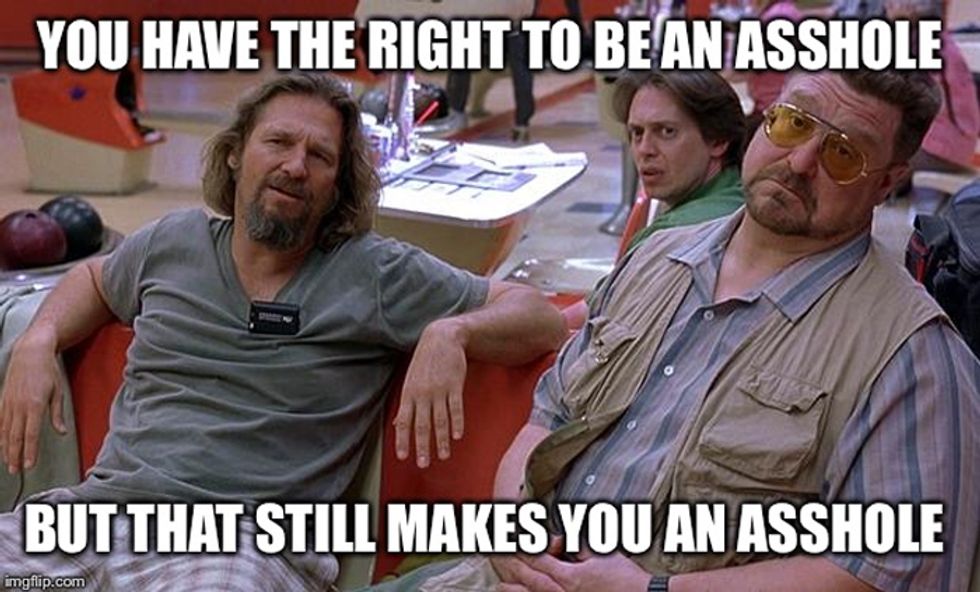 Say what you will about the tenets of national socialism, they're still assholes.

After two people were killed by a white supremacist terrorist after they tried to stop him from haranguing two young women on a light rail train, Portland, Oregon, is not the happy city of hippy-dippy crafters putting birds on stuff that we never really thought it was. It's a city in mourning for two heroes who had their throats slashed for trying to intervene in a racist harangue. So maybe right now is not the best time to add to the general political ferment by scheduling a "Trump Free Speech Rally" for next Sunday, or to honor the killer's hatred with a “March Against Sharia” on June 10. Which is why, of course, the organizers of those events are absolutely set on going ahead with them, because it's very important to be as provocative as possible right now. Portland Mayor Ted Wheeler has asked the federal government to revoke the permit, already issued, for the first event, and to deny a permit for the second, at least while the city is dealing with a fresh hate-motivated murder. The location for the rallies, Shrunk Plaza downtown, is a federal site, and the city government has already refused to issue permits for the events.

Our community remains in shock and mourning. But we are also tremendously grateful to our heroes and their families for their selflessness and heroism. They will serve to inspire us to be the loving, courageous people we are meant to be [...]

Our City is in mourning, our community’s anger is real, and the timing and subject of these events can only exacerbate an already difficult situation.

Wheeler also appealed to the event organizers to cancel them, as if that were likely, and urged them "to ask their supporters to stay away from Portland. There is never a place for bigotry or hatred in our community, and especially not now." Ah, but you see, the organizers have to dig in now, because if they don't, they'll be giving in to Liberal Fascism, so the only noble thing to do is to be as offensive as they can while also promising to remain peaceful. And of course the usual small but violent groups of asshole anarchists, Black Bloc rowdies, and assorted anti-fascist ("antifa") street fighters are spoiling for a fight and looking forward to the chance to smash some Starbucks windows, to help bring about the Revolution. (Not all antifascist folks are violent. The ones who are, we don't like.)

And so Portland finds itself with a classic First Amendment dilemma: To what degree can a reasonable fear of violence justify shutting down speech in advance? The courts have always been pretty clear on that one: Offensive speech -- especially offensive, even hateful speech -- is protected, and the government can't shut it down -- but it can make sure police are on hand to control any outbreaks of violence. The ACLU of Oregon responded to Wheeler's call for the revocation of the permits with a good old-fashioned Let The Nazis March In Skokie series of tweets:

The government cannot revoke or deny a permit based on the viewpoint of the demonstrators. Period.

It may be tempting to shut down speech we disagree with, but once we allow the government to decide what we can say, see, or hear, or who we can gather with[,] history shows us that the most marginalized will be disproportionately censored and punished for unpopular speech. We are all free to reject and protest ideas we don't agree with. That is a core, fundamental freedom of the United States. If we allow the government to shut down speech for some, we all will pay the price down the line.

Yr Dok Zoom is an old school ACLU card-carrier, so we find that pretty persuasive, along with the sweet old-fashioned notion that the best way to combat offensive speech is with more speech. And when it comes to Nazis, with social shunning, boycotts, and a recognition that someone having the right to free speech in no way obligates the rest of us to hand them a microphone. But if protest is allowed in a park, then it's allowed even for people with abhorrent views, because First Amendment. Should it be allowed at any time, especially a week after an evil loser has murdered people? That one, we're persuadable on: It's close enough to yelling "theater!" in a crowded fire that we can see the case for shutting it down, temporarily, as long as there's a guarantee the marches will be allowed later. We won't pretend to know for certain, but the accused murderer in Portland being photographed Heiling Hitler while wrapped in a flag at the last event organized by the "Trump Free Speech People" certainly doesn't make them seem like benign free speech advocates:

The organizer of the “Trump Free Speech Rally,” Joey Gibson, sought to distance himself and his group, Patriot Prayer, from Christian, especially as reports surfaced that he appeared at the group’s other events. In a video posted to Facebook on Sunday, Gibson condemned Christian and said antifa protesters were trying to incite chaos at the upcoming rally by exploiting the attacks on the train.

Gibson urged his supporters to remain calm. “You throw one punch, you’re going to jail,” he said.

See? All nice and nonviolent -- but one of the featured speakers is Kyle Chapman, the violent convicted felon the "alt-right" is calling "Based Stick Man" because he hit some demonstrators at Berkeley with a stick. He'll be there to nonviolently advocate free speech, and maybe he'll mention busting heads, as an aside. But again, the courts are very clear on this -- the possibility of incitement to violence is insufficient to allow government to quash a rally, although actual incitement could be grounds for arrest.

But that's the thing with free speech -- if you ban the neo-Nazis, then you've set a precedent to ban protests after cops kill an unarmed black kid. Democracy has room for assholes -- and as long as the only thing the assholes are using is words, then they have the right to their assholishness. And a heavy police presence, to keep them and antifa troublemakers well apart.

Yr Wonkette is supported by reader donations. Please click the "Donate" clicky if you like this article, and try not to burn down Dok Zoom's house with him inside it if you don't.