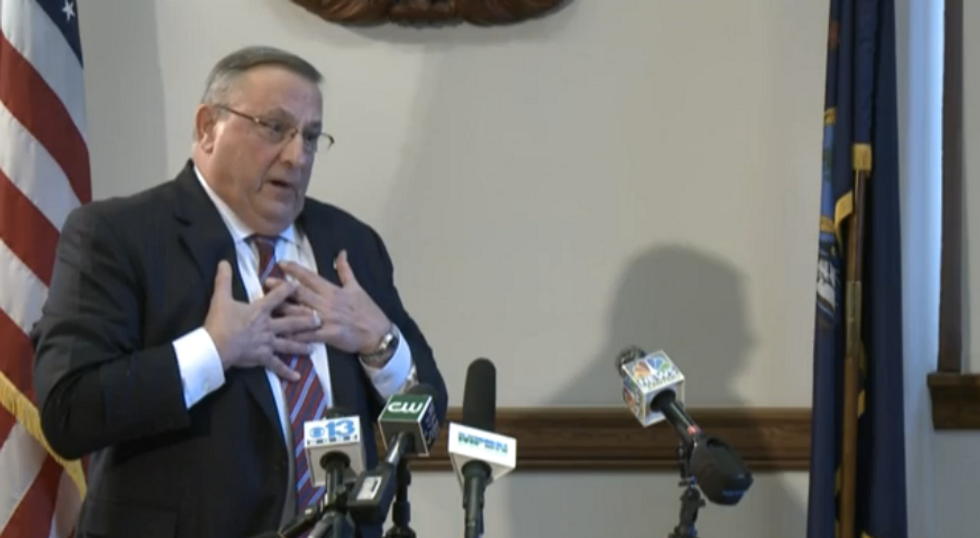 He didn't mean to say exactly what he meant to say

[contextly_sidebar id="TFBG5fNQaNRSignaaedg1oWlYe955GCd"]OK, everybody, shut it down. There's no reason to poutrage over Maine Gov. Paul LePage's claim on Thursday that "guys by the name D-Money, Smoothie, Shifty" are invading sweet lil' old Maine, from the Big City of Connecticut, to get everyone hooked on the heroin and also knock up all the white women too. During a Friday press conference, he explained he didn't mean itthat way -- you know, the grossly blatantly super fuckin' racist way:

"I made one slip-up," LePage conceded. "I may have made many slip-ups. I was going impromptu in my brain, didn't catch up to my mouth. Instead of saying, 'Maine women,' I said, 'White women.' I'm not going to apologize to the Maine women for that because if you go to Maine you will see we are essentially 95 percent white."

Later he clarified, "If I slipped up and used the wrong word, then I apologize to all the Maine women." [...]

LePage denied using names like "Smoothie" for their racial connotation.

So he's not sorry, but maybe a little sorry, if he used the wrong words to describe white ladies, but he's definitely not sorry about the other stupid racist crap he said. He meant Kale Smoothie, obviously, that pale-faced Birkenstocked hippie from Park Slope, who drives his Prius up to Maine on the weekends to sell his artisanal drugs and have sex with the non-race-specific women of Maine. Yeah, we're sure that's what he meant, uh huh.

[contextly_sidebar id="LTsF1QkTzhCS7IRJnEYvlzuIH3aqJouS"]As always, the problem isn't that the governor is a barely literate shitheel racist moron. (Except that he is, and yeah, that's a real problem the people of Maine might want to do something about.) The problem is that the media showed a video of him saying these things and then allowed people to come to their own conclusions about the words vomiting out of the governor's face:

"You're in the back pocket of Maine bloggers," he continued, referencing the site that first highlighted his remarks. That blog, called Get Right Maine, is run by Lance Dutson, a Republican operative.

During his presser, the governor insisted his point is that The Drugs is a real problem in Maine, and he knows that personally because he has heard of two people at least who have had drug problems. And there are probably others out there, and he'd like to read about that -- instead of how he is a stupid racist fuckhole -- in the newspapers he doesn't read because the media is so biased against him, so what's the point?

"That's what keeps me awake about," he said (yes, verbatim), adding that he talks about it so much with his wife, "she's gone tone deaf on me."

Assuming we understand what LePage meant about his "tone deaf" wife, we can't say we blame her.