Racist Maine Gov. Paul LePage Decides It's The Blacks Dealing Drugs After All 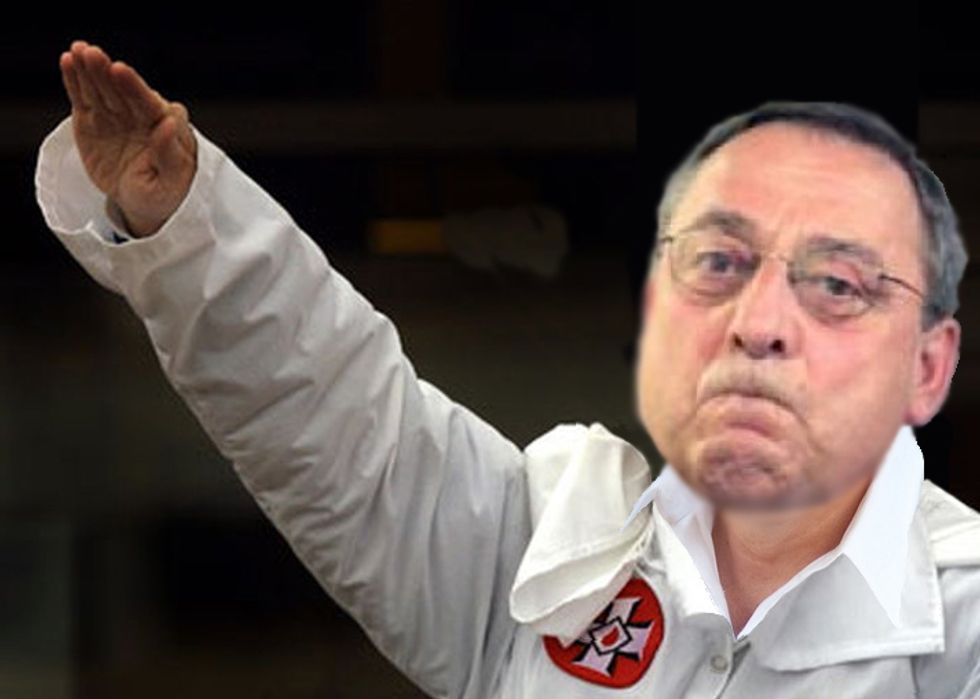 We're only doing this to get your attention

[contextly_sidebar id="djo0xUWj61iI0Wed2FZGEBHCkI8CTUEf"]How incompetent is Paul LePage, the racist Hefty bag of bile and moose leavings who's somehow won two terms as Maine's governor? Apart from being so blessedly stupid that he mistakenly allowed a bunch of progressive legislation to become laws when he thought he was vetoing them (thanks, Shit Fer Brains!), he's not even any good at lying about his own racism, which you'd think is the first thing they teach at Republican Governors Orientation Camp.

As you'll recall, in early January LePage made an important observation about his state's epidemic of opioid addiction, blaming the heavy drug use of Maine residents on "guys by the name D-Money, Smoothie, Shifty,” all from out of state, of course, who in addition to selling all the drugs, "half the time they impregnate a young white girl before they leave,” a state of affairs LePage considered "a real sad thing because then we have another issue that we’ve gotta deal with down the road."

[contextly_sidebar id="n78hC9iA0b4wK0wzTsVsAw32j25ECKzb"]LePage then held an insane press conference in which he "clarified" that all those drug dealers weren't necessarily nonwhite, because pretty much all the gals in Maine are white, and so anyone getting knocked up would likely be a white girl is all, so don't call him a racist, you liberal monsters, especially you racists in the press. There are no racist implications to made-up drug-dealer names like "D-Money, Smoothie, Shifty," he said, and on that one we can almost give him credit, since the second two sound like they came from bad 1920s gang movies. (You want a good small-time criminal nickname? Kid Zoom's late step-grandfather knew a guy in Brooklyn called Sticky Fingers Goldfarb).

[contextly_sidebar id="7q3YAXUNPN9Qk0pDas35yYhcIvVFEaI0"]And there the transparent lie should have been left, just one more idiot thing on the heap of idiot things said by Paul LePage, like his suggestion that all these drug dealers of indeterminate racial background should face the guillotine, or his elegant case against wind power, since he was pretty sure the University of Maine's experimental wind turbine has a "little electric motor" hidden inside to make it turn on calm days.

But this being Paul LePage, there is simply no political scab that he can't stop picking at, so Tuesday he returned to the matter of where Maine's drugs are coming from, and this time he decided it really is The Blacks after all. In a radio interview, he explained that he had to be racist, but only to get the attention of Maine legislators who are too busy being his enemies to do anything about drugs:

"I had to go scream at the top of my lungs about black dealers coming in and doing the things that they’re doing to our state," he said ... "I had to scream about guillotines and those types of things before they were embarrassed into giving us a handful of DEA agents. That is what it takes with this 127th [legislature]. It takes outrageous comments and outrageous actions to get them off the dime."

We weren't actually aware that the DEA allots agents on the basis of screaming, but then, we also have a hard time recognizing real ghetto drug dealer names like Shifty and Grumpy and Sneezy when they're named right in front of us. But you see, it's still not racist for LePage to howl about the black drug dealers, because how else are you going to get the DEA to help -- with a rational proposal identifying key crime areas, backed up with statistics? Nah. You gotta scream about how the dusky-hued hordes are coming for Our White Girls. Paul LePage really hated to have to do that, but there's a real problem and it needs solving.

Ever the party poopers, the Portland Press-Herald notes the 127th legislature actually had introduced a bill to hire 10 new agents for Maine's Drug Enforcement Agency a month prior to his comment about dealers impregnating "white girls," although it is true that the bill actually passed after that speech. Similarly, the paper points out:

The Legislature passed the $3.7 million drug bill one week before LePage joked in an earlier WVOM interview that Maine should “bring the guillotine back” to use on convicted drug traffickers. While that statement was made in jest, LePage has said on several occasions that he would support executing drug traffickers despite Maine’s current prohibition on the death penalty.

It's almost as if he didn't actually need to say all this stuff. As for today's comments aimed at raising awareness of Paul LePage's Negro Problem, the Huffington Post helpfully adds that "for the record, there are also white drug dealers in Maine," although surely they are outliers:

As of yet, we have not had any reports of Maine legislators reacting to LePage's latest briefing on the drug menace by saying, "Lord have mercy, so it IS the blacks? This changes everything!" We'll do our best to keep you posted.