Racist Mall Lady Will Never Get To Go To The Mall EVER AGAIN! 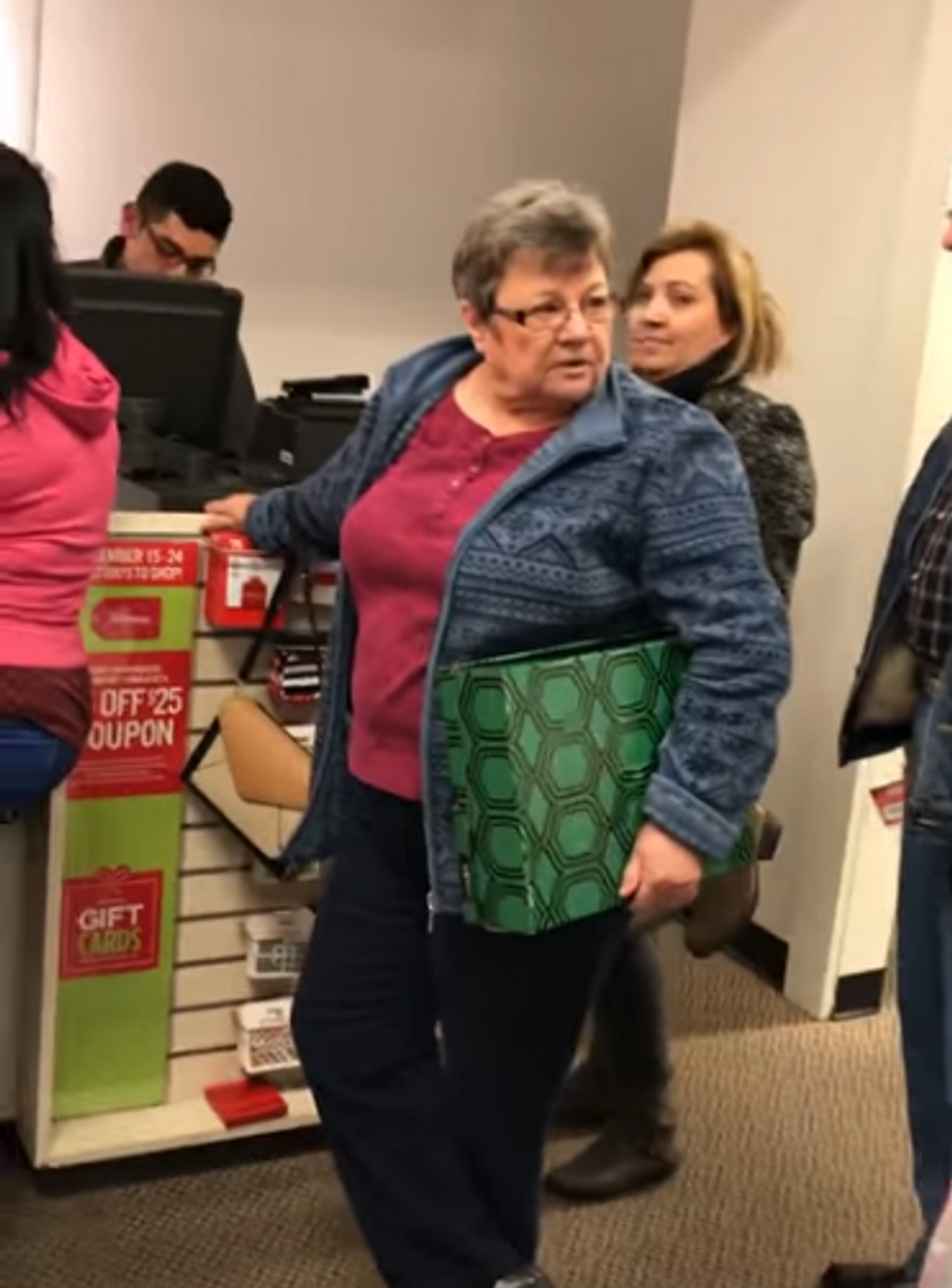 DO YOU KNOW THIS MEAN LADY? IS SHE YOUR GREASY RACIST REDNECK GRANNY?

HAHA, we have a quick update on that story we told you this morning, about the white racist lady who went to Jefferson Mall in Louisville, Kentucky, and got caught on candid camera at the JC Penney screaming racistly at two Hispanic ladies, telling them to "GO BACK TO WHEREVER THE FUCK YOU CAME FROM, LADY!" and whatnot.

The Jefferson Mall is going to BAN HER FOR LIFE, soon's they figure out who the hell she is. If it helps, Wonkette made a wild guess in our original post that her name is "Bess," but we're willing to consider the possibility that it's Alice or Carol Lou. SHE IS SUCH A CAROL LOU! Or a Peg.

If you can't embiggen that, the key thing is that the mall does NOT tolerate this kind of shit, and that they "will work to identify this woman, and once identified, she will be permanently banned from Jefferson Mall, per our Behavioral Code of Conduct." Also, the mayor of Louisville, Greg Fischer, has publicly apologized to the nice Hispanic ladies what got hate crimed with racism in the video, so that's nice, since, as reported by the Louisville Courier-Journal, a local Hispanic activist named T. Gonzales says "hearts are breaking" in their community over this.

So, hopefully the mall will figure out who that lady is, whether she's a greasy redneck racist grandma, or a history teacher who teaches that the Civil War was actually called the War Of Northern Aggression, or just A Idiot who does nothing but sit at home watching Fox News and stewin' about the Messicans. FOR THE RECORD, we should point out that we are 100% positively against doxxing, so we don't want to see her personal information appearing on the internet. We just want the mall to find her, so they can revoke her JC Penney rights.

Here, want to watch the video again and celebrate that this lady will never agin' get to slather her paws with butter while she eats an Auntie Anne's pretzel, will never henceforth be allowed to get her ears triple-pierced at Claire's boutique, and if she was thinking of getting her summer body back by becoming a mall walker, that pipe dream can fuck right off for this lady, because she ain't allowed? OK!

There's an Olive Garden in that mall too. SORRY ABOUT YOUR UNLIMITED BREADSTICKS AND BOTTOMLESS SALAD, LADY!