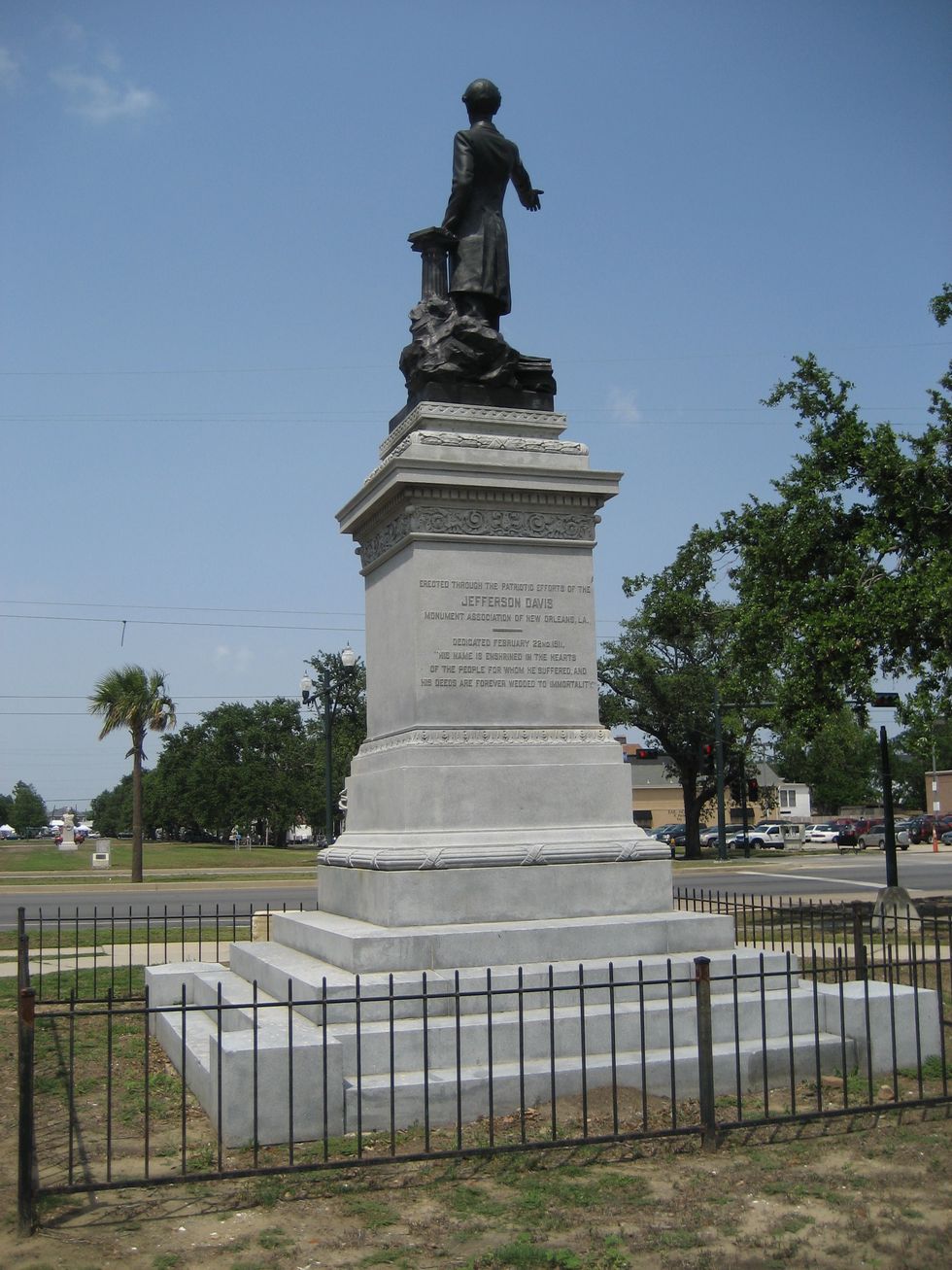 Hi, I'm Confederate President Jefferson Davis. I suck and I am dead. (via I, Infrogmation on Wikipedia)

[contextly_sidebar id="6RRQ9PHYfRVi5v2zoMJxo8oMo7phSjZy"]We reported last week that the New Orleans City Council had voted to grind the city's confederate monuments down to a fine dust and force pig turd racists to snort them for a Festivus miracle. OK maybe it didn't vote for ALL OF THAT, but you get the gist. Predictably, folks who really, really want to keep those slave-driving bronze farts around, for birds to poop on, are suing the city:

The plaintiffs–the Monumental Task Committee, the Louisiana Landmarks Society, the Foundation for Historical Louisiana and a chapter of the Sons of Confederate Veterans–also claim that removal of the monuments violates a Louisiana constitutional provision recognizing the right of the people to preserve, foster and promote their linguistic and cultural origins.

According to the Times-Picayune, [an] argument in the suit “reprises arguments in a lawsuit filed in the early 1990s and supported, among others, by avowed Ku Klux Klan member David Duke.”

The Sons Of Confederate Veterans counts its fair share of balls-out racists as members, but the Southern Poverty Law Center (SPLC) explains it has been mired in a bit of a civil war (how Alanis Morissette Ironic!) the past few years, "between racial extremists and those who want to keep the Southern heritage group a kind of history and genealogy club." In other words, some of its high-ranking members are in hate groups, whereas others are your Great Aunt Mabel, who sits on the landmarks committee and is kind of racist, but she means well.

[contextly_sidebar id="j6cuGUydBTGDhBfViUFYsQg1pPQC3tX3"]What caught our eye, though, is the presence of historical societies on that list of plaintiffs, right next to Uncle Bigot Farts. It made us curious whether there might be another side to this argument that hasn't been heard much in this battle between confederate flag-humping bigots and others who, for obvious reasons, think men like Robert E. Lee and Jefferson Davis (in New Orleans) and Nathan Bedford Forrest (in Memphis) don't deserve to be honored with monuments.

So we checked the website for the Louisiana Landmarks Society, to see if it had made any statements regarding the monuments. Wouldn't ya know it, it had:

The fact that statues or monuments put up 100 or more years ago may still remind us of persons and events now viewed differently from a broader and contemporary historic perspective does not rob them of their legitimacy as historic witnesses. Monuments serve as historic "mileposts" which mark the evolution of a city's culture through the years and how our ancestors, rightly or wrongly, experienced their set of values at another time. Monuments continue to hold value today through their ability to remind, explain, and teach.

Other places with long histories are full of artifacts from earlier eras with viewpoints that may be seen today as lacking an appropriate level of historic balance and objectivity. Richmond, Virginia, with its Monument Avenue; the Japanese-American relocation camps at the Manzanar National Historic Site; and the Little Bighorn Battlefield monument are ready examples of how, rather than removal, new context can be given to old monuments, by lending balance or giving a fuller treatment to heretofore one-sided historic presentations.

The group includes statements from professors of African-American, Caribbean and Civil War history from Tulane, the University Of New Orleans and Loyola, all in support of preserving the monuments and adding necessary context, so that instead of trying to erase history, it can be used as a tool for growth.

Wonkette is agnostic about which approach is better -- burn it all down, or preserve and add to it? For once, this is an issue where we can see both sides! There's obviously value to leaving grotesque history laid bare, because that often reminds society to say, "Never again." But we're also aware that we are a white person who doesn't feel the history represented by those monuments in the visceral way our black friends and neighbors do.

We would suggest to Louisiana Landmarks and the other historic preservationist societies on the list that, while they may share the same goal with the Sons Of Confederate Veterans, joining a lawsuit with that group is really bad PR, you guys.

Because all this suggests there IS a robust conversation to be had, if Racist Grandpa Dicksnot would STFU with his whining about "Heritage, not hate!" and let the grown-ups control the conversation.