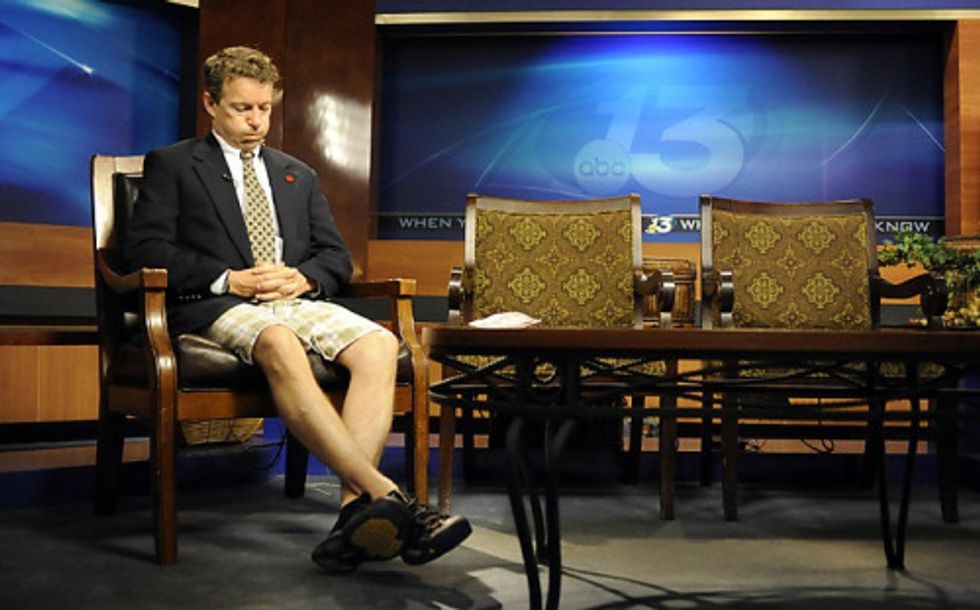 It must be his time of the month because Rand Paul and his luscious locks are quite hysterical about that mean brute Donald Trump and his sexisming!

[contextly_sidebar id="uOcpuURMWddoG8jzhFFKWaj4ENLeHBvS"]While good decent sensitive males like Paul have respect for strong assertive women, especially the girl reporter kind, that uncouth unchivalrous unfeminist Trump does not! And that, says Rand Alan Alda Paul, is why Trump is afraid to call Megyn Kelly a bleeding face-vag bottle blonde bimbo whore in person at the Fox News debate on Thursday:

“If you watch him do interviews with women, he bullies them, he runs roughshod over them, and he doesn’t like a strong, assertive women,” added Paul. “I think that’s more of what this is about. The things he said about her are things I can’t repeat on radio or in front of people. So no, I think he is taking it to a level of the gutter and we will see what the American public thinks of it.”

[contextly_sidebar id="NURKzFW5qrofCopdhzyZZXyAYOOFxGLO"]Rand Paul will not repeat the kinds of misogynist language Trump has used, because of how Rand Paul is A Lady. You'd never see the good "doctor" saying Hillary Clinton is far too Old Hag to be president, for example. Or dredging up NSFW distasteful subjects from decades past about where Bill Clinton extramaritally stuck his junk, which is definitely not (wink wink wink yes it is) "Hillary's fault." Certainly our greatest and most enlightened A Ally would never deny the existence of a war on women or say that Democrats started it.

That's the kind of absurd and offensive and How Dare You Sir! chauvinism one would expect from that pig, Donald Trump, and Rand Paul isn't having any of that.

[contextly_sidebar id="pXvMMBKJfpkAvQjv0QDQFJJRwCF2aHrC"]"I just don't see anything about him that makes him a conservative," Paul added. Which is an odd observation to make after clutching his pearls about Trump's unacceptable treatment of women, because last time we checked, bullying and disrespecting women and telling them they don't know what's best for their own bodies the way that men do was one of the main principles of conservatism. Hmm, silly us, guess we got that wrong.