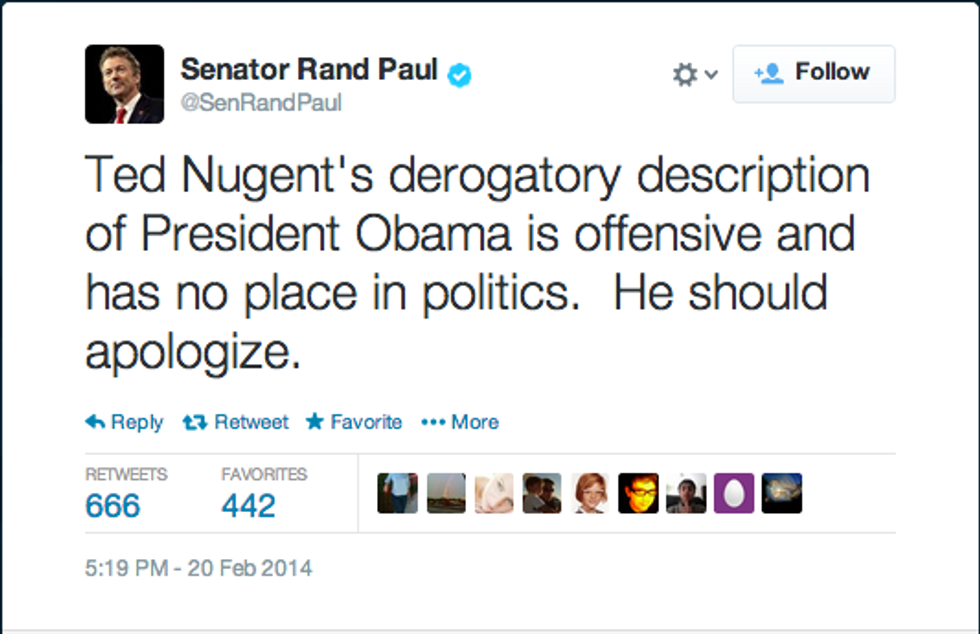 But now the media isn't just asking Greg Abbott about his embrace of the Nuge. They're asking errebody. They are asking Rick Perry, and Ted Cruz, and Newt Gingrich, whether they agree with Ted Nugent that Barack Obama is a "subhuman mongrel." And then an EVEN WEIRDER THING HAPPENED! Rick Perry and Ted Cruz said no, they do not agree! (Ted Cruz was still a total dick about it, though, because "Ted Cruz."*) Newt Gingrich, as is his wont, blamed the media. But they didn't even have to ask Rand Paul whether he agreed, because he was already tweeting about it all by himself, about how "not cool, Ted Nugent," and this made all the wingnuts :( that Rand Paul was murdering Ted Nugent's frist amenmunt rights, by disagreeing with him.

First here is Rand Paul, not being racist even though he is Ron Paul's son and is also Rand Paul.

Now here is what the twitter monkeys have to say.

And here's some more.

And now we are tired of taking screenshots of dumb idiots. My, how does Twitchy do it??

We think we have learned a lesson today, and that is that Rand Paul is a lib RINO squish for saying Ted Nugent should apologize for calling the president of the United States a chimpanzee and also a subhuman mongrel, so Ted Cruz will be the Republican nominee because he made it pretty clear that he is still a racist dick.

*Here is what Ted Cruz said: after four paragraphs of "what is even the big?" he was all like, Romney-styley, "Not the language I would have used."

On CNN's New Day, political correspondent Dana Bash confronted Ted Cruz with a video recording of Nugent's January remarks. “That's Ted Nugent," Bash observed. “He's campaigning here with the leading Republican candidate to be your next governor. Is that appropriate, for them to campaign together?" Cruz, no lover of Nazis, replied “Look, I had not seen that video until you just played it.
“What do you think of it?" Bash probed.
“I think it is a little curious that — to be questioning political folks about rock stars," Cruz said, and added, with a self-effacing laugh, “I got to tell you, listen. I'm not cool enough to hang out with any rock stars. Jay-Z doesn't come over to my house. I don't hang out with Ted Nugent."
“Jay-Z doesn't call the president a subhuman mongrel," Bash replied, adding, “Is this an appropriate thing to say?"
Cruz then spontaneously thought up the same exact thing that Newt Gingrich said yesterday, replying “I would be willing to bet that the president's Hollywood friends have said some pretty extreme things."
“The reason I played that for you is this week in Texas, he was invited to campaign with the man who may be your next governor in your party," Bash pressed.
“Those sentiments there, of course I don't agree with them," Cruz replied, and added “You've never heard me say such a thing, nor would I."

Sorry we stoled that whole humongous blockquote Tommy Christopher, but we left the vid over at your place if anyone cares.