Rand Paul Must Be Craaaaazy With This Tax-Code-Slashing Ad! Every Page Must Go! 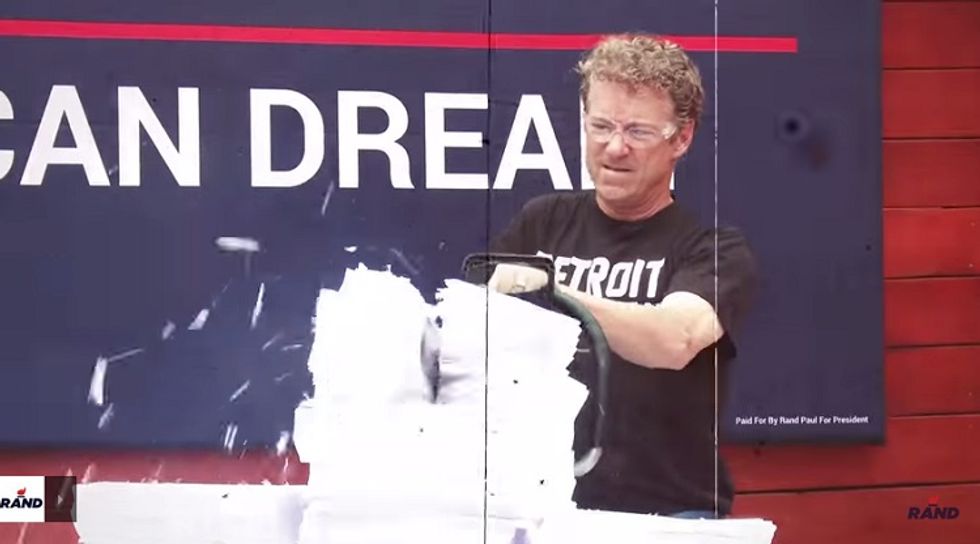 Sorry, Business Insider, we just can't let you get away with using the words "intense" and "Rand Paul" in the same sentence like this:

Sen. Rand Paul (R-Kentucky) released an intense new video on Tuesday where he appears to be literally destroying the US tax code.

We looked at the video, and no, it is something less than "intense." Maybe "intensely silly." So the big idea here is that Rand Paul is going completely Crazy Eddie on the tax code, as he announces in the first of two (?) videos: "Hey I'm Rand Paul and I'm trying to kill the tax code -- all 70,000 pages of it," to be replaced by a single-page tax code and a one-page tax return for everyone in Libertarian Fantasy America. Then a cheesy, less feedbacky imitation of Jimi Hendrix's Star Spangled Banner accompanies shots of Paul tossing piles of paper into a woodchipper, burning it, and slicing into it with a chainsaw. Apparently you can go somewhere to vote on this. Oh the intensity. Note also the fake film scratch lines on the video, so you know that Rand Paul is Alternative.

And then there's this, which is either the winner, or one of the three slightly longer clips of each option they made for whatever "winner" is chosen by the intensely excited participants in the Choose A Dumb Video Contest Can We Go Now? And here is what we like about this video: It demonstrates that chainsaws are not particularly good tools for cutting through loose stacks of paper:

If Rand Paul is gone from public view for any length of time, we're going to start a rumor that right after the edit at the end here, he plunged the chainsaw into his self-licensed kneecap, ouch. We really would not wish that on anyone.

Hope you're all feeling the RandSanity, people. This man is wild and edgy, and INTENSE. Especially if you'd like to stay up in the dorm all night getting high and discussing what the Founders surely would have thought about drones.

In any case, it's nice to see candidate videos branch out from shooting stacks of paper they will repeal. Perhaps they can watch a season or two of Mythbusters and find other, more pyrotechnically satisfying ways of destroying said props. Still, it could be worse. Candidates could burst into song.

God help us all.