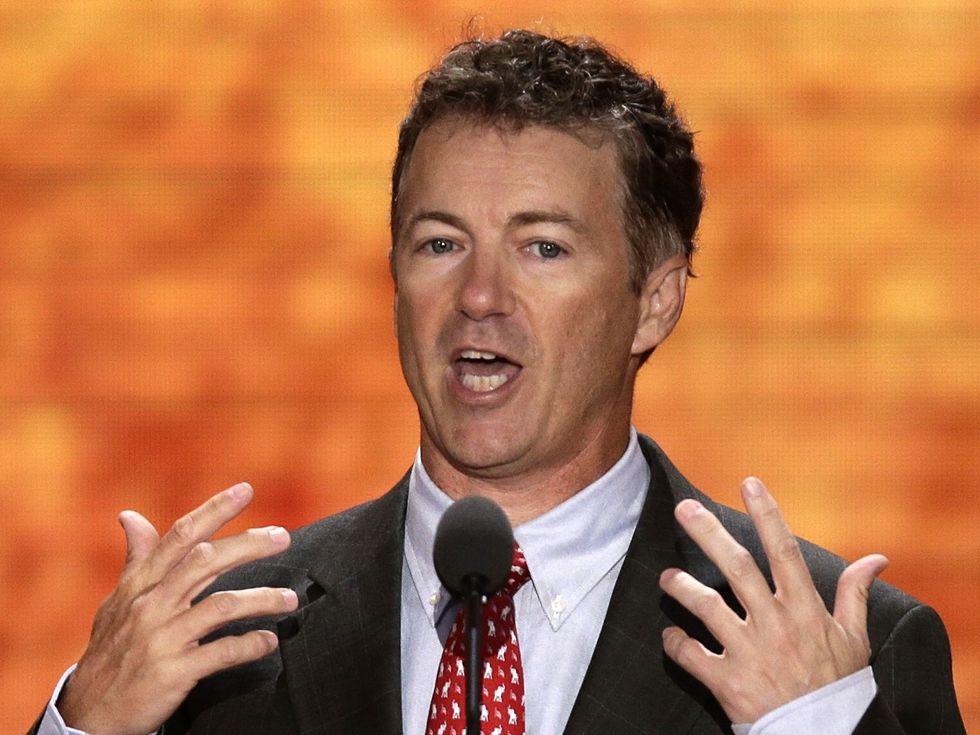 Rand Paul is still laboring under the delusion that he is running for president -- did you see the "dumbass" livestream of his campaign day? Didn't think so. Stumping at Drake University on Wednesday, he laid down some of that Serious Libertarian Free Market LOL business he's known for, in his answer to a question about whether it's OK for an employer to fire an otherwise qualified employee for EW GAY reasons. His answer? Let us parse it and point out the Badstupid things he says:

I think really the things you do in your house, you could just leave those in your house and they wouldn't have to be part of the workplace, to tell you the truth.

BADSTUPID! See, when Rand Paul goes to his house, he is married to a lady named Kelley, whom we are sure is very nice. We assume he fucks Kelley with his gross Aqua Buddha dick, and for that, Kelley, Wonkette is sorry. But the fact that we know who Kelley is means that his relationship with her -- including what they "do in their house" -- is part of his current workplace, which is (LOL) running for president, and occasionally finding time to be a shitty senator. Now, normal people understand that, just like for Rand and Kelley, the way they fuck each other in their houses is not the entirety of their relationships, and that Rand doesn't simply have her at his side on the campaign trail to keep her vag convenient, in case he needs to stick it in between interviews.

Kelley is his wife. And gay people have spouses, too, and should not be fired for having spouses, or not having spouses, or whatever. They're not "bringing it into the workplace" when they say "This is my husband Bruce" at the company Christmas party, Rand Paul, you imbecilic ass.

These are very difficult positions on what you decide will be employers' decisions and not. And it really isn't so much about that question, as it is about -- that it sets up a classification or a class of people that can now sue. You see what I mean? So what happens is, it sets up a whole industry for people who want to sue.

So if you happen to be gay, and you get fired, now you have a reason you get fired. But it's almost impossible sometimes -- people don't put up a sign that says, "I'm firing you because you're gay."It's something that's very much disputed. And so, I don't know that we need to keep adding to different classifications to say that the government needs to be involved in the hiring and firing.

The blacks and the ladies and the homosexicans and ALL THE OTHER ANNOYING PEOPLE who aren't white heterosexual males just want to be free from being fired for failing to have white heterosexual male penises. HOW DARE THEY SUE FOR THAT? But for real, though. Is there really a "whole industry," or is this another way for people like Rand to convince their malformed moron followers that all the minorities are out to get them? It is the second thing, thank you for playing our game!

We would also be remiss if we failed to point out that Rand Paul is not the biggest fan of the Civil Rights Act, or any of those pesky laws that what say white heterosexual males can and cannot do with their bidness. Hey, he says Kim Davis is just being a Good Ol' American when she refuses to issue gay marriage licenses. Maybe companies what hate the gays are doing the same!

It's no big deal, though, Rand says, because all the companies are really nice these days! Guess we don't need that whole suing industry after all:

I think society's rapidly changing, and that if you are gay, there are plenty of places that will hire you. I would say the vast majority of corporations already privately have manuals or work manuals that say that they don't discriminate in any way. I think that to be the fact. So I'm really not [indecipherable] the government more involved in the situation.

Now, the stupid fucking Libertarian slash social conservative is technically correct on one front. It is true that Corporate America has decided to tell bigots to fuck off for the most part, and at least among the Fortune 500, many companies are pretty damn decent toward their gays and their BLTs.

But, unfortunately, most Americans don't work at one of those corporations. SOME people work at Mom and Pop places, and Mom and Pop just happen to be unreconstructed toad-fucking, gay-hatin' morons. SOME people don't have the luxury to just go check out "plenty of places" that will hire them. SOME people spend their entire shift at work trying to run away from the Hobby Lobby Genital Inspection Brigade For Jesus, and nobody else is hiring. Maybe there ain't no jobs, ever since they went to China. Maybe Rand Paul should go fuck himself with one of the Rand Paul Freedom Paddles he's selling in his online store.

But whatever, says Rand. The free market will get those gaywads a job at Fantastic Sams or something, where they belong.

Hillary Clinton heard Rand's answer, and this is how she responded, with her Tweeter-Twatter: