Rand Paul Sure Loves This Dude Who Loves The Confederacy 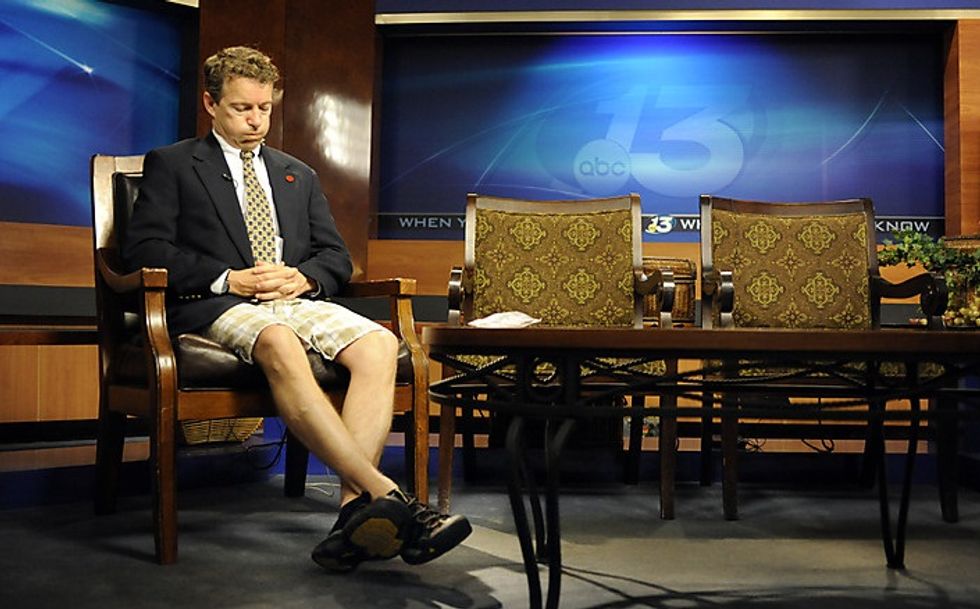 Like Jesus, we all have a cross to bear, and our particular cross is shaped like Sen. Rand Paul (R-Headdesk), a man so dumb that we are amazed he is allowed out of his house without wearing a helmet and a mouth guard. And when he joins forces with Judge Andrew Napolitano, the Confederate apologist prone to criticizing President Lincoln for forcing an end to slavery when the judge insists the “peculiar institution” would have eventually, someday, probably, likely died out on its own? The tsunami of dumb unleashed on the public could make Idiocracy look like the Oxford classroom scenes in Chariots of Fire.

Despite our fears, someone allowed Paul to write the foreword to Napolitano’s new book, Suicide Pact, an examination of the ever-expanding powers of the presidency and what this trend could mean for America. Which gave Senator Hairpiece a chance to expound on his own nonsensical views. Let us blockquote the passage that caught our attention, and then shake our heads so vigorously they tear themselves off our necks and hurtle across the room.

Rights are inherent and a natural extension of self; national security is a “commodity” that is purchased as a “result of a mixing of an individual’s labor and resources.” A good may be desired but isn’t a right.

I had this discussion with Sen. Bernie Sanders, the Socialist from Vermont. He seemed astonished when I maintained that health care cannot be a right because it would imply that someone has a right to the physician’s or nurse’s or hospital janitor’s labor.

This is what happens when a man’s brain becomes permanently stuck in the freshman political philosophy seminar he took at Baylor thirty-odd years ago. Must we point out the irony of writing “You can’t have a right to someone else’s labor” in the foreword of a book penned by an apologist for the Confederacy? Must we point out that national security is not a “good” in the sense that it is a commodity to be bought and sold in some sort of exchange, and therefore perhaps should not be placed in traditional economic models? Must we explain that health care is also not always a “good” in the economic sense, and that it is often provided by the labor of others whether they get paid or not, like when an uninsured patient shows up at an emergency room in the middle of a heart attack and gets treatment, the cost of which the hospital eventually eats or passes on to other patients who can pay?

Must we mention the irony of a man who represents a commonwealth seemingly unaware of the meaning of the word?

We like to think Bernie Sanders was astonished not by Paul’s argument, but by the fact that such a dunderheaded walking pustule could successfully tie his own shoes, let alone get elected to the Senate. Poor Bernie, his hair probably had not looked like that until the moment he had a conversation with Rand Paul.