Rand Paul Will Save America's Children With Some Stickers 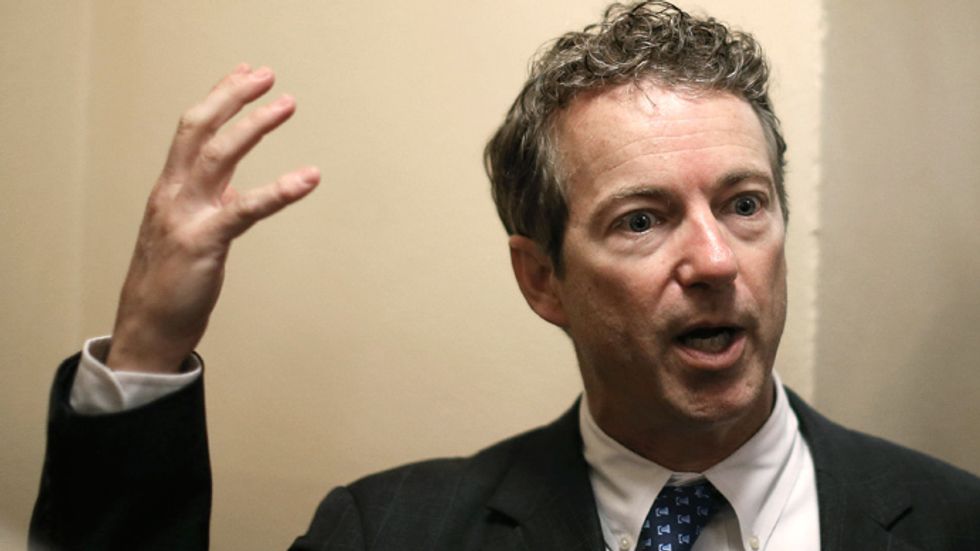 Like every other Republican with grand delusions of moving into the White House in 2017, Rand Paul has no idea what to do about America's routine mass shootings. But, as with his fellow Republicans, that has not stopped him from sharing the creaking sound the hamster wheel makes inside his head, following the most recent massacre, this time at a community college in Roseburg, Oregon.

On Tuesday, Paul agreed with the other "pro-life" Republicans running for president that sure, the murder of nine people is terrible, but it was President Obama's statement after the fact that turned the incident into a real tragedy:

It's an incredible tragedy, but it's even made worse by the president then politicizing it, jumping in, particularly since all of the things he's offering and wanting to do, I think most of them are already being done in Oregon. And by doing that, it takes our eye off the real problem, which is that most of these kids are mentally ill.

We've heard no reports of an increased body count since Obama's redundant plea for members of Congress -- like Kentucky Sen. Rand Paul, for example -- to act instead of simply offering prayers and helpless shrugs, but maybe some enterprising journalist ought to double-check that.

Or perhaps someone who'd had no desire to gun down a bunch of people before turning the gun on himself was then inspired to do so when Obama said, "We collectively are answerable to those families who lost their loved ones because of our inaction." You could see how that kind of inflammatory language could inspire a previously law-abiding well-adjusted person to go on a murderous shooting rampage. If you were, like Rand Paul, a fucking moron.

The problem clearly isn't a lack of gun restrictions, says Rand Paul, because more federal laws are never the answer to anything. This, from the same man who has voted for and even sponsored legislation to impose further restrictions on abortion, because that's different. That's about saving lives, you know.

No, the real issue, according to someone who, we are obligated to remind you, calls himself a doctor, is mental illness.

And there isn't an easy way to fix this, but we ought to at least talk about what the problem is, which is mental illness, and not necessarily gun registration or gun ownership. So yeah, I think it is sad that the president would do this. But I think the president doesn't understand any of this.

Now, President Obama may not have gone to medical school, but we don't mind guessing he has a greater understanding of the inadequacies of mental healthcare in this country, which is why expanding coverage is included in Obamacare. That's another one of those pesky invasive federal overreaches President Paul would eliminate.

So what is his comprehensive plan to address this nation's abysmal mental healthcare? Besides talking about it? Certainly he'll let us know the moment he comes up with something.

Oh, and he's got another idea. A real good one, guaranteed to address all concerns, including lack of treatment for mental illness:

I would have, and encourage, every school in America to put stickers on every window, going into the school saying "We are armed. Come in at your own peril. We have concealed carry for teachers who have permits. And we also have armed security. And you will be shot."

That's quite a lot to fit on a sticker! But maybe if we get a really big sticker? Or print the words in teeny tiny font? After all, studies indicate that mass shooters who survive their massacres, instead of killing themselves on the scene, always say the one thing that would have stopped them isn't lack of access to guns, or better access to mental healthcare, but a real big sticker telling them to stop it right now, mister. Who in their right mind would want to be shot, after all?

Like any good libertarian, Rand Paul also believes the 294 mass shootings this year alone are best explained by our "lack [of] a certain belief in right and wrong, a certain Christian foundation or religious foundation to our country." Also a valid point, since no one ever killed each other in the old-timey days of whenever it was Paul thinks we were a Christian nation. Lord knows no one who's ever read the Bible would believe it's OK to kill people, unless it's your brother, and he just really annoys you, or it's your own kid and God says you have to, or, oh gosh, any number of biblical examples.

Perhaps, if there is room, Rand Paul could add something about God to his stickers to prevent gun violence and treat mental illness. That ought to do the trick.