Reagan's Daughter All Like 'Hey Trump, Remember That Time My Dad Got Shot? 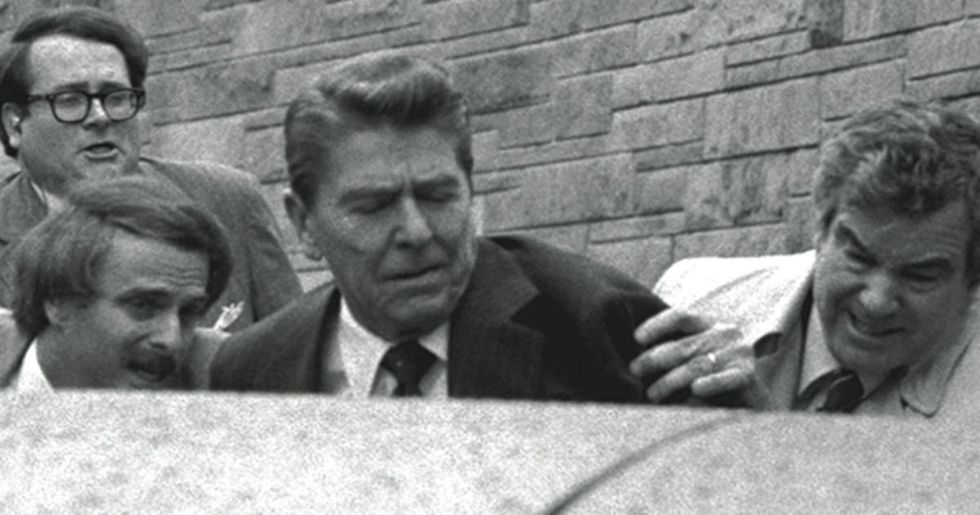 You know what was pretty awkward? When Donald Trump insinuated the other day that maybe some Second Amendment People would have some way of dealing with Hillary Clinton if she became president and nominated pro-gun control justices to the Supreme Court! NOW SURE, he and his friends are insisting this is just some kind of Amelia Bedelia-type situation and he totally didn't mean that even though he definitely did.

You know what is probably more awkward? If you happen to be a person whose dad was shot by a lunatic unable to discern fantasy from reality! Ronald Reagan's daughter Patti Davis (who is actually pretty cool) responded to Trump's comments on Facebook, noting that yeah, there are people who are gonna hear that and get ideas.

To Donald Trump: I am the daughter of a man who was shot by someone who got his inspiration from a movie, someone who believed if he killed the President the actress from that movie would notice him. Your glib and horrifying comment about "Second Amendment people" was heard around the world. It was heard by sane and decent people who shudder at your fondness for verbal violence. It was heard by your supporters, many of whom gleefully and angrily yell, "Lock her up!" at your rallies. It was heard by the person sitting alone in a room, locked in his own dark fantasies, who sees unbridled violence as a way to make his mark in the world, and is just looking for ideas. Yes, Mr. Trump, words matter. But then you know that, which makes this all even more horrifying.

Because we are all normal, sane humans, we can say "HEY, Reagan was the worst, he ruined the country and also one of Robyn's favorite movies, Dark Victory, starring Miss Bette Davis and a very sexified Humphrey Bogart, but attempting to assassinate him was a fucked up thing for John Hinckley to do! And not a thing we would encourage anyone else to do!"

[wonkbar][wonkbar]For the most part, people who commit these kinds of acts are not the kind of people who are gonna go "HMMM. Did he really mean that or was he just being glib? Maybe he was making a joke! Maybe he was talking about lobbies?" No, they're gonna hear that and think they're gonna be a hero to all if they go and assassinate Hillary Clinton. True story, Charles J. Guiteau genuinely thought that everyone was gonna cheer for him after he shot Garfield (on God's order's, natch). After he shot him, he loudly shouted "I am stalwart of the stalwarts! Arthur is president now!" as if he'd just done the nation a great favor. Add to that the fact that a lot of these "Second Amendment People" believe that the Second Amendment actually exists to give them the right to overthrow the government and go around assassinating people they disagree with, based primarily on a lot of fake "Founding Fathers" quotes found all over the internet, and you kind of have a recipe for disaster.