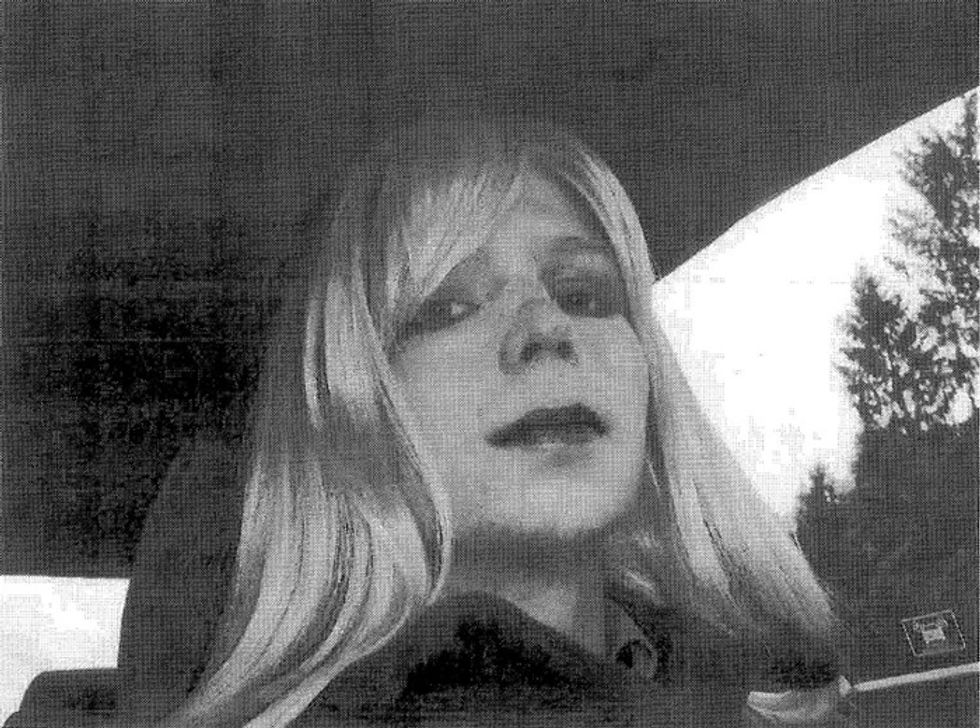 President Obama issued one last burst of commutations for federal prisoners Monday, including a reduction of Chelsea Manning's sentence from 35 years to time served, plus another four months so she can get ready for life after prison. The commutation brings Manning's sentence more in line with those given to others who have leaked classified information to the media, and is bound to reinforce all those conservatives' suspicions that Obama doesn't care one bit about national security, unlike the president-elect, who would have shot Manning and invited Vladimir Putin to come have pajama parties with him in the White House, as long as neither of them expects to braid the other's hair.

Obama's decision is likely to save Manning's life; she's attempted suicide twice within the past year, and at the time of the commutation was in solitary confinement at Fort Leavenworth, Kansas, in the men's military prison because while she's a trans woman, the Army decided she'd get the privilege of being imprisoned with the guys. Not that that could have contributed to her suicide attempts. Manning's 35-year sentence was the longest ever imposed for leaking information.

Obama also pardoned former Marine Gen. James E Cartwright, who had been convicted of lying to the FBI in an investigation of his leak of information to the press about computer attacks on Iran's nuclear program. So that's two commutations of leakers by the president who's been the most aggressive in prosecuting leakers. Makes you think, huh? Here's what it made the New York Times's Charlie Savage think:

The two acts of clemency were a remarkable final step for a president whose administration carried out an unprecedented criminal crackdown on leaks of government secrets. Depending on how they are counted, the Obama administration has prosecuted either nine or 10 such cases, more than were charged under all previous presidencies combined.

Good thing the Obama administration didn't set a chilling precedent for some future hypothetical president who's a raving paranoid, hates the press in general, and has already called for prosecution of anyone who released information about classified material on his relationship with Russia, huh? That would be one unfortunate precedent.

In commuting Manning's sentence, Obama also allowed the Pentagon to get out of fighting with a trans soldier who was a big headache for them, or in the Times's careful prose, the commutation

relieved the Defense Department of the difficult responsibility of Ms. Manning’s incarceration as she pushes for treatment for her gender dysphoria, including sex reassignment surgery, that the military has no experience providing.

Again that's also probably a lifesaver for Manning; Donald Trump has mocked the Defense Department's grudging acceptance of trans soldiers as "politically correct" and rumbled about reversing the recent Pentagon policy that would allow trans soldiers to serve and to provide medical treatment for soldiers who are transitioning. At least Chelsea Manning won't have to worry about a new president deciding he'd make an example of her.

And then there's Julian Assange; Wikileaks's Twitter account claimed last week that if Manning received clemency, Assange would accept extradition to the U.S.; the White House said that offer had played no role in the decision to commute Manning's sentence, and for that matter, it's not even clear whether Assange actually faces extradition (yet):

The justice department has never announced any indictment of Assange and it is not clear that any charges have been brought under seal. The department, in refusing to turn over investigative documents sought by Manning under the Freedom of Information Act, has acknowledged that the FBI is continuing to investigate the publication of national security information on WikiLeaks arising from Manning’s disclosures.

Donald Trump will go to work as president on Monday. If he feels like it.

You can probably bet they'd like to have a word with him about all that Russian hacking, though -- maybe if Assange does end up here, he can look forward to a quick pardon by President Trump -- whenever he actually starts working -- who may decide it's time to move on past all that ugliness.

Manning's leaks of huge amounts of classified material in 2009 was the first large-scale leak handled by Wikileaks before Julian Assange started turning publicly creepy, and included of course that horrifying “Collateral Murder” video, of a helicopter attack in Baghdad, including a second pass in which the attack helicopters blew the living hell out of people in a van trying to rescue survivors of the first attack (trigger warning for AWFUL):

Fine, Here Is Your Wonkpinion On The Bradley Manning Verdict

As we said in our highly ambivalent piece on Manning's 2013 conviction:

That sort of refueled our rage tanks toward the whole Iraq fuck-tussle and reminded us that even though there’s plenty to quibble about in the way that Wikileaks operated, or Julian Assange’s drama-queen tendencies, Bradley Manning’s leak of those helicopter gunship videos, all by itself, was a Pentagon Papers level of civil disobedience, and well worth going to prison for. (Manning was acquitted on one count of espionage for leaking video of a different airstrike, in Afghanistan, but not this one.)

Also, go read Charlie Savage's fine reporting on how Manning has been treated in prison, keep in mind she confessed and has served more time than most people who have leaked stuff, none of which had a higher classification level than "secret," and also that even the prosecution in her court martial did not claim that anyone died because of the leaks. We're good with Manning's commutation, and for godssakes it's time to let her live the rest of her life.