'Recused' Shitweasel Devin Nunes Will Obstruct Justice For Trump If It's The Last Thing He Does! 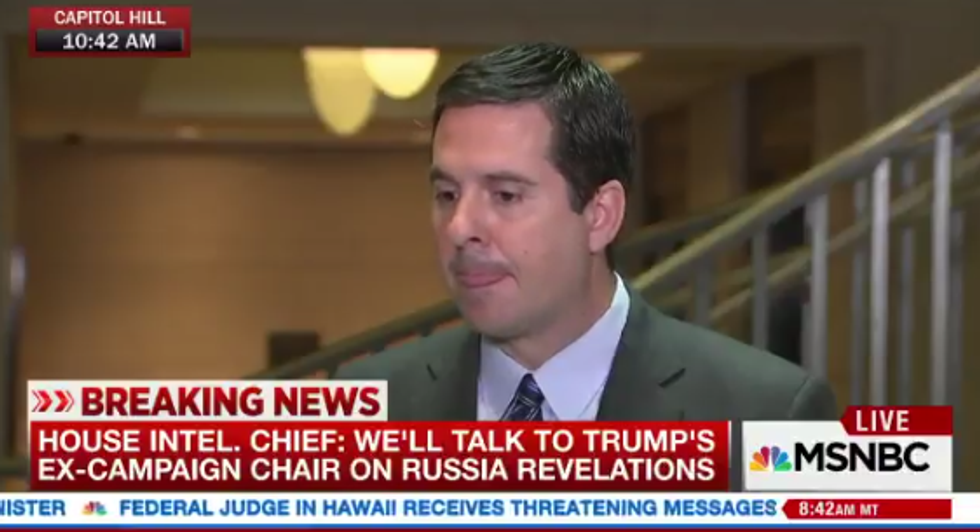 Wednesday, we told you that subpoenas are starting to rain down on TrumpWorld, with the House Intelligence Committee politely shoving one up the bottom of Donald Trump's creepy personal lawyer Michael Cohen, for whatever goods he has that are pertinent to the Trump-Russia investigation. Meanwhile, it was reported that former national security adviser/literal actual foreign agent Michael Flynn was beginning to comply, slowly, with subpoenas on his businesses over in the Senate Intelligence Committee. Well, Flynn had better hope one of his foreign buddies has a copy machine he can borrow, because the House Intel Committee has ALSO just thrown subpoenas at his face, just like they promised! For both men, the subpoenas apply both to their own personal selves, and also to their companies.

So good news, right? Hahaha, well sort of, except that there is a "BUT," and its name is Devin Nunes, the overeager, dimwitted Republican chair of the House Intelligence Committee. Back before Nunes "recused" himself from the Russia investigation he wasn't participating in to begin with, he ran around for a week helping the president obstruct justice on Russia, breathlessly visiting the White House to tell the White House that the White House had given him super top secret classified information about allegedly improper "unmasking" of Trump associates picked up in routine foreign intelligence gathering. This was the REAL STORY, at least according to the syphilitic weasels who live in Nunes's and Trump's brains. (We explained how "unmasking" works, how it's totally normal, and how Devin Nunes's little obsession with it is just more evidence that the boy isn't all that bright. Also, when Adam Schiff, the committee's Democratic ranking member, saw the stuff Nunes saw, he said it was some irrelevant bullshit.)

Well, Nunes may be recused from Russia stuff, but that doesn't mean he can't sit in the corner with his thumb up his sin hole and do his OWN investigation into "unmasking"! Nunes decided to do some special subpoenas that are only for Devin and his daddy Trump, and Democrats on the intel committee are PISSED:

A political feud erupted on Wednesday over the U.S. House Intelligence Committee's probe of suspected Russian meddling in the 2016 presidential election, with charges that the panel's Republican chairman subpoenaed the CIA, FBI and National Security Agency without telling Democratic members. [...]

The subpoenas asked the agencies to provide details of any requests made by two top Obama administration aides and the former CIA director to "unmask" names of Trump campaign advisers inadvertently picked up in top-secret foreign communications intercepts, congressional sources said.

"Subpoenas related to the 'unmasking' issue would have been sent by Chairman Nunes acting separately from the committee's Russia investigation. This action would have been taken without the minority's (Democrats') agreement," said a senior committee aide, speaking on condition of anonymity.

That's right! Devin Nunes will find out if gross Susan Rice and dumb Samantha Power and the weak and failing John Brennan did any unmasking! SPOILER: They did. It was part of their jobs, when they'd run across signals intelligence that mentioned a U.S. person. SOMETIMES it's not necessary to unmask the U.S. person. Other times it's very relevant! Regardless, when these folks requested unmasking, the NSA was the decision maker as to whether their requests should be approved. Brennan explained this thoroughly in his hearing before the House Intel Committee. Susan Rice has explained this. It's actually not THAT complicated.

Of course, Nunes will probably end up stepping on his own dick with these subpoenas, because if he finds out about unmasking requests, he'll probably find out that U.S. persons in Trump's inner circle ended up being picked up in foreign intelligence surveillance because THEY COULD NOT STOP DOING BACK CHANNEL COLLUSION WITH THE RUSSIANS EVERY FIVE GODDAMN SECONDS. Hey, Devin Nunes was on the Trump transition team! Maybe his own name is in there!

No it isn't, you dumb fuckwhistle.

We're glad to see that Devin Nunes didn't learn any lessons from the last time he obstructed justice for Trump right in front of everybody's faces. We reckon it'll make special prosecutor Robert Mueller's job a heck of a lot easier.