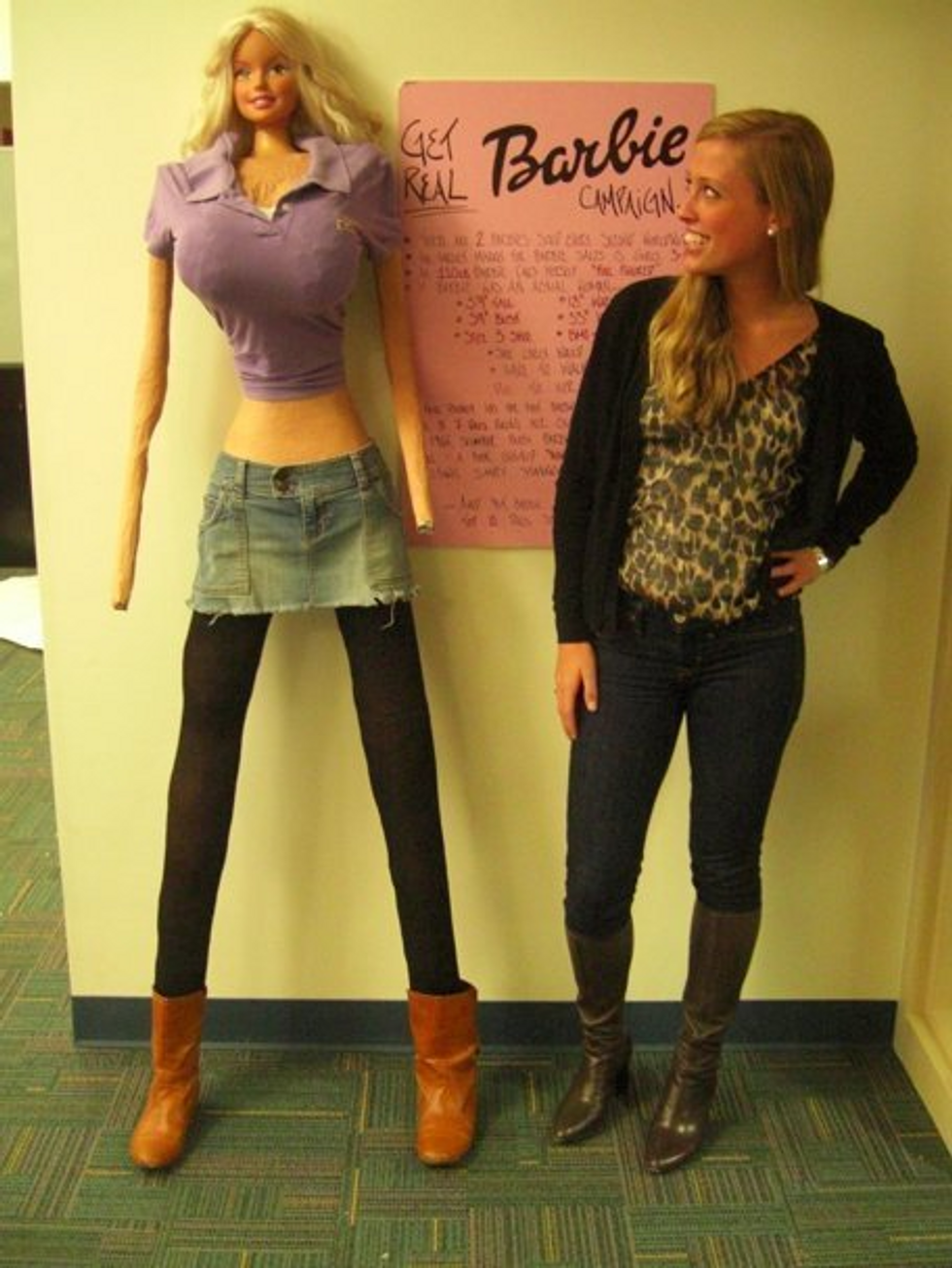 This week we'll talk about dolls, soda and lying because deep down, like most of us, our Corporate Persons are runny-nosed little kids.

Barbie! She's a doll from the 50s that parents buy to distract the kid while they smoke pot on the porch. Once an iconic blonde super waif, Barbie has endured changes in recent years and more are on the horizon. Barbie will now be offered in tall, petite, and curvy body types. Because those are all of the body types!

[contextly_sidebar id="oJ6eTeHT85eK5F1iCdhzdn91QWzrlFLF"]A few years ago, Mattel began offering Barbies with different "skin" pigmentations, not to mention "interactive" features that may also have been spyware. Or not! And considering the reaction when Barbie was a casualty in the War On White Culture, it's probably not surprising that some people are NOT happy that the new Barbies might be anatomically possible. But hopefully these doll traditionalists can take solace in the fact that Chinese-made curvy ass Barbie is a purely profit-driven, overpriced piece of plastic.

The move is about more than just making Barbie look different. Once Mattel’s powerhouse brand, sales of Barbie have plummeted in recent years, as the doll has struggled to remain relevant to little girls who do not look like her.

“The ones in multiple skin tones did phenomenal for Mattel and it showed them that people wanted much more than the blond, blue-eyed Barbie,” Mr. Silver said.

The new Barbie body types should be great for Mattel. But the real people who are upset aren't just those bemoaning the new Barbie as another product of the Politically Correct savages ruining the fabric of a country so obviously built on gender equality. Some people think the new Barbies are not realistic enough, and should be curvier, less like Christina Hendricks, and more wholesome, maybe like perpetually crack-eyed Raggedy Ann. Perhaps that's a fair point. To put it in Bro Speak, these new Barbie versions are all at least "solid 8's" (for one foot plastic dolls that can be repurposed as roach clips or props in '90s music videos).

But the moral here is not about body image or Girls With Low Self Esteem. It's that Mattel's stock went up about 3% after the announcement. So if our corporate people believe that a Barbie with varicose veins or a prolapsed anus will make them more money, that's probably the only principle that will be guiding future doll offerings.

Also, because it's possible you haven't suffered enough this weekend, here's this 1997 classic:

[contextly_sidebar id="0fMbF8NQIAyAzJSX13zcQonDv5Q0hJzA"]A couple of months ago, we discussed New York's investigation of Exxon's long-held knowledge of the effects of man-made climate change. Now California has joined the act like they're not just trying to keep up with the east coast elites or something.

Evidence points to reports showing Exxon's constructive knowledge of its planet fucking as far back as 1977, or at the very least the early 80s. Contrast this with the many years Exxon has spent as one of ALEC's biggest Oil Daddies, funding studies that preach "scientific uncertainty" about the causes of climate change. You know, if climate change weren't a Liberal Media fairy tale, or scheme by profit-hungry scientists, of course.

From a liability standpoint, the key here is what Exxon knew and what was disclosed to investors. They can (and do!) lie to us whenever the hell they want, but Exxon could run into trouble if it's discovered they violated the Sanctity of the Share.

Meanwhile, no one seems to be able to completely stop the Porter Ranch methane leak. 'The what?' you might ask. Just the biggest environmental disaster since the BP Deepwater Horizon spill, but no big. It's not like ISIS made the well malfunction or anything...

We'd like to point out that this massive methane leak is not Exxon's fault (as far as we know). Although, if we had a lot of money to pay a group like ALEC to stop playing in a wind tunnel of feces-smeared Fountainhead pages and write a bunch a bullshit about how this brutal environmental disaster IS their fault, it's possible they would do our bidding. But alas, all of our money is invested in Rumsfeld's next App - Kurds With Friends.

This Week In Brands - Don't forget to tip your Pepsi mixologist

As Americans slowly turn away from carbonated sugar water, our corporate cola people are starting to get creative. On the fine line between creative and desperate, Coca Cola execs are throwing money at Ben Carson. Pepsi, on the other hand, is taking a decidedly different path.

"I'll have a Pepsi Clear Collins, please," is one terrible drink you'll conceivably be able to order at Pepsi's new Kola House set to open this year in Chelsea. The Kola House will have space for live music and conceptual kola kocktails for all the beautiful people who want an expensive prix fixe meal refreshingly paired with 9 Pepsi varietals.

Pepsi representatives emphasized that the branding will be chill - "a logo here or there, but nothing too obvious." Good call, fellas. Chalk up another win for the Apocalypse heralding lifestyle otherwise known as New York Values.