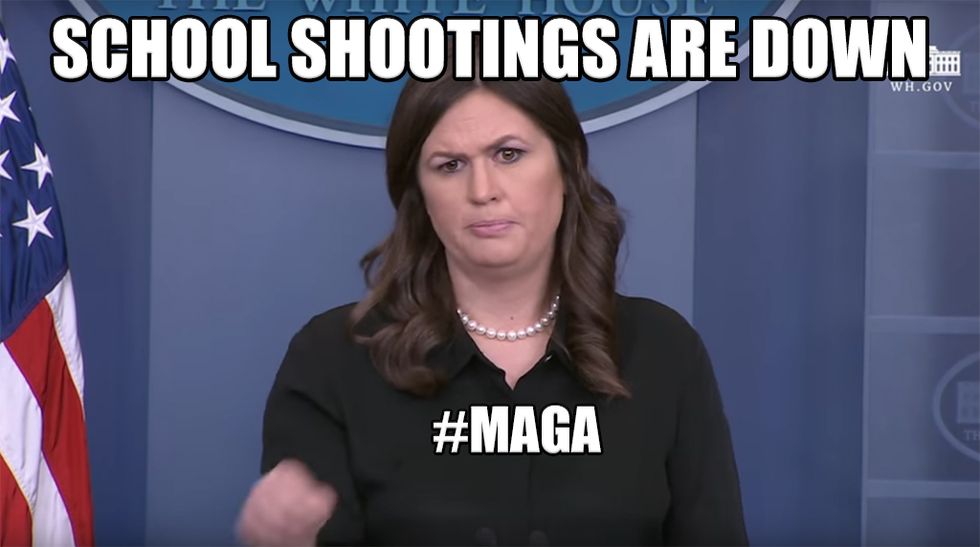 Trump told a bunch of reporters that he would "love" to talk to Robert Mueller about all the collusion and obstruction he didn't do while Hillary Clinton used her emails to poison pizza bagels with Morgellon fibers.

Paul Manafort's lawyers appear to have accidentally spilled the beans on a pre-Mueller mole buried deep inside Manafort's consulting firm. WHOA, if true!

Here's some insight into William Burck, the guy lawyering for Steve Bannon, Reince Priebus, and the lawyer for Trump's White House, and how coordinating all three clients might come back to bite them in the ass.

Democrats on the Senate Judiciary Committee want to give DJTJ's Trump-Russia testimony to Robert Mueller, but Chuck Grassley would rather call a hearing to talk about forming a sub-committee which would create a working group to investigate releasing the testimony.

Republicans are acting like they've lost their minds on TV over the revelation that a technical glitch deleted a bunch of text messages between FBI agents who were bitching about Trump when they sarcastically talked about a "secret society."

The DOJ thinks that the release of Devin Nunes's memo would be "extraordinarily reckless" unless the FBI can actually see it first. Well of course they'd say that, they're probably in secret society cahoots!

Adam Schiff and Democrats on the House Intelligence Committee have written their own memo to counter Devin Nunes's super secret memo that conveniently rails against James Comey, Rod Rosenstein, and Andrew McCabe for spying on Not Americans involved in Trump-Russia. The nerve of this guy!

Trump ALLEGEDLY has so much "Executive Time" that he has been calling Alex Jones, but Jones has been so busy talking to his "CIA, FBI connections, Army intelligence connections, former technical head of the NSA, and a bunch of other people that talk to the president" that he hasn't had time to take Trump's call. Good thing Jones is always hopped up on his energy supplements!

The fallout over Chelsea Manning's weekend romp at an "alt-lite" party this weekend highlights her immaturity and lack of common sense, but at least she started a hashtag.

Senate Democrats appear to be caving on DACA already after Sen. Durbin announced they're open to a spending bill that lifts military sequestration caps, but House Democrats are still demanding taco trucks on every corner.

Trump says he's "open" to finding a way for Dreamers to "morph into" citizens "over a period of 10 to 12 years," like some kind of beautiful Mexican butterfly that hides in a cramped cocoon with dozens of others, desperately hoping they don't get burned for daring to fly.

With a straight face, Sarah Huckabee Sanders dodged a bullet during yesterday's press briefing by noting that mass shootings in schools are a crime wave that has gone down under Trump.

Shortly after passing the Trump/Ryan tax cuts (for the super rich), the Kochs rewarded Paul Ryan and congressional Republicans with half a million dollars, but that's just politics.

Unbeknownst to us, Navy SEAL, Interior Secretary and grifty bastard Ryan Zinke is also, apparently, an oceanographer, as Zinke told CNN Florida geology and ocean currents would skullfuck mother Earth, and that's why Florida is exempt from coastal oil rigs.

While speaking in Davos, Treasury Secretary and C-list comic book villain Steve Mnuchin stated, "a weaker dollar is good for us as it relates to trade and opportunities," implying that the falling value of the dollar could trigger a global currency war. In response, US stocks immediately began a suicidal free fall.

A number of Republican lawmakers are joining Democrats in condemning Trump's decision to slap tariffs on solar panels and washing machines while the US engages in unnecessary renegotiation of NAFTA. Meanwhile, in Davos, Commerce Secretary Wilbur Ross told all the pussies from Not American that "Trade wars are fought every single day."

That 24-year-old MAGA bro heading up the Office of National Drug Control Policy is "You're Fired-ing" himself after reporters found out he lied on his resume(s).

Much of K Street is clearing out under the Trumpire now that the lobbyists have found Trump and Co. are too stupid and unpredictable, but they're still raking in cash.

Justice Clarence Thomas has really weird opinions about sexy underwear parties and strippers according to a new SCOTUS ruling on a DC house party.

That Baltimore cop who turned off his body camera while ALLEGEDLY planting evidence has been indicted on charges of misconduct and fabricating evidence. Good.

Last week a Texas judge stopped jury deliberations for a child sex trafficking case to inform them that God told the judge to tell the jury that God said the accused was innocent. Thanks, Jesus!

As world leaders patronize/ignore Donald Trump in Davos, they're happily filling all the holes in global leadership positions the US used to own. Yesterday, French President Macron stated that the US's absence is the EU's gain.

Mitch McConnell's moderately better half, Transportation Secretary Elaine Chao, told a bunch of people in Davos that if you don't like Donald Trump you can GTFO, and that WEC attendees should "feel very flattered" our God-Emperor has graced them with his divine presence.

Trump's habit of mansplaining to British PM Theresa May has irked many politicos in the UK, and the UK's refusal to jerk Trump off has turned Trump into a whiny titty baby.

Turkey's invasion of Syria to fight US-backed Syrian Kurds is prompting a foreign policy crisis that the Trump administration is hoping you won't notice.

After more than a decade of leading the LIBERAL Fempire at Planned Parenthood, Cecile Richards is planning to step down.

A trial is underway for a St. Paul religious leader who ALLEGEDLY murdered his wife after being doxxed during the Ashley Madison hack that exposed hundreds of pervy dudes trying to cheat on their wives.

Here's a story about two high school student journalists who started digging into why a teacher was fired and ended up fighting a battle against state censorship.

A fast food company decided to teach people about the importance of net neutrality and troll Ajit Pai by making customers pay $25 for a shitty cheeseburger. [Video]

And here's your late night wrap-up! Stephen Colbert talked about Trump in Davos;

Jimmy Kimmel thinks Trump should take the money for his wall and just fuck off; Seth Meyers knows Trump's inner thoughts; The Daily Show noted that Gerrymandering is worse than Trump-Russia; Jordan Klepper looked for Muzzlins in Dearborn, Michigan; Conan O'Brientalked to super mad Haitians; and Samantha Bee is going around the world apologizing for America.

And here's your morning Nice Time! A one-horned rhino calf!

We're ad-free and reader supported, so give us money or we'll throttle your computer with obnoxious ads. make