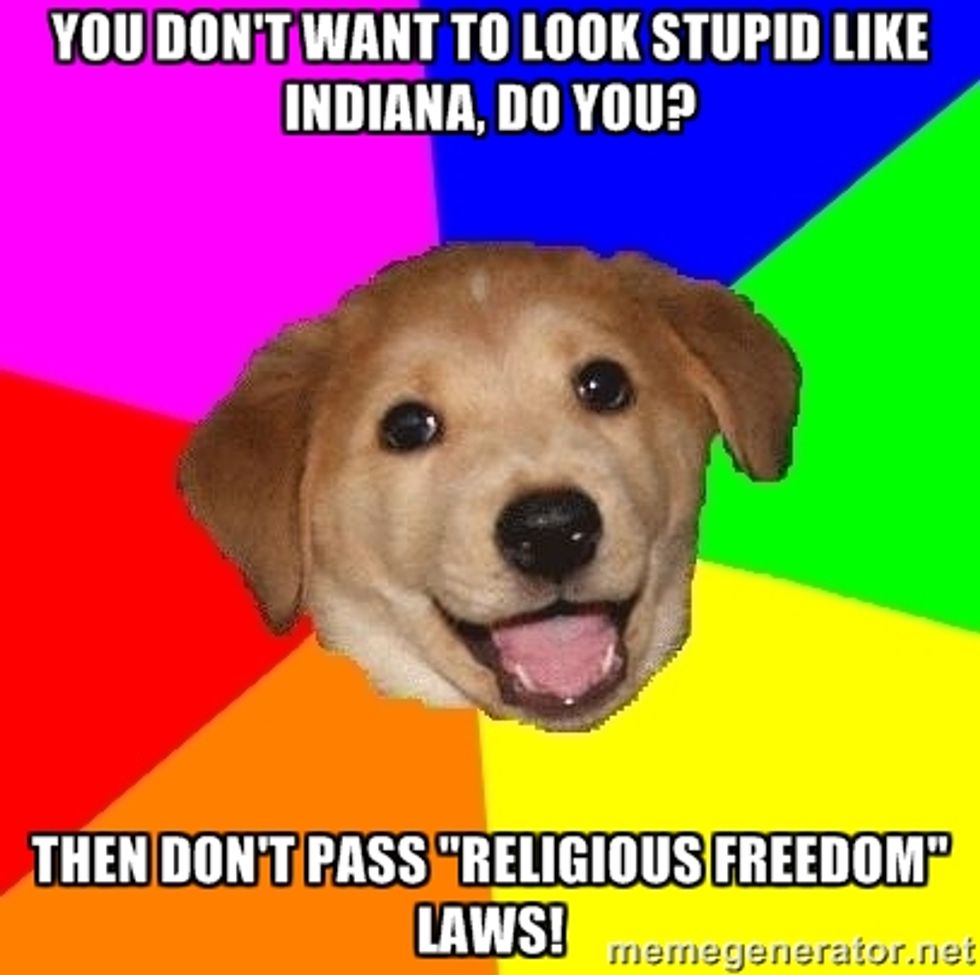 It's not all bad news on the Religious Freedom front! Yes, Indiana is suffering under the weight of a dumb governor who signed a "religious freedom" bill explicitly designed so that the put-upon wingnuts of the state don't ever have to look at gay people. And yes, many other states are currently considering similar laws. However, news comes today that there are three places where Republicans (!!!) are standing up and mouthing the words, "I do not want our state to be a national joke like Indiana." It doesn't necessarily mean the laws won't pass -- for every smart Republican there are exactly 7,000 stupid ones -- but at least there is a glimmer of sanity on the horizon.

North Carolina:  One of those Religious Freedom Restoration Acts (RFRAs) is working its way through the North Carolina lege right now, but Republican Gov. Pat McCrory is making the wingnuts mad by pointing out that these bad laws solve a problem that doesn't exist:

“What is the problem they’re trying to solve?” McCrory said during a radio interview. “I haven’t seen it at this point in time.”

Because it's not there, duh.

McCrory compared the “Religious Freedom Restoration Act,” whose sponsors include two Charlotte lawmakers, to the effort to allow transgender persons to use the bathroom of their choice. Both are not needed, he said.

McCrory also said he opposes a Senate-passed bill to give magistrates the right not to perform same-sex marriages if they say that violates their religious beliefs.

“I don’t think you should have an exemption when you took an oath to uphold … the constitution of North Carolina,” he said.

We are not sure how the RFRA is similar to pro-transgender "Seriously, I just have to pee" laws, but we are glad to see that, on this issue, Governor McCrory is smart. Also, ha ha to the part about how magistrates should do their fucking jobs. If part of your job includes issuing marriage licenses or doing courthouse weddings, and you refuse to do that for legal marriages because your Sincerely Held Religious Beliefs won't let you, perhaps you are not qualified for that job! Same goes for the bakers, the florists, the photographers and the caterers, assuming you can find a heterosexual caterer who is a bigot. Hopefully Gov. McCrory is looking at Mike Pence and saying, "man I do not want to be him," and will veto it if the wingnuts send it to his desk.

Georgia: A similar Fuck The Gays bill may be on its last legs, after Georgia legislators cancelled a hearing that was to be held Monday, determining its fate. What happened, you ask? Well, some decided that "hey, cool, religious freedom is great, but let's also amend it to make sure you can't use it to discriminate against people." Sounds sane, right? Except that, despite anti-gay wingnuts always protesting that these laws are only about their religious freedom, the real purpose of these laws is to hurt gay people. Why even HAVE a law like this if you can't do that part? Just like Jesus said in the Bible, "For I was hungry and you gave me something to eat, but you didn't give any to Derek, because he's a little light in the loafers, LOL."

Here's what went down:

In Georgia this past Thursday, in a surprise 9-8 vote, the Judiciary Committee voted to amend Senate Bill 129 to add language making clear the bill could not be used to discriminate against anyone already protected by any local, state or federal law. It was quickly tabled by supporters who said adding anti-discrimination language “gutted” the bill.

The amendment was sponsored by Rep. Mike Jacobs, R-Brookhaven, and the deciding vote cast by Rep. Beth Beskin, R-Atlanta. Beskin, just a day before in subcommittee, had voted the other way — to deny the same protections against discrimination. Jacobs and Beskin, along with Rep. Jay Powell, R-Camilla, the other Republican to vote for Jacobs’ amendment, were vilified by conservatives.

It remains to be seen whether the bill will be revived before the 2015 legislative session is over, but kudos to those three Republicans for being a little bit sane. The Atlanta Journal-Constitution does mention that there is a possibility of a "compromise" that would specify that the law would protect against discrimination based on Georgia's current state law, but Georgia does not protect based on sexual orientation yet. So that would not be good! We wish this bill a timely and painful death, also too.

Montana: This one's officially dead for the moment! HB615 was a "religious freedom" bill, but a little bit different from the others. Instead of just legislatively hurting the gays, this bill would have sent the matter to voters in a referendum, who could then decide how much they hate 'dem queers. Democracy! The bill went down in a 50-50 vote, even after the sponsor pulled out his camouflage Bible. No seriously, that is what happened:

After a heated floor debate that moved the bill sponsor to raise his camouflaged Bible, state representatives failed to pass House Bill 615 on a 50-50 vote. The bill resembles a recent Indiana law that allows open discrimination for the sake of "religious freedom."

Maybe the Camo Bible blended in with its surroundings and nobody could see it! Speaking against the bill, a Native American Montana representative pointed out that this bill was so broad, it would embolden hate groups, essentially giving them the state's stamp of approval:

Crow tribal member Democratic Rep. Carolyn Pease-Lopez said there are nine hate groups in Montana and the bill would stop just short of allowing them to kill her.

"American Indians are the walking dead because of how they're treated by people who discriminate," Pease-Lopez said. "And now we're going to license it. We're going to elevate it."

Pease-Lopez was followed by an openly gay member of the House, Democrat Bryce Bennett of Missoula, who essentially said, "Um, so let me get this correct, we are voting today on whether it's okay for the rest of you to discriminate against me? Are you fucking kidding?"

The Helena Independent Record points out that nine Republicans sided with all the Democrats in opposing the bill, but that if one of the Republicans changed their vote, it would be resurrected like Jesus and go on the November 2016 ballot. So maybe don't do that, Nine Republicans! You wouldn't want your Wonkette to call you assholes, would you? KEEP IT DEAD.