Rep. Duncan Hunter Was Just Born Too Late, Now You Can't Even Daydrink And Carouse And Steal All The Campaign $$$ 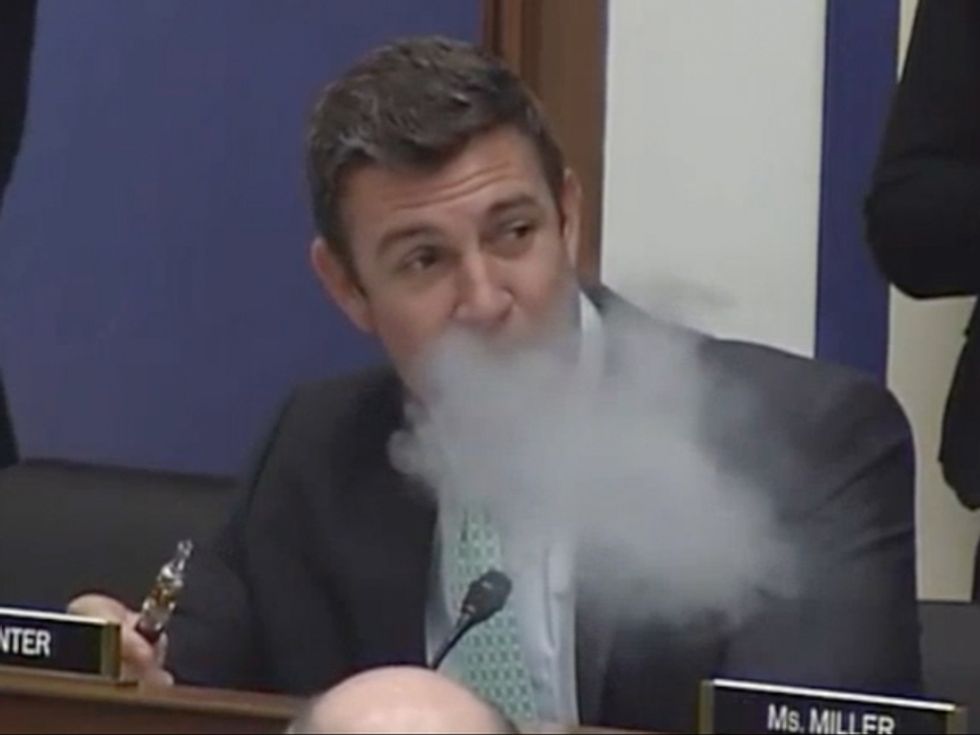 Founding member of the "Bro Caucus"

Say, remember last month when Rep. Duncan Hunter (R-Vape Hut) said that weird thing about Rep. Darrell Issa (R-Never Convicted) maybe running for his seat if he was to BLOW UP IN THE AIR?

Well if you look up right now, you might just see poofs of Duncan Hunter floating westward over the streets of Capitol Hill! This morning Politico beat the crap out of Hunter WITH WORDS, and we would not be for shocked if Hunter announces this week that he'll be spending more time with his family come January.

Duncan Hunter is, as they say, no stranger to controversy. He's been under FBI investigation for a year for questionable charges on his campaign credit card. Which is just UNFAIR! Who among us hasn't spent $1,400 for dental work, $1,600 in private school tuition, $1,300 on video games, and $600 on an airline ticket for a pet rabbit, plus another $50,000 of personal expenses out of campaign coffers? (Investigators say there might have been a couple of hundred thousand more.) A grand jury in San Diego is currently considering his case, but no charges have yet been filed. Or as Hunter's father, himself a former Congressman put it,

[H]is son is not guilty. He called the congressman a “highly moral person of great character,” touted his legislative achievements and predicted that “he’s going to be president someday.”

“The story here should be: A year has gone by, almost a year since the investigators have had every single one of his records. A year! And there’ve been no charges. … And the reason for that is he’s totally clean on this,” said Hunter Sr., who’s been living in Texas part time while Hunter’s family stays in his parents' California home.

The Politico story is full of sexxxxy dirts about Hunter's personal life. They're not saying that he's a drunk who sleeps around, but ...

Hunter’s personal problems in Washington started early. While Hunter Sr. rarely drank and was careful never to be seen alone with another woman, Hunter was more carefree, said sources close to him.

And we are not a marriage counselor, but we think Hunter and his wife, Margaret, an art teacher who manages his campaign finance disclosures, may need to work on communicating more clearly. For instance, he could say, "Honey, I don't like it when you use the campaign credit card to buy stuff at the mall." And she could say, "What kind of husband throws his own wife under the bus by blaming all his campaign troubles on her."

Hunter would not answer questions about whether Margaret Hunter used the campaign card for personal expenses or ever asked him if she could. Hunter did suggest POLITICO look at where the charges occurred, suggesting those that raised red flags were made in California while he was in Washington: “You can see where I was during the transactions ... and you can draw your conclusion.”

Hunter also said he never compiled or signed his campaign’s Federal Election Commission reports. He said his wife, who ran his political committee, knew the rules on campaign disbursements.

“My wife, she ran my dad’s FEC [reports] and his campaign prior to us getting married … so I assumed — not assumed, she knew the rules. She knows the FEC rules ... as much as anybody who does that stuff,” Hunter said.

He seems nice! A true gentleman!

Former staffers to Hunter said he and his lawmaker friends — dubbed the "bros caucus” by his aides — would regularly go to the Capitol Hill Club, a Republican hangout, to drink beer, sometimes during the day. Congressional aides have recounted to POLITICO at least two stories of recent official meetings where lawmakers questioned whether Hunter was intoxicated.

There was some sad stuff about Hunter having to sell his house to pay back all the money he stoled from his campaign, and his wife and kids moving in with Hunter's parents. And while we do feel sorry for the Hunter kids, it's tempered by the fact that their father goes to work every day trying to cut the safety net out from under kids whose parents don't have a campaign credit card to fall back on when money gets tight.

For now, Hunter insists he's running again in November. His campaign spent $179,000 in legal fees last quarter, while raising only $51,000, far less than Democratic challenger Ammar Campa-Najjar. But the Cook Political Report gives California's 50th District a Republican advantage of 11 points, so House Republicans are only grumbling about Hunter's prospects on background.

We at Wonkette have given the matter serious consideration, and we think Hunter should most definitely run again. The people of Escondido are lucky to have a man of Duncan Hunter's integrity representing them. A man who protects our law enforcement officials from mean paintings and vapes during Congressional hearings, FOR FREEDOM. If Hunter fails to drop out before the March 9 filing deadline, leaving only Democrats on the ballot, or if he gets indicted between March and November, well at least he'll have proved he ain't no quitter! You can do it, Bro!

Please money us! We promise to spend none of it drinking with the Bro Caucus!