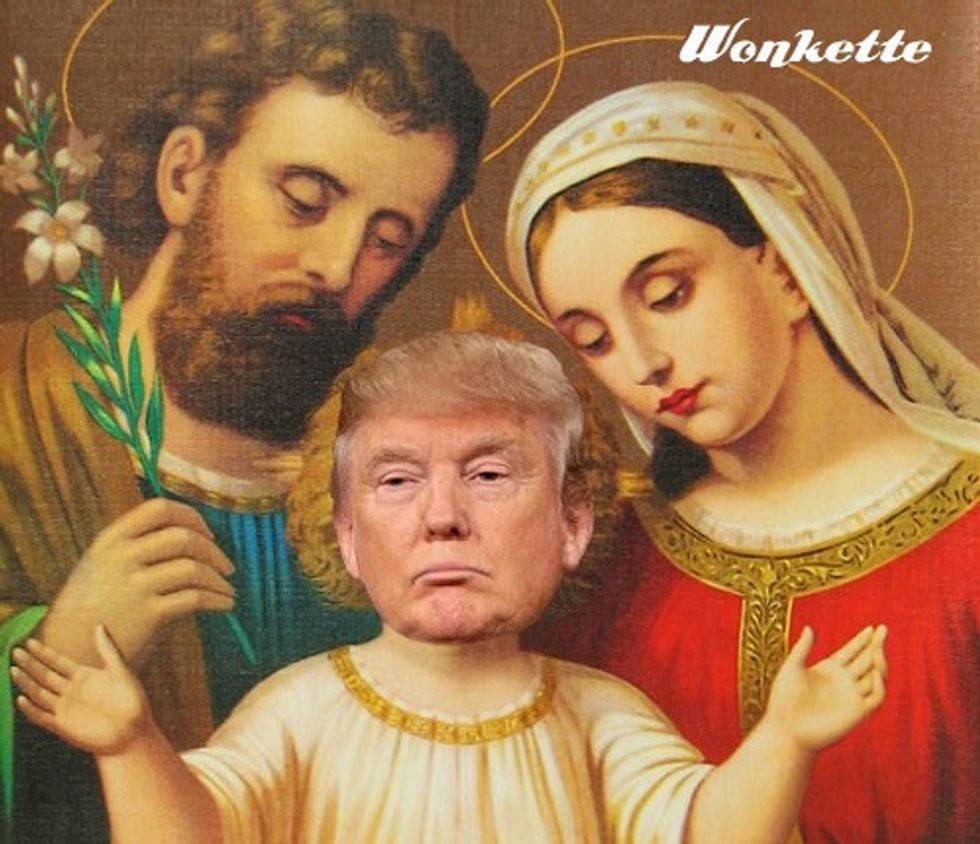 You have to hand it ("it" in this case being a flaming bag of dog poo) to the Republican National Committee for masterfully trolling America on Sacred Baby Jebus Day with their "controversial" official message celebrating Christmas. It stands to reason that a president who was elected in part with the help of internet trolls has now led the GOP to adopt trolling as an official communication strategy. In case you had the good sense to stay offline all day Sunday, here's the message, courtesy of RNC chair Reince Priebus and Co-Chair Sharon Day. Notice anything odd in the first paragraph?

Why, yes, that line about how "this Christmas heralds a time to celebrate the good news of a new King" did raise a whole bunch of eyebrows all over the Twittersphere, seeing as how it sure as heck sounds like a celebration of our new Combed-Over leader. The message had its intended effect: People were certainly talking about it, though the talk was mostly of the "You've gotta be fucking kidding me" variety, not simply because of the implied "Trump is like Our Saviour," but also because since when does America have a king? (You know, other than when Republicans spent eight years insisting Obama thought he was one.) Decent people like Ben Shapiro were shocked, shocked that anyone could possibly think the message referred to anyone but Jesus, you touchy PC liberal whiners:

No intentional toying around with meaning thanks to a political party welcoming the good news of a new King, especially this Christmas. No, not trolling at all. RNC spokesKrampus Sean Spicer was simply disgusted that any of you terrible, terrible libs would sink so low as to politicize a perfectly routine message celebrating the birth of Christ. You people make him sick, you really do:

This would be from the party that has made the alleged "War on Christmas" a central theme for ages. Stop politicizing Christmas, you liberal youdegenerates! Also, for Christmas 2017, be sure to pre-order your special RNC souvenir reproduction of Negan's baseball bat "Lucille" from The Walking Dead, complete with festive red and green barbed wire and the words "Merry Christmas" carved into it.

After all, this message was no different from any other RNC official message celebrating Christmas, going back YEARS! Like in 2011, when... there is no mention of the arrival of a new King that year -- or even of Christ as a King at all. Priebus and Day simply said "we pause to celebrate the Child whose humble birth so changed the world. On Christmas, may the hope He brings warm our homes and fill our hearts." And of course reminded us to Support the Troops, who actually got a longer paragraph than baby Jesus.

How about 2012? "It's my prayer that the Christ Child brings peace to our hurried lives and our often turbulent world. And in the words of that joyous hymn, 'Let every heart prepare Him room.'" And then the Troops again. No Jebus as royalty in that one either.

Surely 2013 had something about Christ the New King whose arrival we all celebrate? Not so much. You got your rejoicing in the "enduring good news of Christmas,” your celebrating "the humble birth of the Child who changed the world," and rejoicing in the "Savior whose message is love and peace." There's even some concern about all the people hurting in the world (doubtless because of Obamacare), and the troops again, though they've been demoted to the final paragraph this time.

2014 was simply kind of weird -- We're sure there was a Christmas message, but it seems to have vanished from the RNC's website:

Reince Priebus did at least leave a nice photo on Facebook (without any crowns):

The official RNC statement is probably out there somewhere in the aether, but we couldn't find it. Let us know if you do! We'll bet a nickel there's nothing about celebrating our new King in it, though, because the 2015 RNC Christmas message is every bit as Kingless as those from 2011-2013.

Gosh, why are liberals all worked up over some very carefully worded trolling -- with built-in plausible deniability -- in 2016's Christmas message, which is exactly like all other RNC Christmas messages except for how it suddenly has a completely new theme of welcoming this year's newly crowned King? Don't you stupid liberals know anything about Jesus?

More to the point, apart from generating a whole bunch of attention on what's usually a news-free holiday, is there some new hellish Trumpian news the Christmas message is supposed to distract us from? Like perhaps the alleged extramarital canoodling of Jason Miller? Nah, that's ridiculous. This is the straight-talking administration that never would stoop to mixed messages. Except perhaps in the locker room.

So anyway, we hope you all had a wonderful Christmas, which is a celebration of the arrival of a new King (who is Jesus and no one else), and we look forward to a happy 2017, when we all vow to renounce all the works of Satan, especially after January 20. No particular reason.