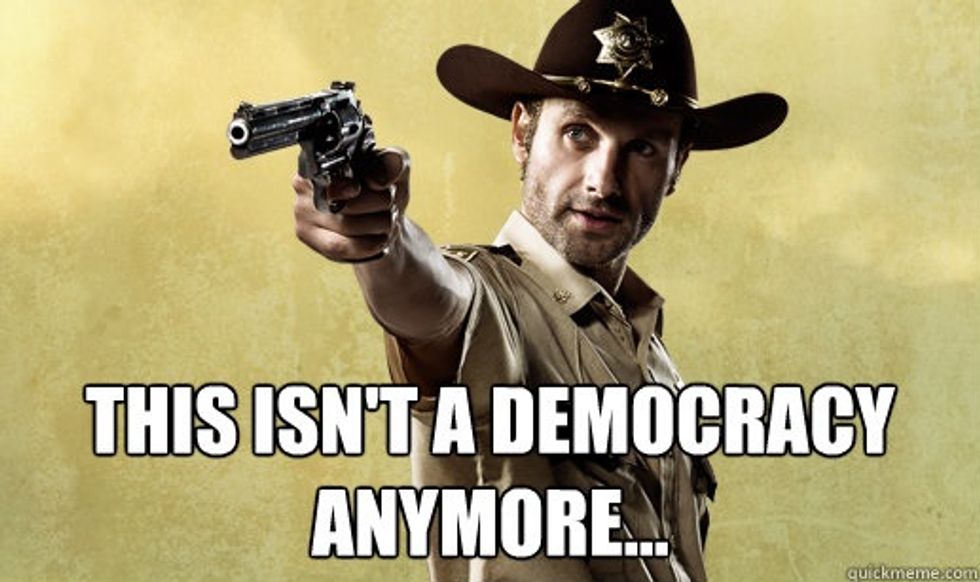 Yes, yes. It's a Ricktatorship.

Remember how exciting it was that Democrats in the Virginia House of Delegates (they can't just have "representatives" because the state constitution says everything has to be Ye Olde Quainte and Olde-Timeye) had, in a single election, erased a Republican majority when a recount last month gave the Democrat, Shelly Simonds, the win by ONE VOTE, and we were all excited, because HOLY SHIT? Unfortunately, after that recount, and because the Democrat Simonds had won, the Republicans challenged to have this one contested ballot included, and the three Republican election judges said, sure, looks like that there's a vote for Republican David Yancey, the incumbent. Seriously, this goddamned mess of what any sane election system would toss as a spoiled ballot gave Yancey one more vote, and a tie:

The fuck is that thing? The election judges gave the ballot to Yancey after deciding the line drawn through the bubble for Simonds indicated the voter had changed their mind -- but a similar "X" through the single vote for Ralph Northam seems to indicate the voter might just have well started by mis-marking the ballot for Yancey. We say it's broccoli, and we say the hell with it. And so does Virginia state law, not that anyone was paying attention.

For more on what a complete farce the recount challenge was, see this excellent overview by Carolyn Fiddler. Just one example of how Team Yancey disregarded the law in order to get that one fucked-up vote included:

Oh, and there's plenty more: One of the three election judges had been recommended for the job by Yancey himself, three years ago, but didn't recuse himself. Fiddler details other deviations from proper recount procedure that should have led to Yancey's challenge being overturned. But hey, the Republican-appointed election judges had a Republican seat to save. And the first fallback, the gerrymandering that meant a 10-point advantage in total votes statewide barely resulted in a freaking TIE, had already failed to sufficiently disenfranchise Democrats. Clearly, Virginia needs a voter fraud commission.

Simonds sued to overturn Yancey's challenge, but a three-Republican-judge panel said no, ma'am, that's a perfectly cromulent vote for Yancey, and today a random drawing was held, giving the win to Yancey.

Hey, in case it makes you any less outraged, Simonds and Yancey's names were placed in identical film cannisters inside "a special bowl crafted by the resident potter at the Virginia Museum of Fine Arts." Whose budget the one-vote Republican minority in the House of Delegates will probably cut.

We can still feel great about Democrats having taken 15 seats away from Republicans in Virginia's lower house, but that ballot stinks -- and let's hope it fires up Virginia Dems enough to keep them good and mad until the 2019 state elections. Ralph Northam will be inaugurated as governor on January 13, and that single R vote may mean the goal of expanding Medicaid in the state for 400,000 Virginians may fall just short, unless a couple of Republicans in the lower house can be persuaded to vote for it.

Republicans maintain a 21-19 majority in the state legislature's upper house (Virginians charmingly call it the "Senate"), so even if Simonds had won the Delegate seat and forced power-sharing, passage of Medicaid expansion wasn't guaranteed. The Senate had at least agreed in its last term to a modified Medicaid expansion that would have used public funds to buy poor people private insurance, so there's still some prospect of a deal for full expansion of plain old Medicaid Medicaid. With any luck, Virginia Rs will listen to the polling, which shows widespread public support for Medicaid expansion -- except among Republicans, of course.

A few Virginia Rs might even take the risk of supporting Medicaid expansion in hopes of not being defeated by a Democrat in 2019, eh? Could that happen? We like to think nice thoughts.

Then again, in an indication of Republican respect for fair play for all, The Hill notes that while Virginia law allows the loser of a tie-election draw to request one more recount, Ms. Simonds said in advance that she "would not request a second recount if she lost the drawing. Yancey declined to make the same pledge."

Yr Wonkette is supported by reader donations. Please click here to send us money, which we are happy to say can't be gerrymandered.