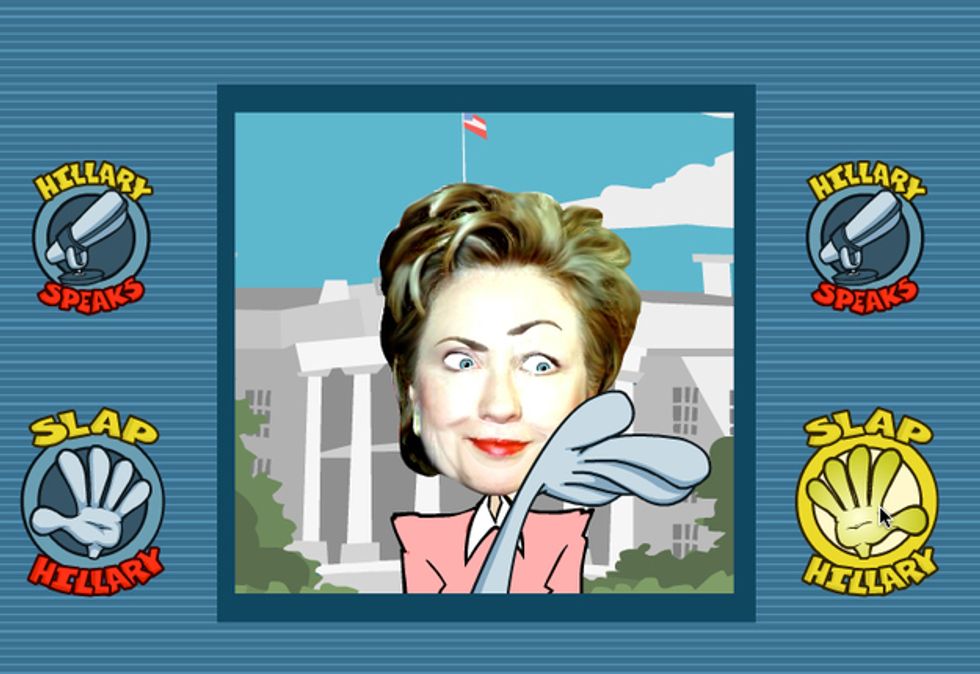 Get ready for lots of '90s nostalgia if Hillary Clinton gets the 2016 Democratic nomination. It's already underway, as a Republican superPAC,"The Hillary Project" has recycled this hilarious "Slap Hillary" game on its website. The game allows the viewer to administer a slap to a cartoon Hillary or to hear one of two brief audio clips that the producers must think are inflammatory. And as Buzzfeed notes, it was created in 2000, but the Hillary Project site "began spamming reporters to its existence Monday with the tweet 'Have you slapped Hillary today?'” Oh, and did we mention the cartoon Hillary figure is wearing a pink pantsuit? This is cutting-edge political satire, kids.

Beyond the misogyny, this is quite possibly the laziest use of Flash animation ever put together -- at least in the "throw a shoe at George Bush" game, the target ducked. Buzzfeed links to a 2008 blog post that says the game was created in 2000 by

For what it's worth, IMDB doesn't seem to agree, but maybe she's an animation bigwig. The blog also credits her with creating "Slap Bill, Slap Osama, and slap the Three Media Stooges," but the links to these "animation classics" are dead. Sorry, online gaming enthusiasts!

The Hillary Project's "games" page also includes such timely satire as a little game where you make Hillary do funny dance moves while wearing a pink pantsuit, and "Street Fight: Obama vs Hillary," in which Hillary is wearing a pink top and tights for a change. Oh, and there's a "petition" that you can sign, which will somehow save America from a woman whose "name alone strikes dread in the hearts of freedom loving Americans," by getting its signers on a fundraising list forever.

Heh. Pantsuits. It's going to be a long three and a half years, isn't it?