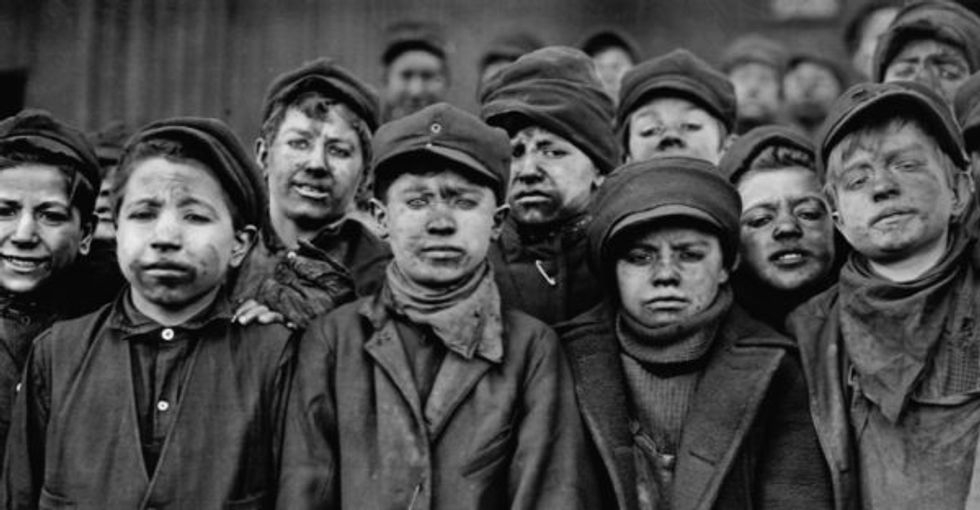 Who WOULDN'T want to create more jobs like this?

Hey, unemployed takers, were you encouraged by the Make America Work Again plan revealed at the Republican National Convention last night? Turns out that all we really need is a pick, shovel and some gumption, and we'll all be highly paid union members creating clean, safe energy by workin' in a coal mine!

Now, some critics might nitpick about last night's agenda mostly being a Salem witch trial about Killary KKKlinton's email leaks to Lucifer, but there WERE some shoutouts to how Obama 'n' friends have destroyed the economy of America's heartland by making oil, gas and solar energy cheaper than coal. And isn't complaining the real "coming up with solutions"?

"In 2016, we need to keep that momentum going. We need to keep the Senate in Republican hands and win back the White House. We need to put coal miners and oil drillers back to work, not target them for extinction, as Hillary has promised."

Like much of the Cleveland agenda, Sullivan's remarks about Clinton and coal have to be run through a wingnut translator. Clinton somewhat inartfully said in a town hall in March that West Virginians need help transitioning from a coal-based economy, because the coal industry is in decline due to other forms of energy becoming less expensive, and because coal creates the most carbon pollution in a world trying to reduce human-caused global warming. Here's how she put it, off the cuff:

"So for example, I'm the only candidate which has a policy about how to bring economic opportunity using clean renewable energy as the key into coal country. Because we're going to put a lot of coal miners and coal companies out of business, right?

"And we're going to make it clear that we don't want to forget those people. Those people labored in those mines for generations, losing their health, often losing their lives to turn on our lights and power our factories.

In wingnut, that comes out as "I, Hillary Clinton, will use every power granted to me by Lucifer to ensure every coal miner on earth dies penniless and alone."

Sen. Shelley Moore Capito (R-West by God Virginia) said much the same dumb stuff as Sullivan, while also pointing out that home prices are depressed in her state, since you could buy pretty much all of them for the cost of one Hillary speaking fee, har har har, amirite?

We could point out that West Virginia coal mine employment has been spiraling downward since the 1940s because of automation, or that strip mining is creating a permanent environmental catastrophe in the state's beautiful mountains, or that Hillary didn't actually promise to personally destroy the coal industry, but we'd be wasting our breath trying to talk to Donald Trump supporters.

So off to work we go!