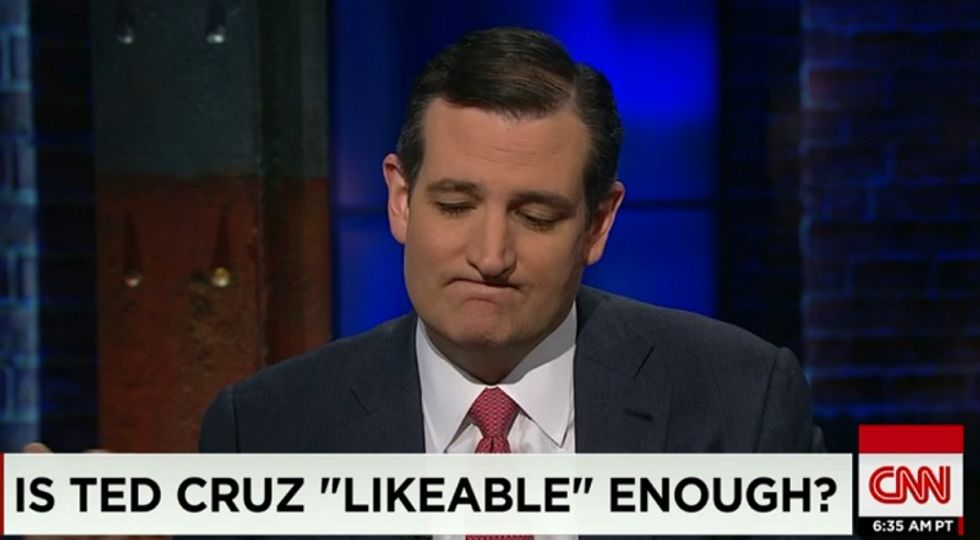 [contextly_sidebar id="RM1KZ8BiVuM7dC6HgFEkYKMWQLly062e"]Look, we hate Ted Cruz. We talk about it often. Democrats hate him, not because he's threatening in the electoral way, but because he's a pompous sack of Canadian goose droppings with absolutely no breeding, the kind of man who thinks it's funny to make "jokes" about Joe Biden the same week his son died.

[contextly_sidebar id="tk1rFyNOMYwkZ7Un7yvlquzU3SWvF90b"]What's funnier is how all his fellow Republicans hate him too. John McCain, how would you like to defend your "friend" Ted from charges that he is a Cuban infiltrator from Calgary intent on ruining our American way of life? Haha, the Panamanian John McCain will PASS. Mitch McConnell? Fuck no. Carly Fiorina? She wishes Ted Cruz actually loved America, THAT'S ALL.

So let's pile on some more. Here is former Republican presidential candidate and Viagra eater Bob Dole, to explain what happens to his medically induced erection when he sees Ted Cruz's punchable face:

“I question his allegiance to the party,” Mr. Dole said of Mr. Cruz. “I don’t know how often you’ve heard him say the word ‘Republican’ — not very often.” Instead, Mr. Cruz uses the word “conservative,” Mr. Dole said, before offering up a different word for Mr. Cruz: “extremist.” [...]

"And then, of course, he doesn’t have any friends in Congress. He called the leader of the Republicans a liar on the Senate floor.”

Dole added that Hillary Clinton would "win in a waltz" against Ted Cruz, which either means he thinks she would beat him for president, or maybe it means old people like Bob Dole have waltzing competitions while they're waiting for the dick pills to kick in. Regardless, it means Ted Cruz fucking sucks.

[contextly_sidebar id="6Ytl92jKM7BjqvXfyHflSnd7Cc9qxq2Y"]Of course, this is not the first time Dole has said things like this. He has made his hatred for Ted Cruz just about as public as every other human being in America does.

What's even HILARIOUS-er about it is that Republican establishment old timers like Dole are absolutely terrified of Donald Trump too, but they're willing to take a chance, as long as it means the long form douchebag birth certificate of Rafael "Ted" Cruz doesn't get anywhere near the Oval Office:

The only person who could stop Mr. Cruz from capturing the nomination? “I think it’s Trump,” Mr. Dole said, adding that Mr. Trump was “gaining a little.”

He said he had met Mr. Trump only once, 30 years ago. “But he has toned down his rhetoric,” he added. As for Mr. Cruz, he said: “There’ll be wholesale losses if he’s the nominee. Our party is not that far right.”

Oh yes it is, Bob Dole. But we're still enjoying reading all these words about Cruz being a piece of shit!

Let's hear from a Republican operative, who would like to say Donald Trump may be gross and nasty and terrible, but at least he's not that foreign-born cow turd Ted Cruz:

"Cruz has rubbed a lot of people the wrong way in D.C., whereas Trump hasn't, and Trump up until this year was pretty much a player," said Craig Shirley, a longtime GOP strategist and charter member of the establishment. "Ultimately, the Washington establishment deep down -- although they find Trump tacky or distasteful -- they think that they ultimately can work with him. Deep down, a lot of people think it is an act."

Another former Republican Senate majority leader, Trent Lott (R-Miss.), said the same day that he, too, would take Trump over Cruz. That came a day after Iowa Gov. Terry Branstad, the longest-serving governor in the nation, broke his longstanding neutrality to encourage caucus-goers to vote against the Texas senator.

Whew boy, this is fun.

It's not that we're quoting a bunch of people saying they hate Ted Cruz just because we loathe him and think it's funny, though that's part of it. The actual point is that if Ted Cruz were on fire, Republicans would roast marshmallows wrapped in Canadian bacon and feed them to Donald Trump, out of spite.