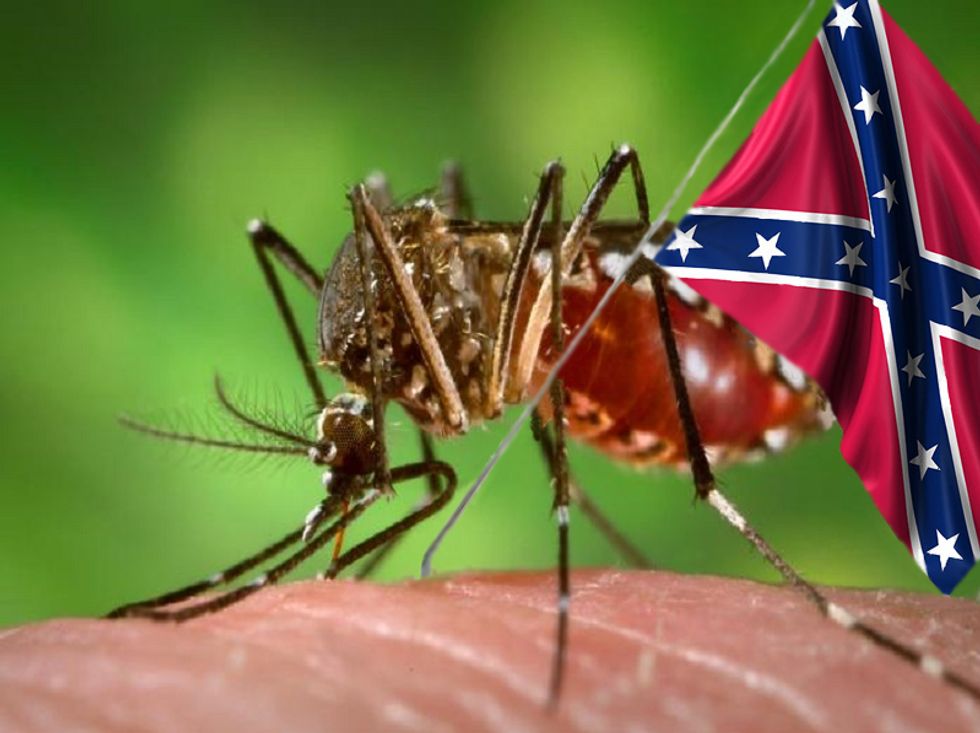 The fever will rise again

You might have heard about this Zika virus thing that's beginning to show up in the United States, and how it causes microcephaly and is not healthy for children and other living things? And to make matters worse, Republicans in Congress didn't seem to consider funding for the federal effort to fight Zika especially important -- at least, not important enough to appropriate new funding for. Instead, they wanted to pay for any new funds for Zika by cutting money elsewhere, like from funds already budgeted for Ebola, which is so 2014 and unstylish now. But eventually the Senate passed a bill to provide $1.1 billion for Zika -- a bit over half what the administration had asked for, four months ago -- and so did the House, although they added in some fun stuff like cuts to Planned Parenthood, because why would the government want to provide funding for contraception when there's this nasty sexually transmittable disease out there?

And now, for some reason, Democrats in the Senate aren't willing to go along with the monstrosity that Republicans are calling a reasonable compromise -- with all that extra crap that Democrats can't abide. Tuesday, Democrats blocked the bill (as near as we can tell, on its way to the conference committee where differences between the Senate and House versions would be ironed out) on a procedural vote. They weren't willing to accept cost shifting from other programs or cuts to family planning, not to mention the other fun stuff the House threw into the bill, like cuts to the Affordable Care Act -- yes, let's fight a disease by cutting health care -- and weakening environmental restrictions on pesticide use. Not so much to allow wider use of pesticides against mosquitos, mind you, which could be spun as a necessary step to fight the disease, but just plain tossing out some sanctions on violations of the Clean Water Act, so pesticide spills wouldn't be punished. Fun, huh?

Since the Zika funding is attached to the annual bill funding military construction and veterans affairs, the House added in a vital measure that will help The Vets and fight Zika, somehow: They added language reversing a previously passed law restricting the display of the Confederate flag in federal cemeteries. Because dammit, what good is a House majority if you can't use it to add something monumentally dickish to a bill that absolutely has to be passed? That one didn't go over with Democrats any better than the Planned Parenthood cuts, and Minority Leader Harry Reid ridiculed it on the Twitters:

Needless to say, since Democrats aren't willing to go along with a few necessary compromises -- like slavery flags, cuts to funding for the ACA, allowing pesticide dumping, and insane cuts to family planning clinics when condoms would help slow the spread of the disease -- Senate Majority Leader Mitch McConnell is shocked, shocked at the sudden outbreak of partisan obstructionism:

We have a public health crisis descending on our country ... Pregnant women all across America are looking at this with dismay, utter dismay, as we sit here in a partisan gridlock manufactured by the other side.

And then he slowly munched on a head of lettuce. Reid gave him hell, at least in the polite way Senators give each other hell:

“I don’t know what universe my friend is living in,” Mr. Reid said, referring to Mr. McConnell. “What does he think? Does he think we’re all stupid? The American people are dumb?”

That seems a rather silly question, Mr. Reid, given the Republican majorities in both houses. Of course they think we're stupid when we keep doing stuff like that. The Zika funding bill is certainly not going to have any action before the Fourth of July break, and possibly not even after that. But after not taking action on Zika for four months, Republicans sure have gotten some great talking points out of Democrats' refusal to go along with the "improvements" to the bill. Sen. John Barrasso of Wyoming knows exactly who the bad guys are: The meanies who aren't willing to accept a little bit of extra water pollution from pesticides:

“The Democrats are more focused on protecting the mosquito than they are protecting people,” he said.

Thank goodness he's above cheap partisan points in the face of a serious disease outbreak. We're looking forward to seeing what other important compromises Republicans can throw in when the bill eventually moves forward again. Maybe requiring CDC researchers to pledge allegiance to the flag each morning would help instill in them a sense of how important this is.