Republicans Protecting The Little Guy, And By Little Guy We Mean 'Equifax' 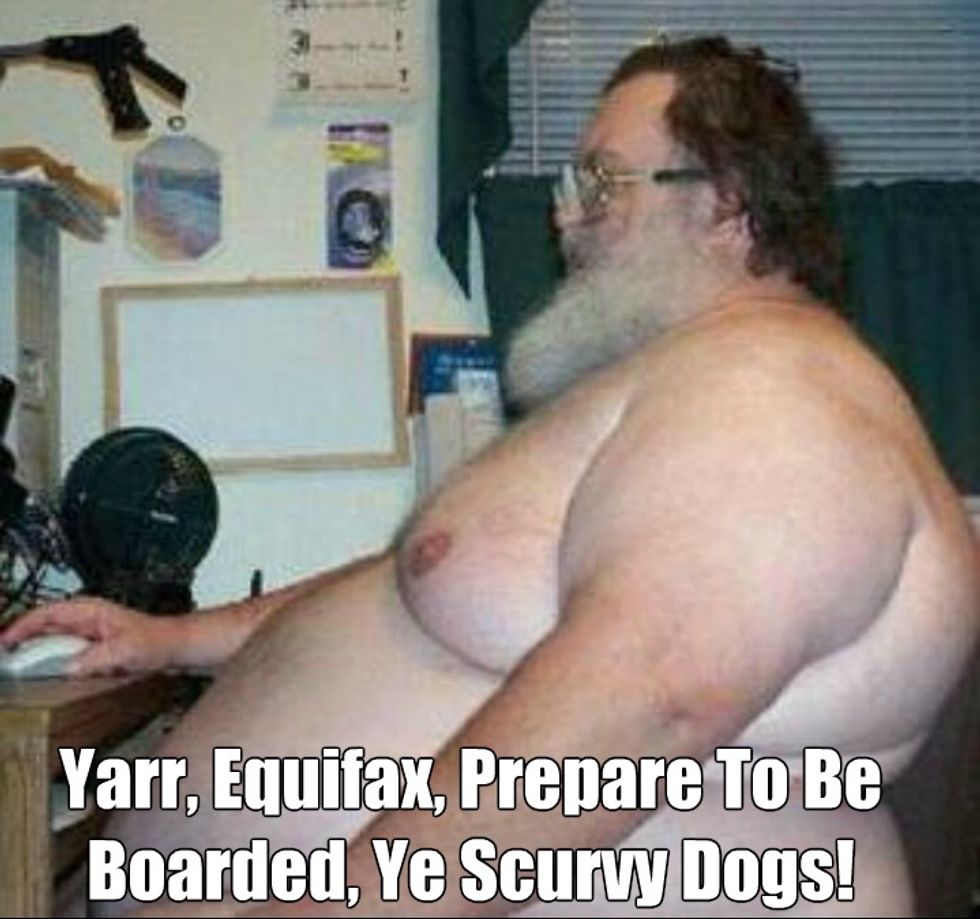 Consider this our concession to Talk Like A Pirate Day

So by now, you've prolly heard that Equifax wasn't just hacked the one time in July, which we finally learned about in early September. Nope, turns out there was an earlier data breach this year, too, as a very corporate spokesperson very corporately told CNBC:

"Earlier this year, during the 2016 tax season, Equifax experienced a security incident involving a payroll-related service," an Equifax spokeswoman told CNBC in an email. "The incident was reported to customers, affected individuals and regulators. This incident was also covered in the media. The March event reported by Bloomberg is not related to the criminal hacking that was discovered on July 29."

And the data that was hacked in July, exposing huge amounts of customers' personal information, had no effect on other customer data from that March hack, so doesn't everyone feel a lot safer?

So in the context of two major data breaches in a matter of months at one of the three big credit rating agencies, we should all feel super confident about this story by financial columnist David Lazarus in the Los Angeles Times: Even with all the indications that your private information isn't especially safe, Republicans in Congress are racing to make credit agencies less accountable for their screwups (or intentional wrongdoing) by further deregulating them. Hooray! It will create jobs, maybe! Or at least (more) obscene profits.

Bills are pending in Congress to limit class-action damages for violations of the Fair Credit Reporting Act and to give credit agencies more latitude in profiting from identity theft protection products.

The legislation is part of sweeping efforts by Republican lawmakers to reduce oversight of banks and other financial-services firms, and to cripple or eliminate the Consumer Financial Protection Bureau, which has notched a successful track record of holding industry players accountable for unfair and illegal practices.

On the other hand, Democrats introduced a bill last Friday called the "Freedom from Equifax Exploitation Act," which would allow the CFPB to further regulate credit agencies and would allow consumers to freeze or unfreeze their credit files with no fee. This is because Democrats and Republicans are exactly the same.

Chi Chi Wu, an attorney with the National Consumer Law Center, hopes that if nothing else, the EquiHacks will open consumers' eyes to the real nature of the priorities of the three big national credit agencies, Equifax, Experian and TransUnion:

Consumers are not customers of these companies — they’re commodities [...] We have no say over what they do with our data.

As luck would have it, the House Financial Services Committee held hearings on the bills to loosen credit agency regulations on the very day that the news broke about the July break-ins at Equifax. There may not be a God, but Yr Wonkette believes fully in trickster spirits who pull crap like that.

In other news Monday, Lazarus notes, the federal government is looking into whether some really well-timed sales of Equifax stock by Equifax execs -- just before the news of the data breach broke -- might have violated insider trading laws. COULD BE!

And what would these lovely bills to ease the regulatory burden on credit agencies actually do? All sorts of things to make sure big companies don't suffer too much if you get ripped off, because Prosperity:

Loudermilk said Friday that his bill “is aimed at curbing frivolous class action lawsuits against businesses under the Fair Credit Reporting Act,” which contains many of the rules for credit agencies.

When he introduced the legislation in May, he said that “a small technical error, turned into a lawsuit, can affect everyone in a business, including employees, customers and vendors.”

What Loudermilk ignores, however, is that a “small technical error” by a credit agency can have disastrous consequences for consumers — particularly if the agency, as is so often the case, shows little interest in fixing things.

For example, there's the incompetent handling of the credit record of an Oregon woman, Julie Miller, whose information Equifax somehow merged with the file of a completely different person with the same name, but a different Social Security number that shared some digits. Miller tried from 2009 to 2011 to get Equifax to fix the errors, was unable to get anywhere, and eventually sued the company:

In 2013, a jury awarded Miller $180,000 in compensatory damages and a whopping $18.4 million in punitive damages, reflecting a sense among outraged jurors that Equifax just couldn’t be bothered to help a distressed consumer.

Well that's not fair at all, since jurors always feel sorry for someone screwed over by a big unresponsive corporation. The punitive damages were reduced by the judge to $1.62 million, which was more in line with similar cases, but the judge definitely agreed that Equifax "engaged in reprehensible conduct."

Loudermilk's bill will make such fuckups far more profitable for companies like Equifax: The most Miller would have gotten had it been in effect was the $180,000 compensation, and no punitive damages because why are we trying to punish companies for honestly refusing to fix their own mistakes?

The other GOP bill making its way through the House would weaken the existing Credit Repair Organizations Act, which prevents "credit repair" outfits from making exaggerated claims of how they can improve consumers' credit scores. A measure sponsored by California Rep. Ed Royce would exempt credit agencies from the act and allow them to charge customers up front to maybe fix their credit. It would also let them

keep “reasonable value for services” even if the consumer cancels within three days.

In other words, a credit agency could still pocket a consumer’s cash just for having opened a file in that person’s name.

The goal here, says the National Consumer Law Center’s Wu, is to let credit agencies keep making money off consumers regardless of whether they actually help them. Heck, isn't making money what America's all about? If we require credit agencies to actually deal responsibly with our data, maybe they'd just all shut down and then nobody'd have a credit rating and the economy would crash. We should probably give them whatever they want, just so they won't hurt us. More.

Yr Wonkette is supported by reader donations. Click here! Your financial information is safe with us, because if you can't trust a guy in a baked potato with a giant pat of butter on his head, who can you trust?