Republicans To Fix Healthcare By Finding Solution To Fix It. You'll Really Want To Read This One. 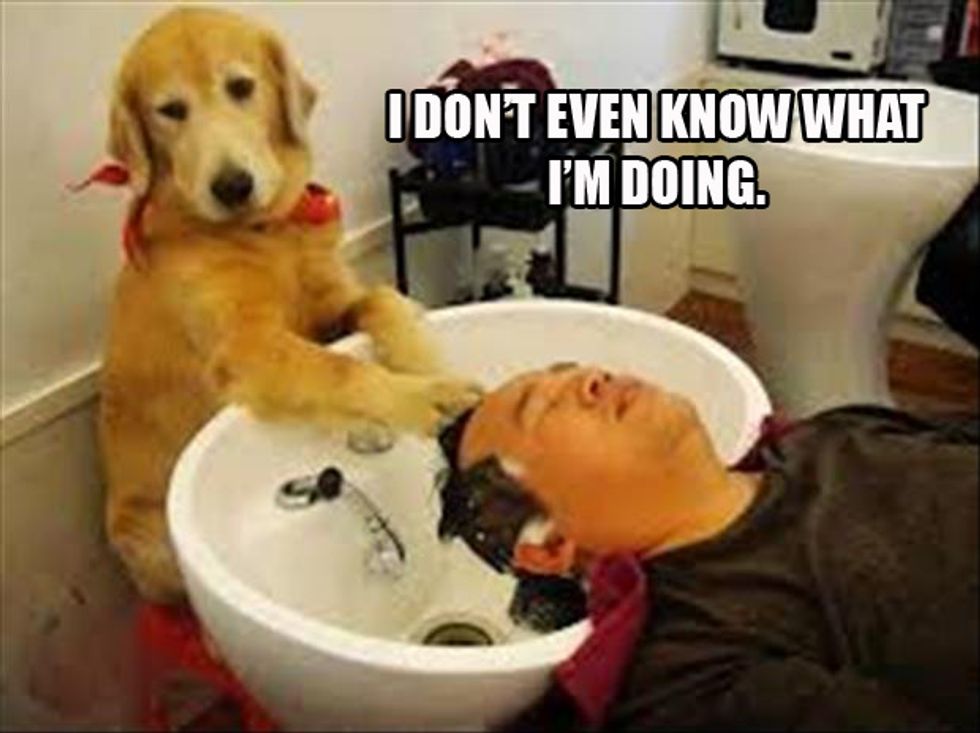 Now that you're all lathered up, you should run away and shake yourself off all over the clean towels

Some terrific logic going on inside Republican senators' heads, as several intrepid reporters at Vox discovered when they set themselves what seemed like a simple enough task: We all know what R's don't like about the Affordable Care Act (Barack Obama, poor people, tyranny), so why not ask some Senate Republicans to lay out the positive case for whatever eldritch horror their colleagues are hatching in secret? Once there's a Senate version of Obamacare repeal, why should Americans be for it? Turns out that was a really tough question! We won't try to catalogue all the evasions, pivots, and circular logic, but we gotta say it's fascinating to see members of the World's Greatest Deliberative Body try to sell the plan that doesn't exist yet, or even to define what they think it should do. Now, to be "fair," most of the senators Vox talked to aren't among the 13 men -- no girls allowed -- who are working on the bill in secret. But the ones who are working on it had no details, either.

The most incoherent answer, as you might expect, came from John McCain, who may have been up late watching baseball again. When asked "what are the big problems this bill is trying to solve?" McCain went Partial Palin: "Almost all of them. They’re trying to get to 51 votes." He never really got much more specific, because there's no bill yet, but it's going to solve almost all the problems, the chief one being finding 50 votes plus Mike Pence. So in missing the point of the question, McCain may have given the most honest answer of anyone.

Chuck Grassley, who is in on the negotiations, explained the big goal for this legislation is "bringing certainty to the insurance market," because insurance companies are so uncertain about what the market will look like now. Of course, the reason the individual market is so uncertain is that Republicans keep threatening to blow it up altogether, which you have to admit is less than a recipe for stability. Asked what he meant by bringing certainty to the market, Grassley invited reporter Jeff Stein to join the Circle of Logic:

Grassley: Well, [insurance companies] can't even file. They have to check the rates real high if they don't know what the government policy is. And so the certainty is that passing a bill gives the health insurance companies certainty.

Stein Wouldn't not passing a bill also do that?

Grassley: No, it ... well, yeah — it gives them certainty that you'll have a lot higher rates than if you pass the bill.

And the reason the insurance premiums would be higher if the Senate doesn't pass its bill? Uncertainty, of course! We sure are glad we could help you kids learn what a tautology is today! And now, a mandatory word from Yr Editrix, who started all this by asking if these senators were "begging the question" or doing some other rhetoric crime:

Dogs are good at begging but bad at rhetoric, is what we are saying. They are worse at rhetoric than Republican senators, even. But much nicer to scritch behind the ears and have lying on your feet on a cold day. And a dog wouldn't even think of kicking tens of millions of people off healthcare.

Arkansas Senator John Boozman wants to bring down premiums and deductibles, although he's a little unclear on how exactly the Senate is going to do that. He knows Obamacare is unsustainable (which would be news to the Congressional Budget Office, as even the Washington Times reported), but if it were, how would the Senate fix that? Outlook cloudy, please ask again:

Stein I’m curious why you believe this bill will fix that problem. What’s the mechanism for fixing it?

Boozman: It’s working together and coming up with a bill that does do that. Because we’re in a situation with Obamacare that, again, we don’t have a sustainable product.

We will fix the problem by working together and fixing it. And in the spring, the garden will grow, as long as the roots are intact. Incredibly, Boozman also explains that's the same solution to another big problem with the ACA: Obamacare didn't have any incentives to keep medical costs down (also not true -- the annual increase in medical costs per capita has been lower since the ACA went into effect, while covering more people), the Republican plan will definitely drive down medical costs. How?

Again, that’s what we’re trying to work through. Identifying the solutions that will work.

They're going to fix it by finding solutions. Solutions that work. Solutions that fix it. And bring down rising premiums (which are actually rising less under the ACA than they were in the past).

More tautologies from Mississippi's Roger Wicker, who insists the Republican plan will allow more freedom by eliminating the ACA's mandate to buy insurance (and replace it with huge premium increases for anyone who's uninsured for two months). Also, said Wicker, it'll "rescue a system that is teetering on the brink." And how will it rescue that system that's teetering on the brink? (Which, again, it is not -- though Rs are trying to push it over.)

Wicker: It’s teetering because the exchanges are failing. They’re not acting as they were intended. And as a result, insurers are dropping out. There are counties with no option.

Stein I want to understand why you think the bill will help the marketplaces.

Wicker: For the reasons I’m giving you. A very comprehensive answer, I think.

(Yes, we've only partly quoted the dialogue. The other parts of his answer definitely did not include any reasons, either.)

Of the sample of eight Senators, only Alaska's Lisa Murkowski really seemed to offer any definite examples of the effects the Republican plan would have -- unfortunately, they were examples of how the House plan would make things worse than they are now, which helped her explain why she can't vote for that if it's not changed in the Senate. She wants lower costs and increased access to healthcare:

Not surprisingly, Sen. Murkowski says she's rather "frustrated" by her colleagues' lack of specifics. But she needn't worry. They're going to work hard and come up with a plan that will be a plan, and that will solve the ACA's problems by presenting solutions, and most importantly, will fix a fifth of the economy through the magic of getting 51 votes.

Yr Wonkette is supported by reader donations, which is great because readers support us! Please give us money by clicking the "Donate" linky below. This is not a rhetorical question.