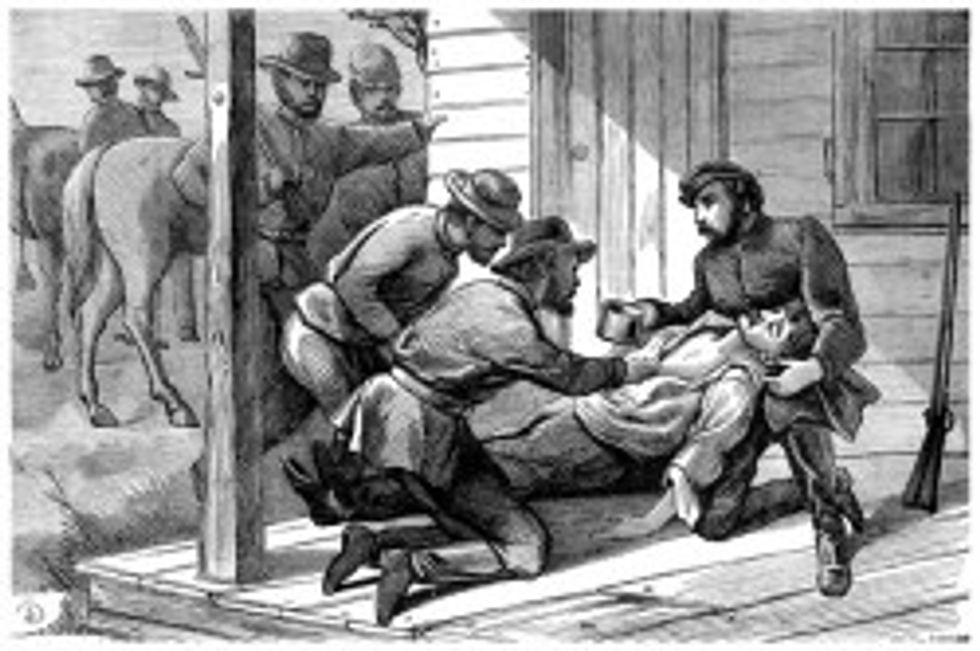 It was a Meltdown in Metropolis, a Rumble in the Concrete Jungle on Monday night whenCharlie Rose hosted Paul Krugman and Joe Scarborough for a battle royale for the crown of World’s Greatest Economics Expert Guy! Who would win? Would it be the avuncular and learned Dr. Krugman, an Ivy League professor who holds an actual Nobel Prize for Economics, or would it be the failed Congressman from America’s Dingus who most people know these days as “that guy on morning TV whose facial expression makes him look like nothing so much as an angry pit bull that was just neutered”? Your Wonket could not watch this death match live last night, so we will retroactively live-bloog it this afternoon because we woke up feeling dangerously optimistic about the world.

First, a little background: recently Dr. Krugman, for reasons he will one day have to explain to his Maker (or maybe Rip Torn), has been appearing on “Morning Joe” to straight up drop some economics knowledge on Joe Scarborough and the human-shaped nullities who populate the show’s set, slurping down “Morning Joe”-branded Starbucks and forever mumbling about how both President Obama and the traffic on their commutes in from Connecticut in their chauffeured Lincoln Town Cars is always terrible. In an appearance last Monday, Krugman tried to explain to these vacuums of negative space why Keynesian economics has been the way to go the last four years after the Financial Crisis That Ate The World, and JoeSca was all, “Naw, mang, Keynesian economics is for commies!” JoeSca assured us that he talks “all the time” to “people” who know what’s what, and so he, JoeSca, knows that Paul Krugman is a dangerous extremist radical far out of the mainstream. MSNBC, your “liberal” cable news channel.

So now, the rematch. The debate’s drinking game: take a drink for every minute you are not drunk. Here we go!

9:32 A.M. – Paul Krugman is not wearing his Nobel Prize for Economics around his neck, Flavor Flav-style. We haz disappoint.

9:36 A.M. – JoeSca starts off by digging back into Krugman’s writing from the mid-1990s when he was saying that it was irresponsible to pile up lots of debt. Right! And by the end of that decade we had stopped doing that and the budget had a surplus we could use to start paying down the debt. It’s a different time now. We will make a prediction: Joe Scarborough will spend the next hour throwing out gotchas he had his staff dig up from Krugman's old work while making no effort to learn a damn thing about Keynesian economic theory, because that is how one “debates” on Scarborough’s planet. We already rue our decision to watch this.

9:38 A.M. - Krugman counters effectively by saying we missed the window to do what he was recommending back then. JoeSca asks “What has changed since 1997?” Um…

9:39 A.M. – Buffering already. Stupid AT&T Uverse. While we wait, one more note: on his show last week, JoeSca told Dr. Krugman that his colleague at Princeton, Alan Blinder, disagreed with Krugman’s views. Uh-oh, it’s a #WAR in the Princeton Economics Department! Except, no. Here is Dr. Blinder’s explanation of why JoeSca did not know what the hell he was talking about. Everyone slap your cheeks in feigned shock, Jack Benny-style, and then drink.

9:43 A.M. – Krugman: “Why don’t we try to argue the substance?” We would like that! Unfortunately your opponent is Joe Scarborough.

9:46 A.M. – Scarborough is shocked, shocked to learn that people are saying the deficit is the number-one fiscal problem in the country. “Who is saying that?” he asks with his confused squint, like a puppy who can’t figure out why he doesn’t deserve a treat just for being adorable. Charlie Rose – oh look, he’s alive! – wants to know what it would take for Krugman to agree that we should do something about the debt now.

9:52 A.M. – Interestingly, Krugman wrote on his blog immediately after the taping last night that he had blown it by being tired, cranky, and unprepared. He just described our entire adulthood.

9:58 A.M. – JoeSca is saying something about Eisenhower investing in infrastructure. Joe wants more spending and investment! He’s a Keynesian! Krugman points out that the political will right now in Washington is to not spend any money on anything, ever. Scarborough: the stimulus bill was both good and sucked, for reasons that probably make sense to him but to anyone with functioning brain cells sound contradictory and confusing. We think he’s just trying to say that he thinks the president is kind of a dick.

We haven’t watched Charlie Rose in years. Is he always this worthless at keeping his guests on topic and not talking over each other?

10:14 A.M. – Scarborough just will not shut the fuck up about what Krugman wrote ten or fifteen years ago. He does not seem to understand that the good doctor is an academic whose views might change as he accumulates more evidence or his theories come up against real-world events and must be adjusted. Scarborough sees everything through the same partisan lens that made him a good foot soldier in the Gingrich revolution back in the '90s and makes him think debates are won not by presenting evidence to support a view, but by how hard you can embarrass the other guy.

10:23 A.M. – Krugman going on about the Chicken Littles always saying something bad could happen ANY DAY NOW. We’re getting this now: the problem is that Joe Scarborough and his buddies are total pussies. About everything. Ever. At least Charlie Rose has gotten better about letting each of them make his points.

10:28 A.M. – Scarborough saying how much worse the GOP treated Clinton in the '90s but yet they all still got some things done. Why can’t that happen now? We don’t know, Joe! Ask your fucking party!

10:31 A.M. – Charlie Rose quotes Thomas Friedman to Krugman about how the president should actually lay out a three-point plan for infrastructure investment (specifically “broadband high-speed capabilities” which is what Thomas Friedman is always fapping over) and long-term debt reduction. “Shouldn’t we expect the president to lay out that kind of plan so that it might force the Republicans to respond and deal with these issues…” Krugman: “To a large extent he has done that.” Krugman has a look that says he can’t believe he has to actually tell Charlie this. Has Charlie been unconscious since 2009? It’s possible! Charlie then mansplains to Paul how the president would have a massive press conference AT NIGHT to lay this out, the public has the impression he has not done this, Scarborough piles on and OH FUCK IT CHARLIE ROSE IS ONE OF THOSE “BOTH SIDES” GUYS. “Bully pulpit.” Drink!

Krugman, by the way, looks positively stunned that he has allowed himself to be pulled into this pile of horseshit. We know how he feels.

10:42 A.M. – How can the president operate in this environment? “Eisenhower did it!” Eisenhower! Cock-punch yourselves twenty times and then drink!

10:43 A.M. – We’re out of booze and going for the medical marijuana (hooray, California!). There goes Tuesday.

10:47 A.M. – Lot of blah blah about how much debt Bush and Obama have piled on over the last decade. Scarborough: We have a spending problem! Krugman: We have a collapse of revenue problem! Yes Joe, there was that whole economic collapse thingy you might have heard about. Perhaps you saw some unemployed people camping on the side of the highway from the window of your chauffeured Town Car as you were driven in from Connecticut to the Morning Joe studio sometime in the last four years?

10:50 A.M. – Charlie Rose never actually leaves this table. His guests go home, his crew turns off the lights, and he goes into Sleep mode in his chair until it is time to tape the next show. That is why he is a fucking idiot.

10:52 A.M. – Closing statements. Has Joe Scarborough changed his mind? No, because he is impervious to anything anyone says that does not conform to what his wealthy buddies talk about over $300 bottles of wine at high-end restaurants. He gets mad at Krugman for muttering “wow” at something. “You and Al Gore really need to talk because you take cheap shots when someone doesn’t agree with you…” Oh ho, Al Gore! Good to see Joe has gotten out of that right-wing bubble sometime in the last thirteen years.

10:55 A.M. – Well that was horrible and we are poorer for having watched it. Good day, Wonket!