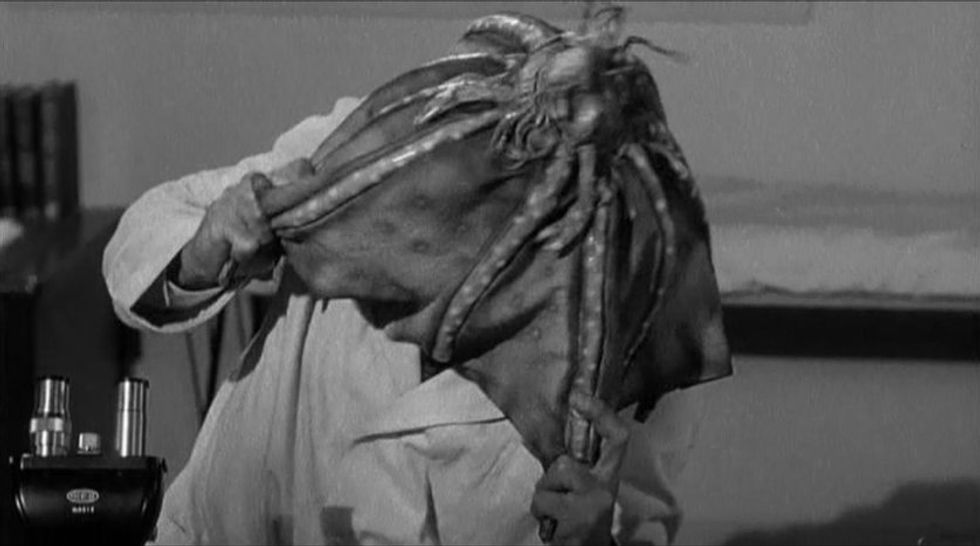 As everyone knows, the monsters in horror movies never die until the credits roll, and even then there's always the chance of a sequel. That seems to be the fate of the shambling misbegotten hellspawn that is the Republican attempt to kill Obamacare, which the mad scientists in the White House and Congress are reanimating yet again this week in the vain hope of getting one legislative win for the Trump administration in time for his First 100 Days.

Oh, sure, you thought this thing was dead, and embarrassingly so, when it had so little support it was pulled before even getting an initial vote in the House. Yes, it was -- but you thought Jason was dead at the end of the first Friday the 13th. There were rumors a few weeks back that the unholy abomination was moving again, but nothing came of it then, either. And now, with the arbitrary, meaningless "100 Days" mark coming, Trump and his gibbering Igors are back in the lab trying to see if they can piece together a few more choice cuts from corpses to see if it will live. Expect this creature to keep coming back, even when it's not even worth a direct-to-video release.

So, what rough beast is slouching toward the House floor this time, maybe? Like a couple weeks ago, there's not even a draft bill yet, just a bunch of bullet points. But this time it'll be even crueler than the first try, which might turn out to be popular with the House Freedom Caucus, but would make the possible legislation even less able to make it through the Senate. This version would keep parts of the incredibly unpopular American Health Care Act, like switching from premium subsidies to tax credits to help people cover some of their insurance costs, and instead of an "individual mandate," it would goad consumers to buy health insurance by allowing companies to raise their rates if they go without insurance for a period of time. Ah, but now there are some additional horrors sewn in to appeal to legislatures who considered the first go-around too liberal:

It allows states to seek a waiver to get rid of the Affordable Care Act’s prohibition on charging higher premiums to people with preexisting conditions, on the condition that states set up or participate in high-risk pools that would help cover any of those people who lose insurance. It would also restore to the GOP bill the ACA’s requirement that insurers cover Essential Health Benefits (EHBs) — such as doctor’s and emergency room visits and maternity care — but allow states to seek waivers from them.

Paul Ryan, Donald Trump Promise If You Like Your Cancer, You Can Keep It

The idea is to have a basic outline that looks like the first terrible ACA replacement, but that would allow red states to opt out of the stuff wingnuts really hate, like minimal standards of care or requiring insurance companies to cover preexisting conditions. That way, Republican "moderates" could say they'd voted for a bill that keeps some aspects of universal coverage -- not real coverage, but "access" to coverage -- while hardliners could say they'd finally slain the regulatory burdens that make ACA plans more expensive than "junk insurance," so in states that opt out, people will be able to buy really cheap plans that don't actually cover much of anything. Those plans would have the name "insurance" on them, and would be really inexpensive, at least until policy holders actually get sick and have to pay out-of-pocket to get medical care.

The really pernicious thing about this proposal is that by allowing states to opt out of prohibitions on insurance companies raising rates for preexisting conditions -- the technical term is "community rating" -- would end up leaving lots of people unable to afford insurance at all. Here's a lovely chart from the Center for American Progress showing how much premiums could go up for patients with various preexisting conditions. Get ready to hurl something, possibly your breakfast, across the room:

So sure, you could still buy insurance if, say, you've had a heart attack. All you need to do is to cough up an extra $57,000 a year. Oh, that's more than a year's salary? Sucks to be you. You should have taken better care of yourself. Or, as in the case of a friend we know, you shouldn't have let your anesthesiologist let your blood pressure drop suddenly after gallbladder surgery, resulting in an infarction. Take more responsibility for yourself while you're completely sedated, will you? (Friend is fine. Turns out a hospital recovery room is one of the better places to have a coronary.)

Oh, are you one of the 80 percent of American women who have given or will give birth? That might be a problem for you to the tune of an extra $17,000 a year.

Yes, yes, these are estimates, not actually part of the law, but based on actuarial data. But they're a pretty good picture of what could happen if the ACA's requirement that all insurance plans provide real health insurance is swapped out for a patchwork system where the young and healthy can pay almost nothing for insurance, and everyone else can hope for the best.

Larry Levitt of the Kaiser Family Foundation explains why allowing states to opt out of protections for people with preexisting conditions would almost inevitably lead to lots of Americans being priced out of insurance:

These figures show why a guarantee of coverage without community rating offers essentially no protection for people with pre-existing conditions [...] No insurance company will want to cover people with expensive health conditions if they don’t have to, so they will set premiums to make sure the coverage is out of reach. Health care costs are highly concentrated among a small number of people who are sick, and they would find it impossible to get affordable coverage.

Yeah, but isn't that the magic of the marketplace at work? If you can't afford healthcare, you die, and the system works (and no, those "high risk pools" won't be a solution). The one good thing about this horrorshow is that even in the unlikely event that it passes the House -- remember, "moderates" can say the basic framework keeps protections for people with preexisting conditions, though red states can waive them -- it would almost certainly be doomed in the Senate. If somehow it did pass and get signed into law, the backlash would be enormous once families started finding themselves unable to get insurance. It might actually make health insurance worse than it was before the ACA.

But the contents of the bill don't matter so much to Donald Trump -- he just wants the House to vote for something he can call a win. And he'd really like to hand out those huge tax cuts to the rich that elimination of the ACA's taxes would entail. He may have promised to make sure no one would be left to die on the street, but if the House would just give him the chance to say "I won," he'd come out in favor of the Let Granny Die On The Street Act.

And so, even though it's a terrible idea and Trump probably can't get the votes anyway, he's hoping for some legislation to get written over the weekend and introduced for a House vote before next Friday. We've seen this movie before, and it ought to go about as well as the mayor of Amity Island opening the beaches for the Fourth of July, except we won't even have the first-reel thrill of the poor doomed skinny-dipper bouncing down the beach.

No way are those shark bites going to be covered.

Yr Wonkette is supported by reader donations, just like your health insurance will be if this clusterfuck passes. While you still have some Ameros to spare, consider helping us out by clicking the "Donate" clicky below!