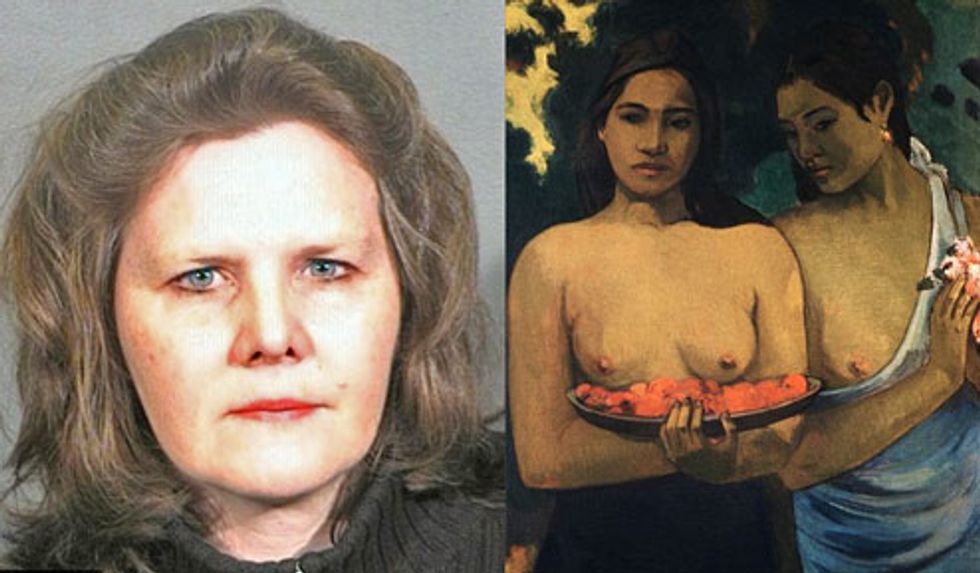 The lunatic whoattacked the Paul Gauguin masterpiece "Two Tahitian Women" screamed about her hatred of lesbians as she impotently pounded on the clear plastic cover protecting the post-impressionist portrait of a pair of topless Maori gals. The suspect, 53-year-old Susan Burns, screamed "This is very homosexual!" as she attacked the painting on exhibit at Washington's National Gallery of Art. And then she claimed she has a radio in her head and works for the CIA.

The Daily Mail fills in the details left out by our national embarrassment, the Washington Post:

According to a criminal complaint filed in Washington, D.C. Superior Court, Burns said that the painting is "'very homosexual. I was trying to remove it. I think it should be burned ... I am from the American CIA and I have a radio in my head. I am going to kill you."

And who saved the beloved French artwork from the white middle-aged violent homophobic wingnut? A brave social worker visiting the Washington museum from the Bronx. This is the complete story of America in 2011.

The painting, which really can't be valued properly on the capitalistic scale because it belongs in a museum, is nonetheless said to be worth $80 million. It was undamaged in the assault.

Susan Burns pleaded not guilty in court on Saturday. She will be put on the GOP 2012 presidential ticket as either president or vice president, depending on how boring the other candidate is. [Daily Mail]

If you are in Washington, please do go see this exhibit -- and please don't attack the art. Gauguin's paintings in real life are a completely different experience than seeing them in art books or on a computer screen. And because the exhibition is at one of America's great national museums for the people of America, the National Gallery of Art, you need no extra passes or tickets to see these phenomenal paintings. Go!