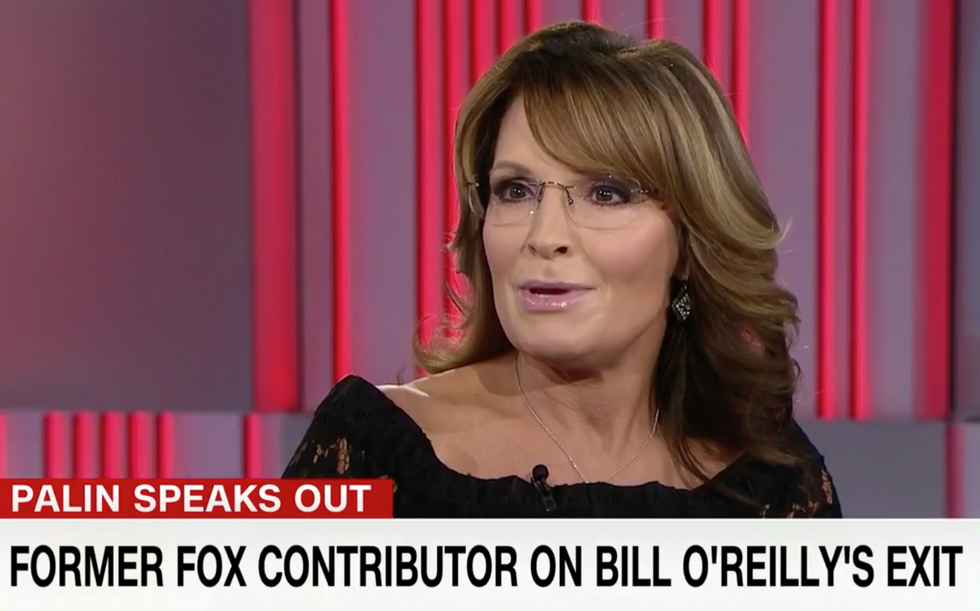 Thursday was a real big day for Sarah Palin. After recovering from Wednesday's whirlwind tour of the White House with Ted Nugent and Kid Rock, she swung by CNN for an interview with Jake Tapper. Although she was there to discuss her field trip, the subject soon turned to the disturbing sexual conduct of a man with a lot of power. No, not about her buddy Ted Nugent's song about gang raping a 13-year-old with a police officer or the fact that Courtney Love has accused him of raping her when she was 12, or the whole "adopting a teenager in order to have sex with her" thing. And not about Donald Trump's predilection towards grabbing women by the pussy either. But rather about Bill O'Reilly.

Shockingly enough, the first thing that came out of her mouth was actually quite reasonable:

"Corporate culture there obviously has to change. Women don't deserve it, they should not ever have to put up with any kind of intimidating workspace."

But perhaps she should have just ended it there. Because she then followed that up by implying that the women Bill O'Reilly harassed were greedy moral failures who stuck around for "paychecks" instead of immediately walking out in a huff.

“If a woman believes that she is being intimidated and harassed, she needs to stand up and do something about it, not stick around for a paycheck for years and years and years and then after the fact complain about what she went through.”

In a perfect world, that would be lovely. Unfortunately, we don't live in a perfect world and not everyone is able to just go around quitting every shitty job they have. Not everyone can go and quit their job as Governor of Alaska knowing that they will still have money, that they can easily make money by having their own TLC reality show, or just form a superPAC to keep them in Taco Bell. That is not reality for most people.

And yes. Women do stay in jobs where they are sexually harassed, because they need the paycheck. A paycheck is a pretty big deal to most people who are not Sarah Palin, and sometimes, yes, women weigh the problem of dealing with a sexual harassment situation versus losing their jobs and not having food to eat, and sometimes pick the former. And them doing that doesn't mean that what the sexual harasser did was in any way less wrong -- forcing people to choose between dealing with that and surviving is what is wrong.

When women don't report sexual harassment, it's not because they don't care and are fine with it so long as they still get a paycheck. It's because they are scared that no one will believe them, they are scared of losing their jobs, they are scared of developing a "reputation" in their industry of being "trouble." Because the unfortunate truth is that women know that this is something that is often held against them, rather than the other way around.

Contrary to the popular narrative that cruel women frequently accuse powerful men in order to attain fame and money for themselves, this is actually not a thing that frequently works out too well in that area. In fact, that narrative itself often keeps women from reporting these kinds of things, for fear of being seen that way.

According to IMDB, Andrea Mackris -- she of "the falafel thing" -- has not had a producer credit since the Bill O'Reilly show.

That aside, it appears as though Sarah is under the impression that all these women came out at once, years after they'd even worked for O'Reilly. They didn't. Rather than a Bill Cosby situation where they all began coming out of the woodwork at once, what did Bill O'Reilly in was the New York Times reporting on his history of settled sexual harassment lawsuits dating back to 2002. Both Gretchen Carlson and Andrea Mackris went to human resources to complain as well, to no avail.

Which brings us to Sarah's next point!

“As a strong woman, I say we should feel more empowered than that and we should take a stand and get out of the place or blow the whistle on whoever is the perpetrator.”

Fox, if not all of America (as a result of "the falafel thing") was well aware of O'Reilly's tendency towards sexual harassment. They kept him on, and kept allowing him to do this and paying off his lawsuits, because he made them money. There were not only whistleblowers over the years, there were recorded transcripts.

So perhaps the problem is not women not being strong women like Sarah Palin, so much as the fact that they are ignored and dismissed. Perhaps at least part of the problem is people like Strong Woman Sarah Palin who appeared on the O'Reilly Factor dozens of times since her 2008 Vice Presidential run, despite Andrea Mackris's lawsuit having been brought in 2004. Really, anyone who appeared on his show following that lawsuit -- including President Obama, frankly -- contributed to giving him the power and prestige that made him so much of an asset that Fox was willing to overlook the whole, well, falafel thing.

(Not that we're not all complicit in these things to some degree. Roman Polanski is a rapist and I still really love "Chinatown" and "Rosemary's Baby." I love music produced by Phil Spector. Hell, I even genuinely like a few Ted Nugent songs. The fact that it's near impossible to avoid things created by abusive men is, well, a problem.)

Trump reportedly used his power to leer at women of legal age at the Miss USA pageant too.

America continued watching Bill O'Reilly after Andrea Mackris's lawsuit. America elected a president who bragged about grabbing women by the pussy, kissing them without their consent, and spying on teenage girls in locker rooms. How can anyone criticize women for not being "strong" enough to take on their harassers when we aren't "strong" enough to create a culture in which that kind of harassment is unacceptable? If you blow a whistle in an office where everyone's got their ears plugged up, does it still make a sound?