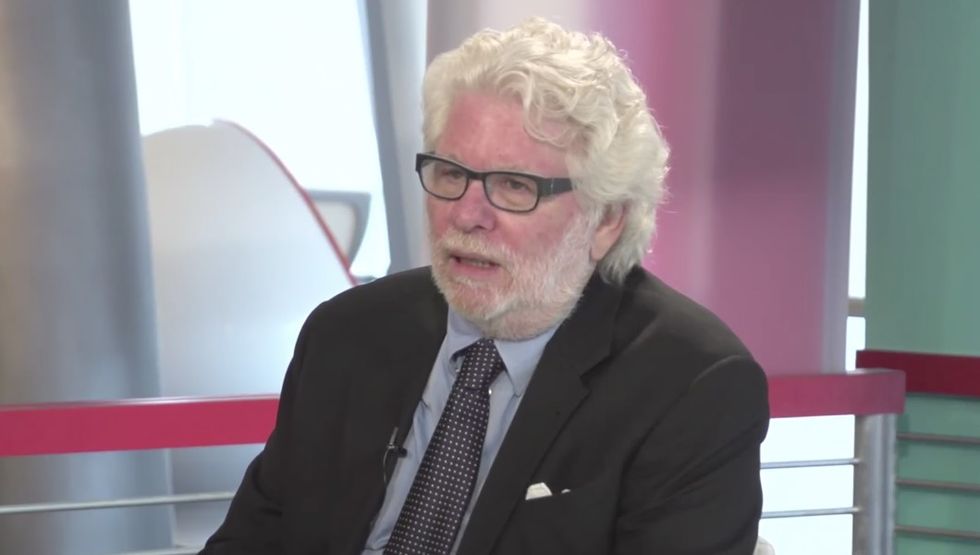 In 1986, in a column the Washington Post later had to apologize for, opinion writer Richard Cohen wrote that it was perfectly reasonable for jewelry stores to refuse entry to young black men out of fear of crime. In 2013, also in a Washington Post column, Cohen explained that it was perfectly "understandable" for George Zimmerman to be suspicious of Trayvon Martin, on account of how young black men (especially in hoodies!) commit so much crime.

On Monday, Cohen published another opinion column -- this time, an assertion that we all have a "solemn obligation to treat people as individuals, not primarily as members of a sex or race."

What? Could it be that there has been a sudden change in Cohen's beliefs? Was he renouncing his past sentiments about how very reasonable it is to be so afraid of young black men that you bar them from your jewelry store or kill them? Was he suddenly suggesting that, instead of assuming that these men are criminally inclined, as a group, you should think of them all as individuals?

Ha! No. No he was not. The person he would like you all to think of as an individual is none other than Richard Cohen. Well, not just Richard Cohen. Richard Cohen and all the white men out there feeling that "the deck is suddenly stacked against them." The poor dears.

The column is actually, for real, titled "Privilege is real. But being a white man shouldn’t disqualify me." What Cohen feels he is being "disqualified" from is a mystery! He has been employed as a Washington Post opinion columnist since 1976, which is a rather prestigious job that probably lots of people would like to have.

In the article, Cohen first acknowledges that he knows that things have not always been so easy for white women and people of color. Why, he himself worked at a place where his boss would not hire black people!

My first real job was with the New York office of a national insurance company. Sexual harassment was a problem, for sure. But the term did not yet exist and the problem was not formally recognized.

We had no acknowledged diversity problem, either. In fact, we simply had no diversity. African Americans, Hispanics — you name it: None. Our office was exclusively white and not by accident. When I asked my boss why we had no black employees, he told me directly that it was his policy not to hire any.

Unfortunately for Cohen, sexual harassment was a recognized problem in 1998 when he propositioned an editorial aide for casual sex and then gave her the silent treatment for several weeks after she turned him down. Though the Washington Post deemed that a "hostile work environment" and not "sexual harassment," it seems fairly unlikely that this would fly today.

But, you know, he totally knows chicks have had a rough time of it, and he's even very sad that his own mother missed out on this revolution, on account of how she could have been President if she were just born later. His sister, too, is also pretty great.

When my mother died, I wrote that had she been born in a later era, she could have been president of the United States. Her competence was awesome and her drive was remarkable, but she was kept in her place by discrimination and tradition. Now her place has been taken by my sister. If President Trump is limited to one term, it will be because my sister has organized most of New England to oppose him.

"All this," he explained, "is by way of saying to women: I’m on your side." He likes us just fine, especially the ones he is related to. He even says that there are women out there doing journalism these days that he is glad he doesn't have to compete against!

But what Richard Cohen does not like is the fact that equality for women has felt like oppression to him.

But when I see op-eds, such as the one recently in the New York Times that states in the headline that the Metropolitan Museum of Art should not have appointed “yet another white, male director,” I recoil. That’s just another way of saying that white and male is a disqualification. Diversity in the workplace is an overdue goal, but it can amount to a quota by another name. Choose a woman because she’s a woman and you’ve eliminated a man because he’s a man.

Oh man, how very heartbreaking for him. Sure! Being a white man probably helped him in his career. Sure! He had no problem taking advantage of that when it was happening. Sure! At the end of the day, the Metropolitan Museum of Art still did in fact hire another white male director and no man was "eliminated because he was a man." And he totally appreciates diversity, but not if it means that some of the jobs that white men want are going to other people who are not white men.

That is not the only tale Cohen has to back this up. He has one that is far, far more harrowing.

Once I was passed over for a newsroom position I very much wanted. “We needed a woman,” an editor told me. I said nothing, although I seethed. In short order, I was made a columnist, so I didn’t even get a chance to cry. But the instant rush of utter unfairness lingers. The woman chosen was qualified, but her qualification had nothing to do with her sex. I was told she was just a needed statistic.

Richard Cohen was made a columnist in 1976, so this had to have occurred in or around that time. He personally notes, in this essay, that there were few women in journalism at this time. He also notes that he got what was perhaps a better job directly after that. But he's still mad that someone thought that -- just perhaps! -- it might be a good idea to hire a qualified woman for the job instead of him. You know, in 1976, when women were not getting as many opportunities in journalism. Four decades later, and "the instant rush of utter unfairness lingers."

Now, I could explain all about how diversity is a value in and of itself -- that by promoting a woman in 1976 instead of Richard Cohen, the paper was bringing in a much needed perspective rather than simply being, as he says, "a needed statistic." I could explain that Richard Cohen clearly knows that he had many opportunities that women did not have. I could explain that women who were working in 1976 could probably tell him a thing or two about "the instant rush of utter unfairness." I could even suggest that it is possible that the woman who got the job Cohen wanted was actually more qualified than he was, and his boss wanted to let him down easy. But we all know all of that already. So instead, I'm gonna introduce you to another fella.

This weekend, a man named John Corcoran wrote an essay for the BBC all about how he didn't learn to read or write for most of his adult life -- despite graduating from high school and college and being employed as a teacher for 17 years. He didn't tell anyone about this for years, and you know what? Good for him for being brave in coming out of the illiteracy closet, and for working to learn to read and write as an adult.

However. It says a lot about our society that he was even able to do this in the first place. What are the odds that he would have been able to pull that shit off if he were not a white guy? I'd say practically nil. We grant white men the assumption of competence in a way we do not grant it to anyone else. We don't think, "Wow! That guy took a job from someone -- possibly even a minority -- who would have been more qualified." We don't think of white men as "taking" jobs from anyone, because the jobs are theirs to begin with.

This assumption of competence is the reason Richard Cohen can feel so indignant about a woman getting a job he wanted, why he can feel so burned by people who thought that maybe it was unfair to hire yet another white male as the director of the Met. It's not that men are being "disqualified," it's that they are not the only ones who are qualified, and they are having trouble adjusting to that. Cohen cannot take a moment and think, "Oh, maybe there could have been someone who was not a white guy who was equally qualified to hold that position, so I could see how people might think it was weird that only white guys ever get that position."

The assumption is that a white man always gets a job because he truly is the most qualified, not because of any other factors.

Richard Cohen was not crying to be treated as an individual when he was getting jobs at places that did not hire black people. You do not see him complaining that legacy programs at colleges, which are a form of affirmative action for (mostly) white people, fail to treat students as individuals. You do not hear him walking back any of his comments about how very unnecessary it is to treat young black men as individuals. This deep passion for the individual, in Cohen and others who make this argument, seems only to ever extend to how white people, and white men in particular, ought to be treated. It's about pretending the world is fair and just, and that the only thing standing in the way of a true meritocracy are those daring to say it isn't.

But perhaps the next time he is feeling that instant rush of utter unfairness swell up inside him again, he should take a long look at his own career, at his own opportunities, at the things he didn't get fired for and probably should have, at the careers of all the men out there who had things just a little bit (or a lot!) easier and got to be just a little less competent because they were white men, consider that maybe the rest of us are not that interested in hearing about his experience with "unfairness," and then shut the fuck up forever.

Wonkette is fully funded by readers like you, and will never promote Richard Cohen to anything! Click here to tip us!