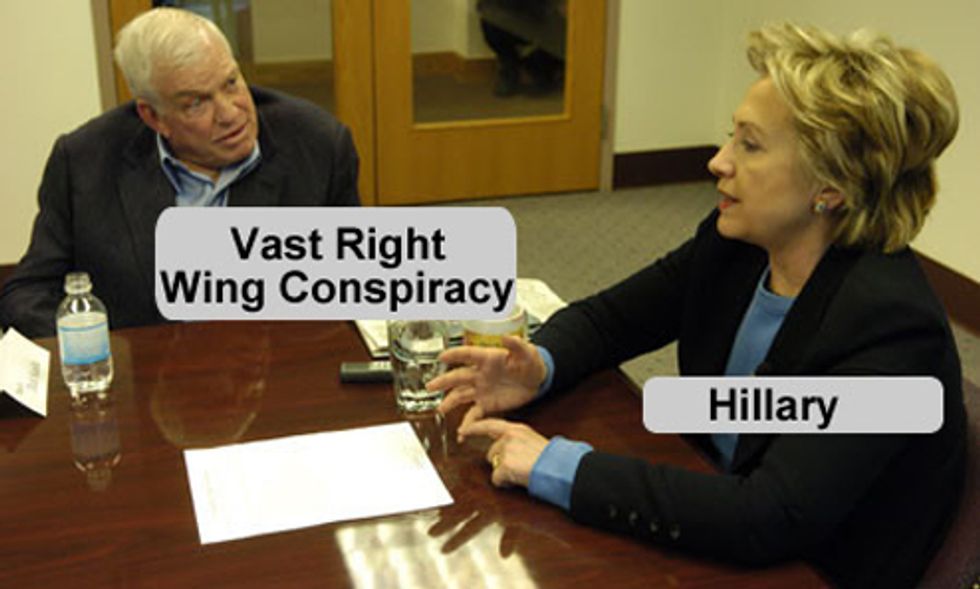 Richard Mellon Scaife, the guy who made a career of inheriting billions from his banking and oil industry forebears and then blowing it on hating the Clintons in the 1990s,died Friday of cancer. Scaife was a central contributor to rightwing attacks on the Clintons, and gave the American Spectator almost $2 million for the "Arkansas Project," which found pretty much nothing about Bill Clinton's non-crimes in the Whitewater real estate scandal, and which expanded into the wackaloon idea that the Clintons murdered Vince Foster. Scaife also was instrumental in founding former Wonkette advertiser Newsmax, so we feel compelled to say "So long, and thanks for all the greasy misspent rightwing moneez."

Scaife's greatest contribution to American politics was not ideas, of course, but money to fund the promotion of particular ideas, especially the notion that a pretty blandly centrist governor from Arkansas was a flaming socialist, the most corrupt leader in history, and almost certainly (along with his evil harpy wife) at the center of a web of murders and drug-running. The Daily Beast ran a fine where-are-they-now longread back in May, noting Scaife's role in funding the Clinton Crazies; Scaife was easily the biggest (but not the only) money man behind that "vast right-wing conspiracy" that turns out not to have been a figment of Hillary's imagination. And as we know all too well, some never gave up their enthusiasm for proclaiming to the world that a veritable John Dillinger had been in the White House from 1992 to 2001.

Perhaps the weirdest thing about Scaife in his later years is that, a few years after Bill Clinton left office, Scaife became friends with the Clintons, eventually even telling Newsmax CEO Chris Ruddy, who got his start with Scaife money, that the former monster in the White House "had served the American people most ably as president and he held the former president in the highest esteem." Weird bedfellows, right?

Scaife also funded any number of rightwing ventures, not just Newsmax, but also the "Western Journalism Center," which was founded by Joseph Farah (now of WorldNetDaily and airport-handgun-forgetting infamy) and still does its part to keep wingnuts stirred up. And in a strange way, Scaife also inadvertently brought us one of the more useful online resources in taking down rightwing nonsense: one of the lead "investigators" in the Arkansas Project was of course David Brock, who eventually became disenchanted with the wingnut media complex and in 2004 founded Media Matters for America. Who says a leopard never changes his shorts?

And there's Richard Mellon Scaife's beautiful legacy: enough money, applied in the right places, can elevate some illegal but boring misdeeds in a real estate deal into an enormous scandal, with accusations of drug smuggling, murder, and skullduggery everywhere. In a very real way, Scaife helped pave the way for today's 24-hour hyperpartisan screaming in which the arrest of a Benghazi suspect is a distraction from the IRS, and for that, we satirists must thank him and wish that he rest in peace. Now if we could only bury what he did to our politics.