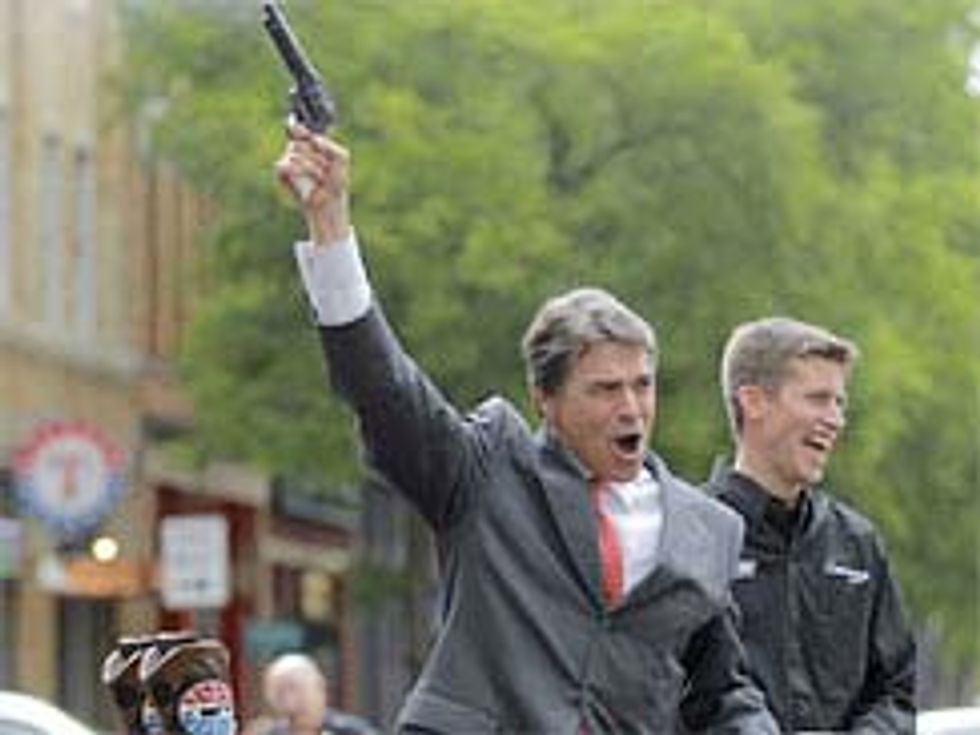 Oh, hey, y'all. Remember that crazy clusterfuck in the Texas Senate, when ladybadass state Sen. Wendy Davis filibustered all goddamned day to stop the menfolk from banning vaginas or whatever? Sure you do, because it was just the other day, and unlike some members of the Texas Republican Party (like this "doctor,") you are not a moron.

Remember how the good guys 'n gals won, and after the Republicans admitted that no, they do not actually have the power to warp the space-time continuum -- or read a clock -- the heinous Senate Bill 5 was officially defeated and the nearly 50 abortion clinics that would have been shuttered were safe?

Yeah, well, fuck all that. Gov. Rick Perry thinks women are sooooooooo precious -- except for this woman, his 261st kill, what he executed just yesterday, but let's not talk about that, that's different, shut UP, sanctity of LIFE, bitchez! -- he's making the Texas legislature come back on July 1 for a Very Special Session to try to make Wendy Davis STFU all over again. Oh yeah: and he also is mansplaining with tender concern about how Sen. Davis should know better than to ever want a woman to make her own medical decisions, since she is a 50-year-old Teen Mom.

PERRY: In fact, even the woman who filibustered the Senate the other day was born into difficult circumstances. She was the daughter of a single woman, she was a teenage mother herself. She managed to eventually graduate from Harvard Law School and serve in the Texas senate. It is just unfortunate that she hasn’t learned from her own example that every life must be given a chance to realize its full potential and that every life matters.

It is unfortunate, isn't it? How could a successful Harvard Law grad/state senator/Teen Mom be so dumb as to not understand the lessons she has learned from actually living what she is talking about, instead of the lessons Rick Perry has learned by ... well ... we mean, he must have learned SOMETHING, right?

"Texans value life and want to protect women and the unborn. Texans want a transportation system that keeps them moving. Texans want a court system that is fair and just. We will not allow the breakdown of decorum and decency to prevent us from doing what the people of this state hired us to do."

So while Perry may insist that it is not decorous and decent for women to be all, like, "GET THE FUCK OUT OF OUR VAGINAS!" and conservatives are SO committed to protecting women, they started this totes clever hashtag #sitdownWendy to tell Wendy Davis to sit down and shut up and make them some sammiches so they can get on with the business of protecting women, on the other hand, there is reality and the will of the people (and the Constitution, by the way) and stuff. That's why Davis says she is SO not done kicking ass, and "[o]bviously we’re still going to fight with every fiber that we have."

Oh, and one more thing:

"I would be lying if I told you that I hadn't had aspirations to run for a statewide office," Davis told MSNBC's Chris Hayes when asked if she would run for governor.