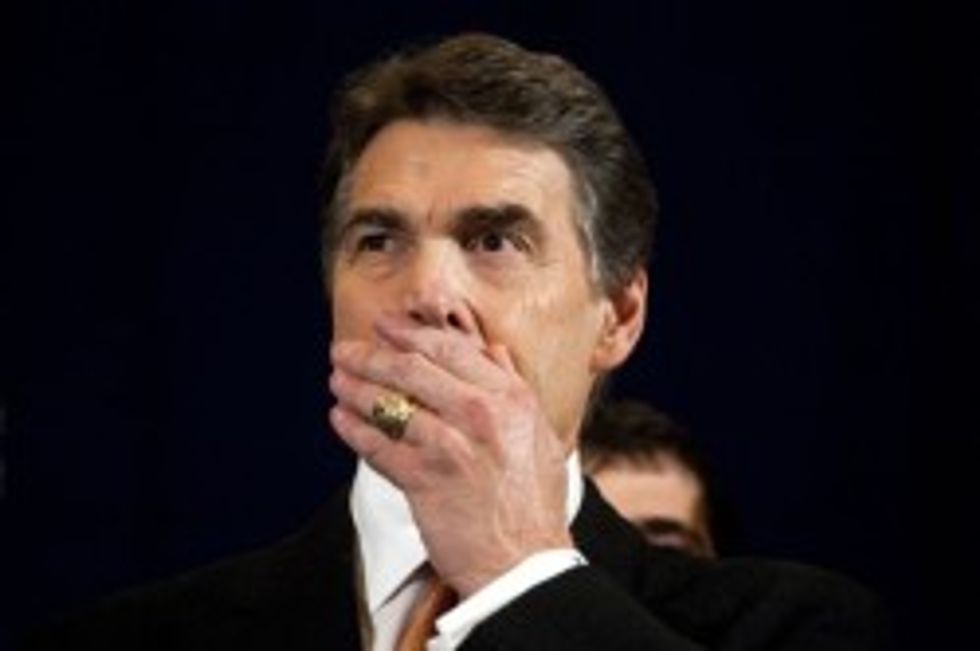 This weekend, when some guy named Evan from theTexas Tribune asked what Anita Perry -- missis to Rick -- thought about all the abortifying going on down in Texas that her husband is so obsessed with getting rid of, Mrs. Perry said:

Well, that’s really difficult for me Evan, because I see it as a woman’s right. If they want to do that, that is their decision. They have to live with that decision.

"Evan" was apparently not sure he had heard her correctly.

Mrs. Perry I want to be sure that you didn’t just inadvertently make news. Are you saying that you believe that abortion is a woman’s right — to make that choice?

It is not mine. It is not something that I would say for them.

And then the guy went on and on about it, repeating that word "choice" and "Are you sure you're sure?" about 100 times. But Anita stood her aborted ground and went so far as to suggest that maybe, just maybe, a gal could even make medical decisions for her ownself, just like if she had a penis and wanted a procedure.

Well I don’t really think that’s making news. I mean, I think that yeah, that could be a woman’s right. Just like it’s a man’s right if he wants to have some kind of procedure.

Oh really now? Anita Perry thinks that what other women do is none of her business and it could be a woman's right to decide for herself what she does at the doctor just like a man can decide for himself? Got it. Y'all reckon Rick Perry got it?

No. Rick Perry did not get it. It is a very good thing Governor Perry has so much experience saying dumb stuff so he knows it when he hears it, otherwise we might think his wife just made the man a tidge to the right of the Westboro Baptist Church on abortion sound like he was married to a sometimes reasonable person. Rick Perry instead explained, “From time to time we’ll stick the wrong word in the wrong place, and you pounce upon it.” What word, Governor? We want to make sure we always pounce properly, but it is hard to hear stuff with your wife's foot stuck in your mouth.

And if Rick Perry, who has announced he will release his grip on the governing reign of Texas next year, thinks he is gonna run for president again in 2016 -- and praise the Lord and pass the ammunition, it looks like he really thinks he might -- he can not possibly have this woman out there sounding like she's talking sense by sticking the wrong words in our pouncing places.