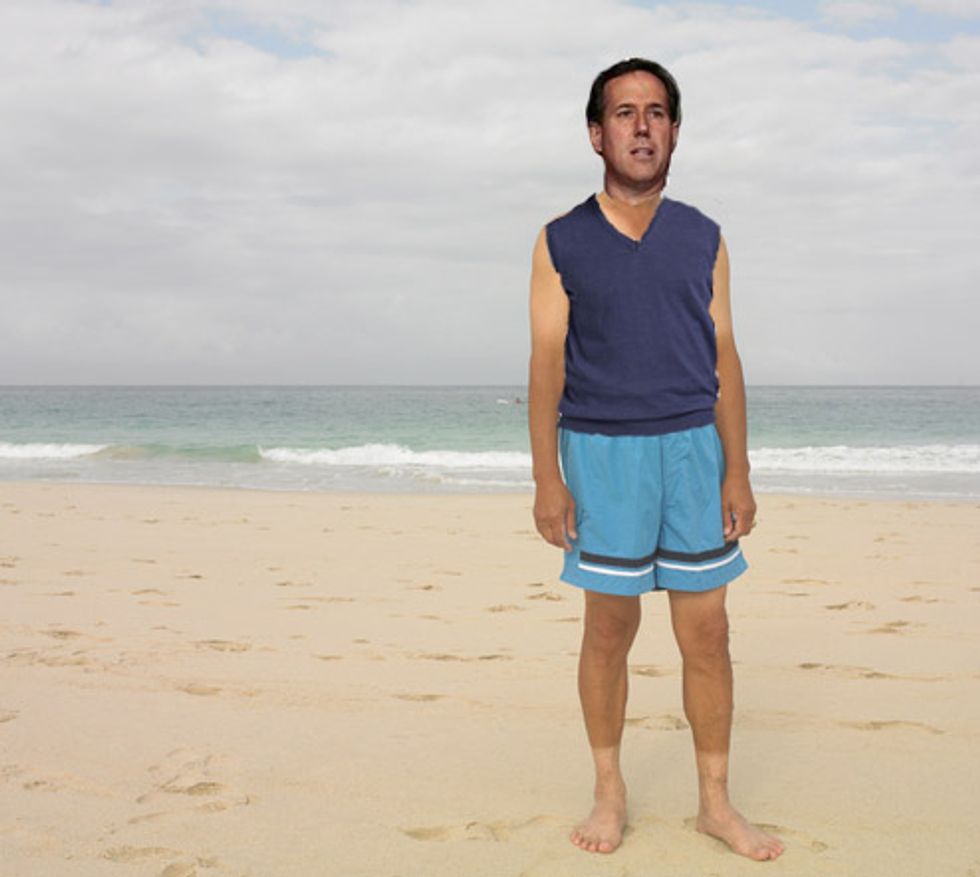 Rick Santorum is a Catholic lawyer who likes long piggyback rides on the beach with Jesus and snuggle time with dead fetuses. Pope Francis is the boss of Catholics, .* One of these men needs to stay out of trying to say words about climate change, and according to Santorum, it's Big Dumb Pope.

What's got Santorum all frothed up? Oh, just that Pope Francis is about to put out one of them "encyclical"-type things, on the subject of climate change. The pope is obviously a Gay Atheist Liberal, because he believes humans are causing climate change, and that humans need to fix it. So Santorum went on the Dom Giordano radio program in Philadelphia, and talked some shit about the leader of God's One True Church:

“The perception that the media would like to give of Pope Francis and the reality are two different things…I’m a huge fan of his, and his focus on making sure that we have a healthier society…I support completely the Pope’s call for us to do more to create opportunities for people to be able to rise in society and care for the poor. That’s our obligation as a society.” [...]

“I’ve said this to Catholic bishops many times — when they get involved with agriculture policy or things like that that are really outside the scope of what the Church’s main message is, that we’re better off sticking to things that are really the core teachings of the Church as opposed to getting involved with every other kind of issue that happens to be popular at the time.” [...]

“The Church has gotten it wrong a few times on science, and I think we’re probably better off leaving science to the scientists and focus on what we’re really good on, which is theology and morality. When we get involved with political and controversial scientific theories, then I think the church is probably not as forceful and credible.”

Hahaha, yes, the Church HAS gotten it wrong on science, many times before! Like that thing they believe about how contraception causes abortion, and that other thing where they condemned Galileo for saying the Earth revolves around the sun, for instance. But the difference this time, Rick Santorum, is that human-caused climate change is not a "political and controversial scientific theory," but rather a thing that 97 percent of climate scientists around the WHOLE WORLD agree is true. The idiots here are the conservative religious people, like Santorum, who believe that real science is a liberal conspiracy.

And New Pope -- which will always be his name, even when he is retired from poping -- has been going on about climate change for a quite a while, despite the fact that Koch brothers-funded goon squads have been trying in vain to make him just please shut up about it. He just won't listen, and Rick will just have to stew in a vat of his own santorum about it, while the pope saves the world.

*Forbes reported that Pope Francis had a Masters' Degree in chemistry. Their original article has been updated to say that they were totally wrong. BAD FORBES!