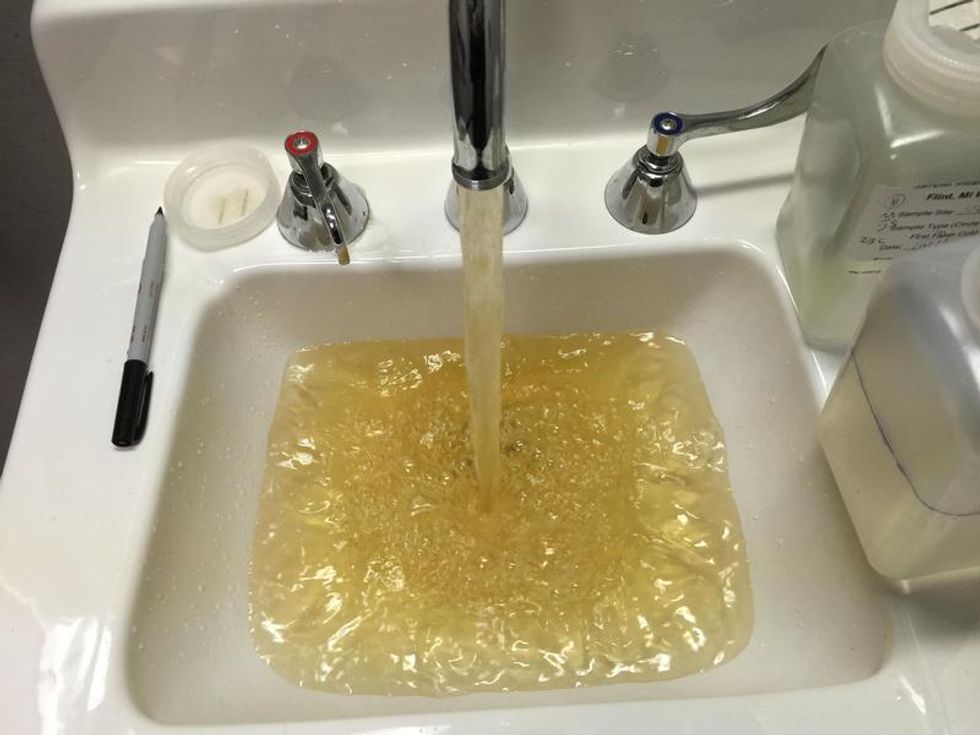 [contextly_sidebar id="qIJSTvNK0JXDVe1d9uR5rKVviBR3dUkD"]Just in case you were feeling extra peppy and cheerful today, we're here to wipe that smile right off your face. Because the water crisis in Flint, Michigan, just managed to get a little bit uglier: in addition to the lead in the water that Gov. Rick Snyder's administration knew about long before the public did, it turns out Governor Smart Nerd's people also knew about a massive outbreak of Legionnaires’ Disease, which killed nine people and sickened over 40 in the Flint area, a good ten months before making the information public. We have a feeling that nobody working in Flint's state office buildings got Legionnaires' disease, either. Snyder administration officials are believed to be working on a way to blame the secrecy on Hillary Clinton's email server.

An email dated March 13, 2015, shows that state officials knew about a spike in Legionnaires' cases in the Flint area last spring, and they were very, very concerned about it. Not about the actual health problems, but about which state or county agency needed to take the blame for the outbreak. Gov. Rick Snyder said on January 13 of this year that he had only learned of the Legionnaires' cases a few days before, but -- funny thing -- based on that and other emails, it now looks like a whole bunch of state agencies knew about the outbreak, but were more intent on downplaying county officials' concerns that the corrosion in Flint's water pipes could be spreading the disease than they were about solving the problem. Or telling the public there was a problem. Yay, Party of Personal Responsibility!

The increase of the illnesses closely corresponds with the timeframe of the switch to the Flint River water. The majority of the cases reside or have an association with the city [...]

This situation has been explicitly explained to MDEQ and many of the city's officials ... I want to make sure in writing that there are no misunderstandings regarding this significant and urgent public health issue.

Three days later, DEQ spokesperson Brad Wurfel forwarded Henry's email to then-DEQ head Dan Wynant and to another state agency director, calling Henry's concerns "beyond irresponsible" and saying that it was county health departments' responsibility to trace the sources of the outbreak, which they hadn't done. Here's that email, an impressive specimen of bureaucratic ass-covering:

Through a FOIA request, the Flint Journal obtained other emails indicating that attempts to investigate the source of the Legionnaires' outbreak "bogged down as key agencies in the probe clashed and the information never reached the public." It's still not certain that Flint's corroded pipes caused the outbreak, but Virginia Tech professor Marc Edwards, who was a key figure in bringing to light the lead contamination in Flint's water supply, said last month that it was likely:

"It's not unexpected that the lack of corrosion control could have triggered that."

"Legionella likes water that has little or no chlorine and has high iron," Edwards said today. "Both those factors would contribute to the growth in Legionella."

So, did Gov. Rick Snyder know about the possible link between Flint River water and the Legionnaires' disease cases before he said he found out about the problem in January of this year? We're inclined to agree with Ectlectablog: Snyder is "either lying about it or he has surrounded himself with people who keep critical information from him, information in this case that could have saved lives."

It would be nice to learn more about all this, possibly through congressional hearings. The House Oversight Committee held a hearing on the Flint water crisis Wednesday, but committee chair Jason Chaffetz (R-Utah) and his fellow Republicans on the committee mostly used the hearing as a platform to yell at the federal EPA for not catching the water problems in Flint sooner, even though the MDEQ and Snyder's emergency managers had caused and then covered up the poisoning of the city. Somehow, despite requests from Democrats on the committee, notably Oversight God Elijah Cummings, Chaffetz never got around to asking Snyder or any of Flint's emergency managers to testify. You'd think they might have some useful information to add to the discussion. The answer is probably to cut funding for the EPA, which is after all only one of those inefficient government agencies that gets in the way of job creators.