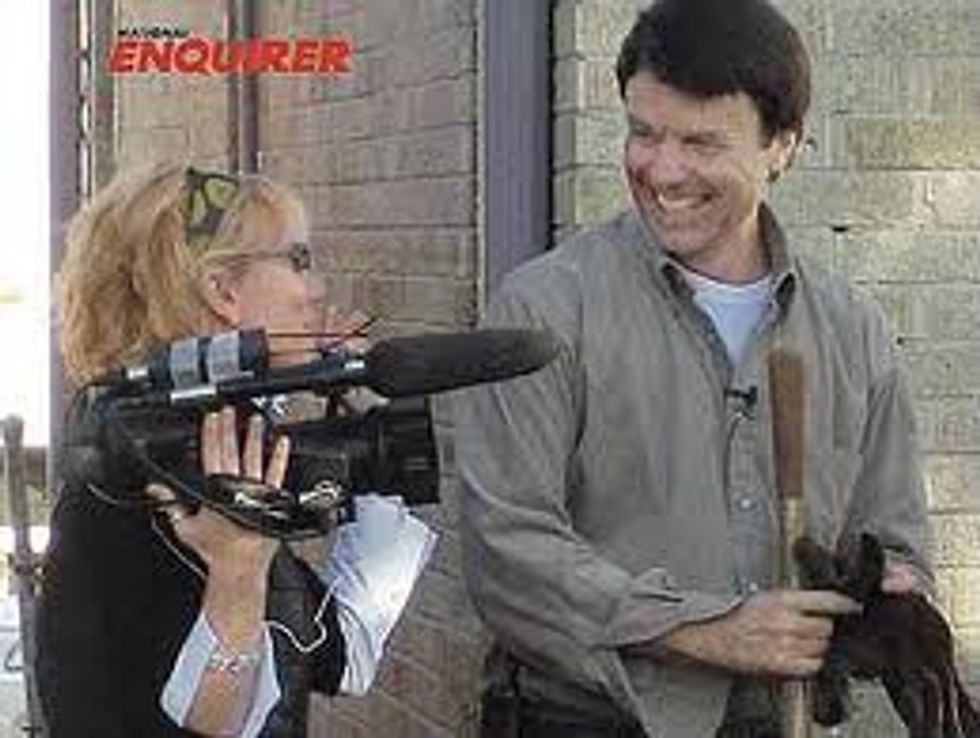 Watch out Liz and Dick, and Romeo and Juliet, and Buttercup and Wesley, and Adolf Hitler and Eva Braun, and Bristol Palin and that creepy Gino guy: Rielle Hunter is here to write the gauzy, Vaseline-lensed story of her Great Love with the world's best husband, father, and all around guy, John Edwards, and it is a tale of Chivalrous and Romantic Love that willleave you breathless!

Like for instance, how John Edwards denied paternity of their lovebaby because he was "temporarily insane" from 2008 until two weeks ago!

“He was temporarily insane” and “needed serious help” when he denied paternity of their child in August 2008, she writes.

“Think about it: Sane healthy people do not deny their children, especially on national TV, simply because they are afraid of their abusive spouse’s reaction. Only a mentally off person would do that,” she says.

Edwards publicly acknowledged the 4-year-old only after the judge declared a mistrial on May 31.

What weird things did Johnny Edwards lie about for no earthly reason, and why does Rielle Hunter understand?

Edwards told Hunter he had mistresses in Los Angeles, Chicago and Florida, but she says she was so wildly in love with him, she stuck with him anyway.

Those women turned out to be a lie. Edwards invented them so he wouldn’t get too serious too fast with Hunter, she says.

”Johnny didn’t do anything out of character. He has a long history of lying about one thing only — women — and I mistakenly thought I was different,” Hunter writes.

“Johnny went on to tell me that the three women he had told me about the first night I had met him were, in fact, not real and that he had made them up . . . My mind was racing.

She says he even made up stories about having taxing break-ups with the ladies.

“He had told me detail upon detail. I remembered the ups and downs of emotion I had felt the night he went to Chicago to break off his relationship there,” she says.

She justifies his reasons for lying to her, believing he didn’t want her to get too attached.

“I really don’t believe his lying about women was malicious. He used it as a defense to keep real feelings at bay,” she writes.

That is ... weird? Really weird? And Rielle also spends a lot of her book's real estate on bashing the late Elizabeth Edwards as an evil witch monster from the Black Lagoon, and that is not very klassy? But let us end with Love, which we are Fools for. Rielle?

“I really have no idea what will happen with us. The jury is still out. I can honestly say that the ending is of no concern to me anymore. The love is here. And as sappy as it may sound, I love living in love."