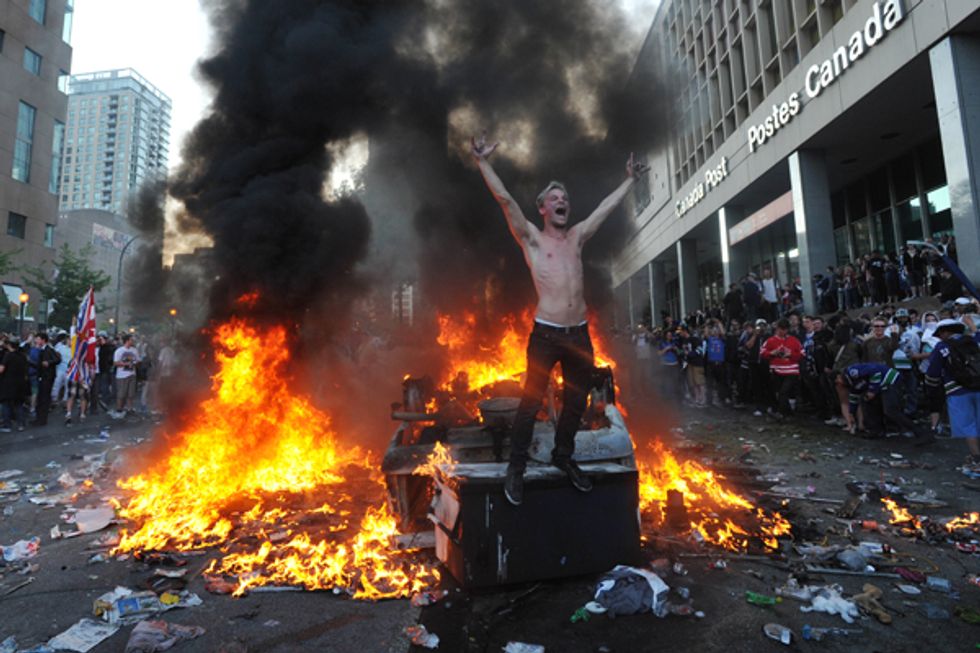 So ... remember how we told you that Conventional Wisdom had already elected House Majority Leader Kevin McCarthy to fill John Boehner's falling-down-drunk speaker shoes, once he gets the hell out of dodge at the end of this month? And how we also told you Conventional Wisdom can be  dumb and wrong, because it's created by Very Serious Inside-the-Beltway dumb assholes, like, say, Luke Russert? (Shut the fuck up, Luke Russert!)

House Majority Leader Kevin McCarthy has abruptly pulled out of the race for Speaker of the House on the same day that he was widely expected to be nominated for the position.

The nominating contest in the GOP conference set for Thursday afternoon in the House has been postponed.

It was not immediately clear why McCarthy, who was viewed as the likely successor to outgoing speaker John Boehner, unexpectedly exited the contest. He told colleagues in a private conference meeting that he was not "the right person for the job," according to members present.

Of course, we were also wrong, but that's different because we don't pretend to be serious journalists:

So start practicing typing “Speaker McCarthy.” And then start guessing what kind of sex scandal will force him to resign from office one day too.

Obviously, whenever a Republican resigns his position as speaker of the House, or resigns the gig before he even gets it, the first and most obvious reason is SEX SCANDAL. And while we had not yet confirmed whether John Boehner was banging Callista Gingrich, now we must wonder if McCarthy was also banging her too! Out of a deep love for America, of course. That's why they all bang her. Or maybe he was secretly banging fellow RINO Rep. Renee Ellmers?Some say!

McCarthy was all set to start swinging his gavel, but then a funny thing happened on the way to the speaker's office. McCarthy made the mistake of opening his mouth and letting words come out of it that, though exceedingly rare for a Republican, happened to be the truth. And that never works out well for them:

Everybody thought Hillary Clinton was unbeatable, right? But we put together a Benghazi special committee, a select committee. What are her numbers today? Her numbers are dropping. Why? Because she’s untrustable. But no one would’ve known any of that had happened had we not fought and made that happen.

That the Benghazi Committee to Benghazi Hillary Clinton Right In Her Benghazi was formed with the explicit purpose of trying to Benghazi her chances at winning the White House was news to precisely no one at all in America, because DUH. That a Republican actually admitted it, however, well, that was a heck of a thing. Naturally, he flip-flopped like a common John Kerry and said that of course he didn't mean the thing he'd said, just the opposite, really, and the committee was about getting to the non-partisan The Truth of how Hillary Clinton personally murdered FOUR AMERICANS and then sent all kinds of secret emails saying "LOL, just killed FOUR AMERICANS, hahaha, they'll never catch me because I'm deleting this email! P.S. Please DVR The Good Wife for me. I'll be at yoga."

And then, hot new sexy plot twist! Rep. Jason Chaffetz (R-Benghazi), who was for abandoning our brave men and women in Benghazi before he was against it, said that no offense, McCarthy's a terrific guy and all, but he can and should choke on Chaffetz's scrote:

I’m arguing that one of my strong suits is actually going on camera and going before the media and making the case to the American people. I think everybody has plusses and minuses. [...]

I think making the case to the American people, and communicating — I want a speaker who speaks!

Things just went downhill from there for poor not-gonna-be-speaker McCarthy. Hillary Clinton made fun of him, for sucking. And then the House Freedom Caucus -- those super-duper extra-far right-wing conservative nihilist splitters who always want to shut down the government because freedom -- announced it wasn't going to back no RINO for speaker, nuh uh, so all of its members were going to support Florida Man Daniel Webster.

And then, on Wednesday, the final kiss of death for McCarthy: an endorsement from Dick Cheney.

I’ve known Kevin McCarthy for many years. He is a good man and a strong leader. As a man of the House and a former member of the House leadership, I know that Kevin McCarthy is the person we need as Speaker in these dangerous and important times. Chaos is on the rise abroad. Russia is exploiting this administration’s weakness, radical Islam is gaining strength, the Middle East is falling apart, and China is asserting its authority in the absence of American strength. The Obama administration has done enormous damage to our military capability and to our relationships with key allies around the world.

Especially when the President refuses to lead, Congress needs to step up to provide for our national defense in support of American power. Kevin McCarthy is the man who can provide that leadership.

Nothing like having Dick Cheney insist you're the right man for the job to make you reconsider all of your life decisions. Including McCarthy's decision to Benghazi himself right in the dick, which he admitted on Thursday "wasn't helpful." Gee, ya think?

So, who's going to swoop in to save the House Republicans from themselves now? Well, it still won't be a lady, like we said already because LOL, Republican Party, yeah right. And contrary to the near-unanimous demands of Twitter, it still won't be Louie Gohmert. With Republicans IN SO MUCH FUCKING DISARRAY, who knows what the hell will happen next? Boehner's stuck with the job, even after he leaves the House, until he finds and trains his replacement. And there's no law that says the speaker even has to be a member of Congress. Heck, it probably shouldn't be, on account of how they all blow so many goat chunks. Hey, now, here's an idea!

Trump for speaker, anyone?