RIP General H.R. McMaster's Credibility! You Will Be Missed! 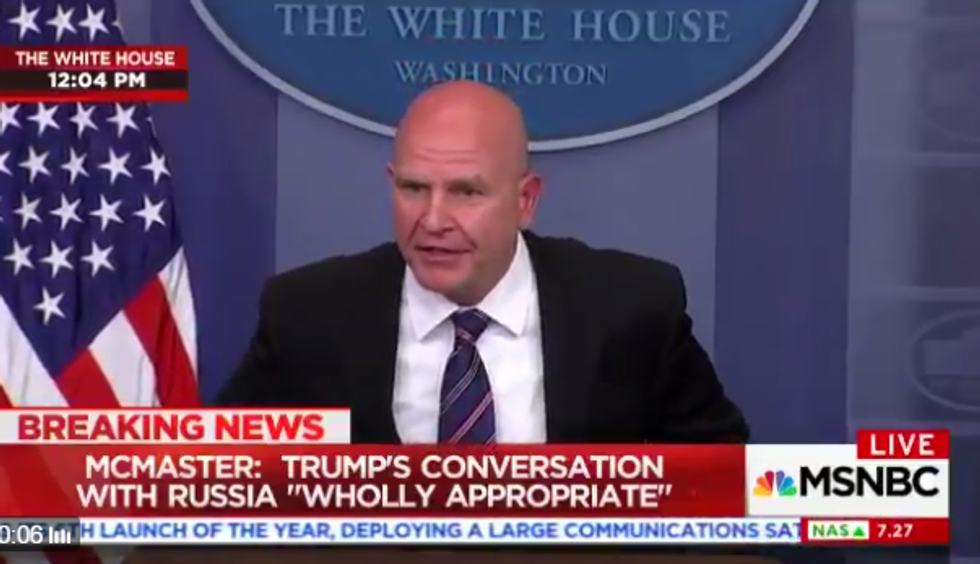 Our latest national security adviser, General H.R. McMaster, a guy we are told has impeccable national security credentials (and who is an actual expert at standing up to shitty loser presidents), gave the daily White House press briefing Tuesday, so he could tell everyone about Donald Trump's exciting upcoming trip to Foreign Places. When he was done, reporters were like, "Oh cool, hope Trump has fun on the airplane, but how's about we talk about how he opened up the book of United States Secrets and did show-and-tell for the Russians?"

Monday night, McMaster said the Washington Post story about Trump's leaks was totally wrong, and then proceeded to deny things the WaPo didn't even accuse Trump of. In Tuesday's briefing, McMaster repeated his non-denial, and then gave his best shot at being simultaneously "aw shucks!" and also "everything's fine!" What really came across, though, is that Trump is an unhinged CrazyPants McBadStain who has no business knowing our state secrets in the first place. The other thing that came across was that the WaPo story was spot-on.

Our favorite part came at the end, when McMaster dropped the bomb that Trump didn't even know the source of the information he spilled to the Russians, so how could he have even known he was telling secrets? For real:

McMaster: "The President wasn't even aware of where this information came from. He wasn't briefed on the source and method." (via @MSNBC) pic.twitter.com/7o5tkqkFVf