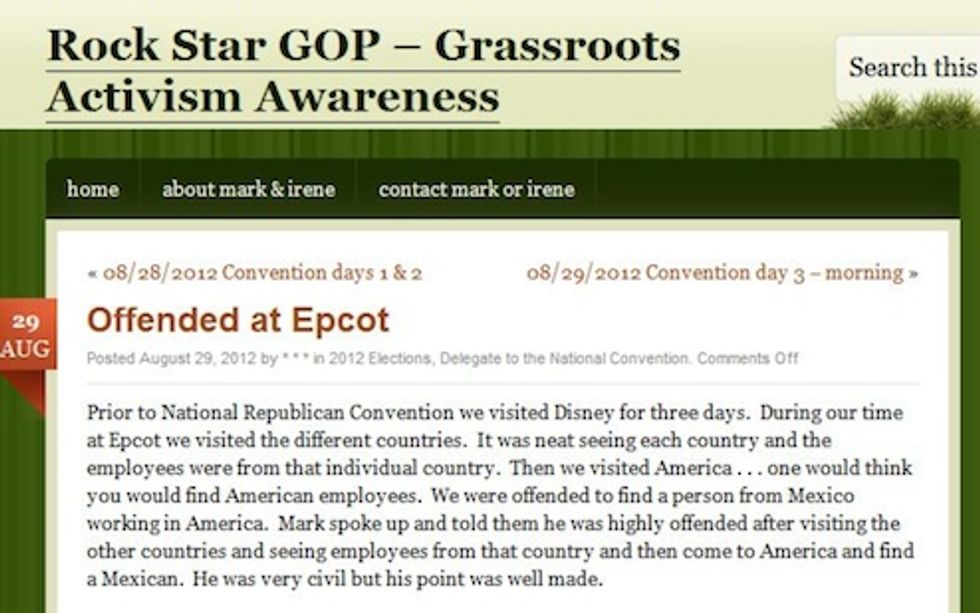 Aw, look atthis nice picture of Mark Harris and his wife, who had a nice time in Florida until they went to the Epcot Center at Disneyworld and were shocked, shocked, to find a Mexican employee working at the American pavilion, which “showcases different cultures in the United States.”

We will admit that we are a little baffled as to the source of this Epcot worker’s Mexican-ness. Was he wearing a sombrero? Doing a Mexican hat dance or the cucaracha? Or perhaps he simply had a Hispanic last name—like, say, “Rubio"? Unfortunately, the Harris' blog is lacking in this kind of detail.

The local GOP in Snyder County, Pennsylvania has rushed to disavow Harris’ overtly racist comments. County Commissioner Malcolm Derk told The Daily Item, “Americans are people of any race, color or heritage. Cheers to the individual working at Epcot for showing what a true American looks like.”

What a surprise, that a couple believing in "very conservative principles" and the "Republican platform" feel that they have a monopoly on American expressions of authenticity, and have determined that there is no room for "Mexicans" in their vision of America. But for purposes of "bias," we'll remind you that there were literally thousands of RNC delegates that didn't throw peanuts at black women, talk to empty chairs, or post racist screeds about Mexicans on their blogs.