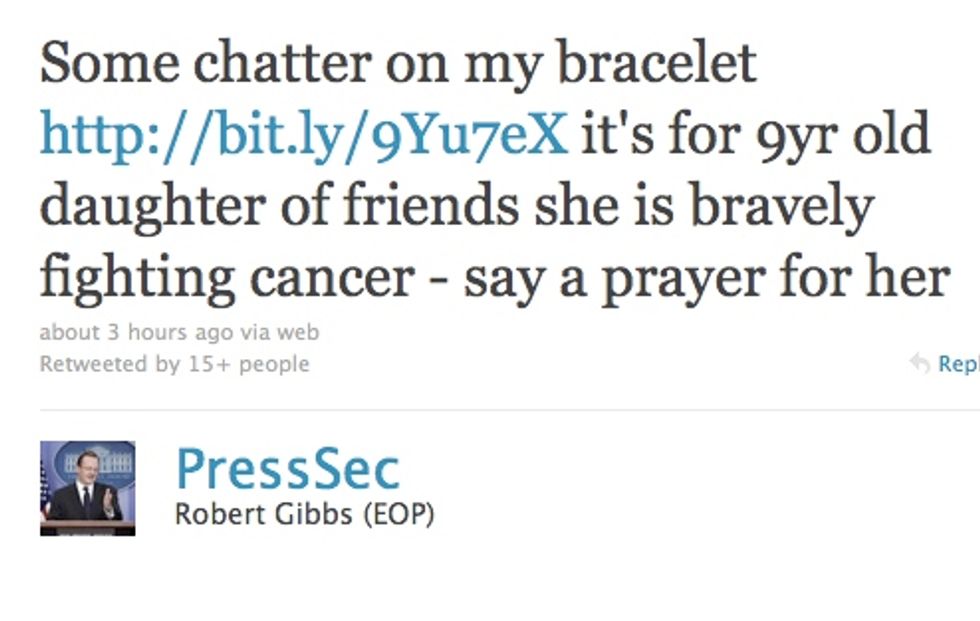 Robert Gibbs was wearing a purple bracelet during his appearance on Fox News Sunday yesterday. Today he explained why, on Twitter. The ol' "kid has cancer" bait-and-switch, he goes with. The "Chicago-Style Politics Excuse." Well, horseshit. Since when dochildren get cancer? Fortunately there's another, more conservative explanation of this bracelet's meaning from Big Government's Kyle Olsen, whose article provoked Gibbs' frenzied Twitter Cover-up.

I thought it was odd that Robert Gibbs was wearing a purple bracelet (and a purple tie) during his appearance on “Fox News Sunday” and CBS’ “Face The Nation.” SEIU president Andy Stern, the top visitor to the White House, wore a similar, if not the same, purple bracelet at one point, too. And in virtually every photo of Stern, he’s wearing SEIU’s purple color.

The bracelet is kind of a signal to tell Stern that the administration has it under control and ObamaCare will be delivered. Just a few more Democrats need to be shown the Chicago way.

Am I making too much out of nothing? Maybe. Who knows.

Don't doubt yourself, Journalist. You're spot-on: "The bracelet is kind of a signal."

This Olsen, who titled his article "Robert Gibbs’ and Andy Stern’s Purple Bracelets a Mark of Clintonesque Solidarity?", backs up his argument by shitting out some old text about Bill Clinton and Monica Lewinsky, and concluding,

Was Gibbs sending a signal to Stern, ala Clinton and Lewinsky? Doubtful. But anything is possible in the lead-up to the intra-Democratic Party showdown to deliver health care reform for Andy Stern and SEIU.

Or a nine-year-old has cancer, ha ha ha. Or that. Well, see you all in Gitmo.