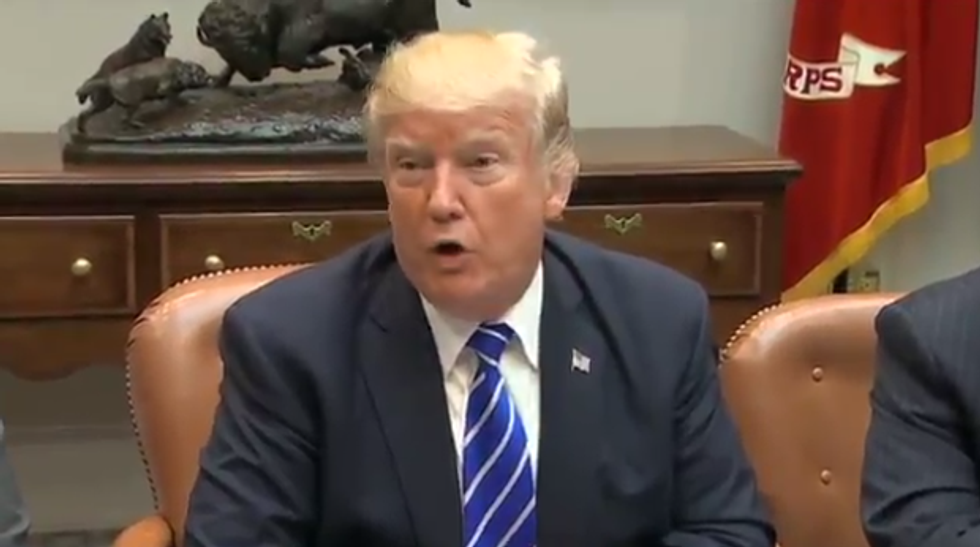 Donald Trump said in July that it would cross the line if Robert Mueller started looking into his creepy Russian money ties, because what on earth would dirty Russian money have to do with an investigation into Trump's dirty ties with dirty Russia? He might as well have said, "HELLO, ROBERT MUELLER, THIS IS WHERE I BURIED THE BODIES!"

Dumbstupid Eric Trump said, long before his dad was pursuing the presidency, that a ton of their business's money comes from Russia (because American banks -- wisely -- refuse to lend to the Trumps). His brother Dumbstupid Junior agreed!

Here is a thing Wonkette said in July, about how IT'S ALL ABOUT THE MONEY:

As Wonk pal Charlie Pierce noted after the eighth person in Trump Jr.’s Russian conspiracy meeting was revealed to be a Russian MONEY LAUNDROMAT, “It Was Always About The Money.” Rachel Maddow has been reporting on the Follow The Money aspect of this pretty much since the beginning. Here’s a thing about connections between Trump and Russia and Commerce Secretary Wilbur Ross, about FOLLOW THE MONEY. Here’s one about Paul Manafort’s Russian money going through Cyprus. IT’S ALL ABOUT THE MONEY.

It is, indeed, all about the money.

Well, it looks like Mueller has followed the money (he's always been following the money), he's brought a shovel, and he's officially digging up bodies:

U.S. Special Counsel Robert Mueller has asked Deutsche Bank (DBKGn.DE) for data on accounts held by President Donald Trump and his family, a person close to the matter said on Tuesday. [...]

Germany’s largest bank received a subpoena from Mueller several weeks ago to provide information on certain money and credit transactions, the person said, without giving details, adding key documents had been handed over in the meantime.

Deutsche Bank told Congressional Democrats to fuck off this summer when they asked for similar information, but we guess it's different when Robert Mueller tells you to swallow this subpoena.

Reuters provides more details about just how much money Trump has gotten from Deutsche Bank:

Trump got a $106 million loan from Deutsche Bank in 2011 to buy Doral, the golf resort in Miami, according to property filings with the local land register. The Doral loans mature in 2023, his electoral filings show.

Separately, Deutsche Bank has lent Trump up to $170 million for the Old Post Office, a historic Washington property where he has opened a hotel.

The bank also gave his Trump Int’l Hotel and Tower, Chicago, a loan of up to $640 million, according to a 2012 property filing.

And Trump still owes the bank a metric shitload of money.

Reuters also notes that in January of this year, Deutsche Bank was fined $630 million for "organizing $10 billion in sham trades that could have been used to launder money out of Russia." Money laundering Donald Trump who what now? Surely an honest broker like Trump wouldn't have been involved in any of that monkey business! OR WAS HE?

Deutsche Bank wasn't just throwing millions of Ameros at Donald Trump's face either. Jared Kushner also got a very strange $285 million loan from Deutsche Bank one month before the election, right when the bank was in the middle of settling all that Russian money laundering business. Kushner used the money to refinance part of a New York building he bought from a company controlled by an Israeli citizen from Uzbekistan named Lev Leviev, who has called himself a "true friend" of Vladimir Putin's. Leviev was also caught up in the weird Russian money laundering case Preet Bharara was prosecuting before he got fired, against a Russian company called Prevezon Holdings Ltd. (And by "caught up," we mean he was a business partner in Prevezon.)

If you'll remember, the Russian lawyer who met with Donald Trump Jr. in Trump Tower, Natalia Veselnitskaya, was on the legal team representing Prevezon.

Obviously this is all totally normal and nothing is amiss.

So is this really Trump's line in the sand, and, faced with the knowledge Mueller is about to fuck him the fuck up (and his little son-in-law too!), will we see a Saturday Night Massacre this evening? Or will the cooler heads of Trump's VERY SMART LAWYERS prevail? Hahahahaha, Trump's lawyers are idiots. In fact, back in the summer, this is what Trump Idiot Lawyer John Dowd said about Mueller looking into Trump's dirty Russian money:

“Those transactions are in my view well beyond the mandate of the Special counsel; are unrelated to the election of 2016 or any alleged collusion between the Trump campaign and Russia and most importantly, are well beyond any Statute of Limitation imposed by the United States Code,” he wrote in an email.

It's Code Red for a Saturday Night Massacre, y'all. Get ready to hit the streets.