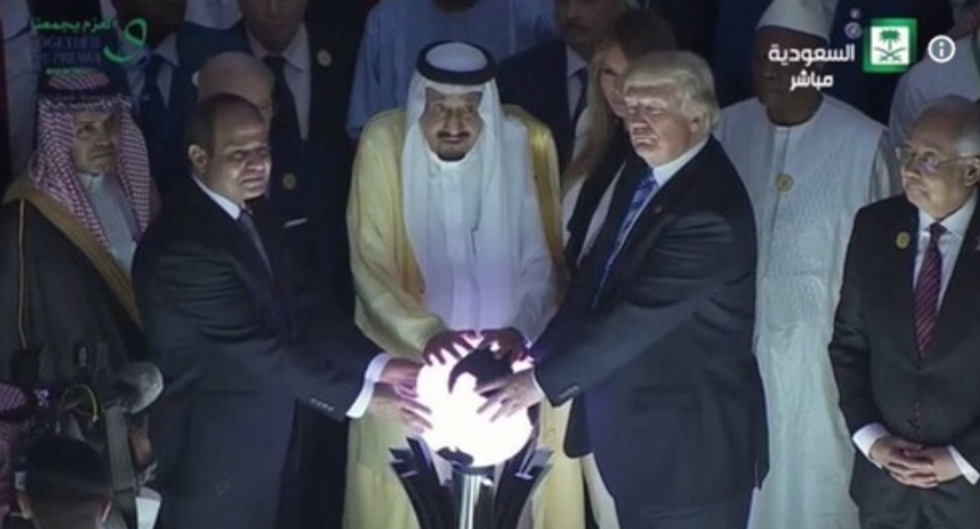 Who's ready for some hot Daily Mail gossip about Robert Mueller's newest cooperating witness (that we know of), George Nader, the lobbyist for the United Arab Emirates who seems to have witnessed a WHOLE LOT of the Trump-Russia conspiracy meetings involving Emirati sheiks, Erik Prince, Jared Kushner, Steve Bannon and Michael Flynn? Well, the Daily Mail says the JOLLY HOT GOSSIP! is that Nader has FLED AMERICA because everybody's found out about all his international pedo crime convictions. We are not sure Daily Mail is correct, because the New York Times says Nader has actually been traveling back and forth between Robert Mueller's office and the UAE, that Mueller has just recently called him back for more testimony, and that Mueller has given him immunity from prosecution, so it's possible Daily Mail just happened to see Nader at the airport and decided to go to print without fact-checking its story. WHOA IF TRUE, right?

Anyway, about that New York Times piece on Nader! It is weird! From what we can tell, dude should probably be glad he's got immunity, because his extracurricular activities for the Trump administration and the UAE have been interesting:

A cooperating witness in the special counsel investigation worked for more than a year to turn a top Trump fund-raiser into an instrument of influence at the White House for the rulers of Saudi Arabia and the United Arab Emirates, according to interviews and previously undisclosed documents.

Hundreds of pages of correspondence between the two men reveal an active effort to cultivate President Trump on behalf of the two oil-rich Arab monarchies, both close American allies.

Oh, how interesting! The two men we are talking about are Nader, of course, and bigwig GOP money man Elliott Broidy, the deputy finance chair of the RNC. On their list of Saudi and Emirati priorities? Firing Rex Tillerson. (Check!) And suddenly being total fuckheads toward our Middle Eastern ally Qatar, where we have a giant American military base, and also CENTCOM. (Check!)

Mr. Nader tempted the fund-raiser, Mr. Broidy, with the prospect of more than $1 billion in contracts for his private security company, Circinus, and he helped deliver deals worth more than $200 million with the United Arab Emirates. He also flattered Mr. Broidy about “how well you handle Chairman,” a reference to Mr. Trump, and repeated to his well-connected friend that he told the effective rulers of both Saudi Arabia and the U.A.E. about “the Pivotal Indispensable Magical Role you are playing to help them.”

Remember when we spent an entire election season hearing about how Hillary Clinton did Pay To Play with her emails, and the Orange Idiot would slowly enunciate the words "Pay ... To ... Play," as if he and his pig-humping followers were trying to learn what it meant together? Dunno why we just recalled that out of the blue.

Broidy, who became BFFs with Nader after they met at the inauguration, says all his actions were for love of country and definitely nothing untoward, and we should probably believe him, because he is after all an RNC money man, and folks like that are downright saintly. (Broidy, by the way, is a literal actual pay-to-play bribery criminal.)

And the fact that Nader, who is paid by the Saudis and the Emiratis, funneled millions of foreign dollars to Broidy, from an Emirati company controlled by Nader to a Canadian company controlled by Broidy, before it finally landed at some wingnutty DC think tanks (to pay for "conferences"), is probably fine and not any evidence of money laundering or Saudi Arabia and the UAE bribing the Trump White House to do stuff. And Nader constantly and insistently lobbying Broidy to set up a secret off-the-books meeting between Trump and the crown prince of the UAE is probably totally normal too.

Broidy even planned a special trip for Nader to get to go to Mar-a-Lago for the celebration of Trump's first year in office, which would have been hella fun had Robert Mueller not met Nader at the airport and stolen his boarding pass.

Remember how Robert Mueller has given Nader immunity? Wonder why!

As Rachel Maddow reported Wednesday night, it's been downright odd watching the Trump administration deal with Saudi Arabia, and suddenly turn against Qatar, starting with Trump's very first trip abroad as president, where he grinned from ear to ear because the Saudis let him play with their big glowing balls. Recently, it was revealed that the Qataris had told the Kushner Companies to fuck off when they came hat in hand begging for a handful of half billion dollar loans, and we've wondered if that contributed to why the Trump administration turned on Qatar last summer, supported the Saudi blockade against that country (WHICH IS AGAIN WHERE CENTCOM IS, and also 11,000 US TROOPS), and suddenly accused Qatar of being a big state sponsor of terrorism -- something the Saudis NEVER HAVE EVER DONE on an Indian summer morning in September of 2001 in lower Manhattan.

Now, we're learning there was also a yearlong lobbying operation/Tinder date between a big RNC money man and a lobbyist for the UAE and Saudi Arabia, that may have involved dirty foreign bribe moneys, that seems to have been pushing Trump toward the same objectives. And this stuff is all so significant that Robert Mueller is ALL THE WAY UP ITS ASS.

What does this all mean? Well, we're not sure yet! But we imagine we'll be learning more and more about it in the coming days. In the meantime, watch your Rachel: